I have purchased both versions of e.l.f. Eyelid Primer and e.l.f. Mineral Eyeshadow Primer. The former retails for $1 USD and the latter for $3 USD.

Currently, I have not tried the e.l.f. Studio Eye Primer & Liner Sealer, which also retails for $3 USD.

I’ll be upfront about my initial thoughts on eyeshadow primers in general. Until late last year, I had never used any sort of liquid primer on my lids and only resorted to using Everyday Mineral’s base after I read on their (now defunct) forums that everyone needs to use primer with mineral shadows. I was skeptical, not to mention unwilling, to buy Urban Decay’s Primer Potion.

At one point I did attempt to purchase the mineral primer from e.l.f., encouraged by the rave reviews from EDM members and its $3 price tag, but the product was unavailable. I managed to get one in my next order, but didn’t use it often, preferring the EDM base instead.

When I placed my large e.l.f. Studio BOGO order this past November, the Eyelid Primer had just been released. Recalling how difficult it had been to purchase the mineral primer, I did the sensible thing and grabbed three.

Since that point, I have used the Eyelid Primer almost daily and absolutely love it. This product really does live up to its claims. Of course, I cannot compare e.l.f.’s performance to some of the department store counterparts, but they are good enough for me.

The Mineral Eyeshadow Primer comes in a traditional cylindrical tube constructed from soft, matte plastic. The hard plastic lid has a light matte, black finish and the e.l.f. logo embossed on top.

The Eyelid Primer totally wins in packaging with its funky and unique shape, reminiscent of Urban Decay’s Primer Potion. The tapered tube is constructed from a soft, rubbery plastic that feels nifty to the fingers. The flared plastic lid has a shiny black finish and lacks an embossed logo.

The containers hold a surprising amount of primer. I didn’t think the Eyelid Primer would last as long as it has, but I’ve used it for a few months now and there’s still a lot of product there.

The two primers are nearly identical in consistency and colour.

The Mineral Eyeshadow Primer is slightly thicker and pinker than the Eyelid Primer. The primers are only available in one nude colour each, both named Sheer. The e.l.f. website “swatches” show a significant colour difference between the two, but I assure you that they are almost the same in person. 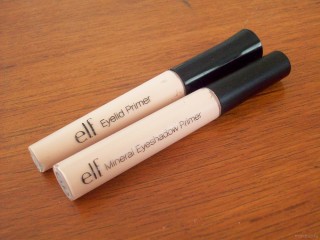 The consistency of both is kind of weird and squishy (so specific, I know). It’s especially noticeable when the applicator moves around in the tube. I’ve racked my brain trying to think something similar to this texture and unfortunately came up blank. Anyway, my understanding is that the Urban Decay Primer Potion is thicker than both of the e.l.f. primers, but I’m going by hearsay.

Despite the price difference, the ingredient lists are very similar and from what I can tell, the two appear to be paraben free.

As for performance, I’ve been impressed by both. I’ve only noticed my eyeshadow start creasing last year, one motivation I had for buying the e.l.f. primers. Since I began using them, I rarely have significant creasing with any shadows, either mineral or pressed. If I do, it’s usually due to a long day. I’ve also noticed the primers help shadows apply more evenly to my eyelids.

I generally use the Eyelid Primer more often than the Mineral Eyeshadow Primer. I find the thinner consistency easier to apply and blend into the skin. Also, I tend to confuse the mineral version’s container with my e.l.f. Mineral Lip Gloss. There have been a few too many mix ups and near misses for my liking. :pray: Other than that, I don’t have a good reason to prefer one over the other.

I highly recommend the Eyelid Primer and the Mineral Eyeshadow Primer. Both deliver on some high promises and are great values for their respective price tags.

Are they as good as the department store versions? Probably not, but I have stated that the e.l.f. products are the first primers I’ve ever tried.