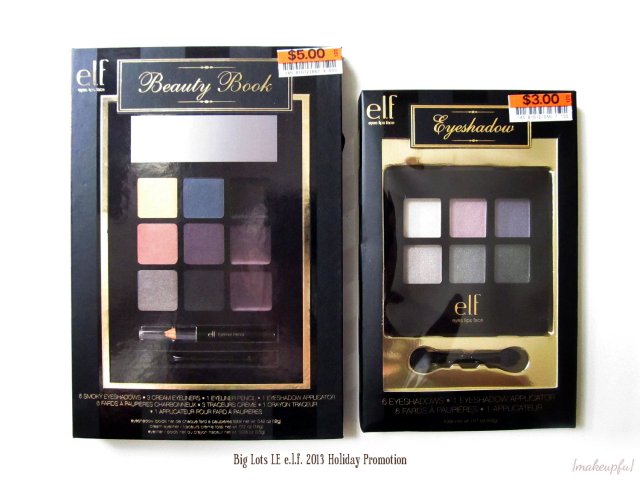 I had read on the Internets that Big Lots consistently carries e.l.f. items. Unfortunately for me, the two Big Lots located nearby closed their doors ten years ago. While they were apparently profitable, they were not profitable enough.

The next closest Big Lots store is about two hours away in Davenport, IA, so I haven’t been inside of one this past decade. My husband’s family conveniently had a holiday get-together in Davenport after Christmas.

The Big Lots in Davenport was really run down and I didn’t have much hope of finding anything worthwhile when I first stepped into the store. I couldn’t have been more wrong.

There was an e.l.f. display full of holiday sets right near the entrance that I originally thought might be from a Sears collection. During my visit to Big Lots, these sets specifically were discounted (I visited a couple of days after Christmas), but the overstock sets were not.

After doing a bunch of online research, I’ve concluded that the gift sets with black on black packaging are actually Big Lots exclusives. Geez, e.l.f. is making deals with everyone! Gone are the days when e.l.f. was a Target exclusive. This now makes Target, Walgreens, Sears, Wal-Mart, Kmart, and Big Lots partners with e.l.f. I’m sure there are more businesses out there that I don’t know of, due to my geographical limitations.

Honestly, I thought these were overstock items so I didn’t look closely at what was available. There were so many e.l.f. exclusive for the 2013 holiday season that the sets have run together.

If I had known these were Big Lots exclusives, I probably would have bought more. It’s been about a month since my visit, so I’m not sure if they’re still in stores. The Big Lots website said there was low stock, but that they are still available (somewhere). Unfortunately you cannot order through the website.

Beauty Books are my weakness and I found this super unique version that contains six eyeshadows and—get this—three cream eyeliners! I initially believed them to be cream shadows. I wondered why they were super dark, but I figured it was due to being the Smoky Edition. It wasn’t until later that I finally read the front of the Beauty Book and discovered what they really were.

There was at least one other Big Lots exclusive Beauty Book that contained nine eyeshadow—sans cream eyeliner—, called the Everyday edition.

I also bought a little 6-Piece Eyeshadow Palette. These are occasionally hit or miss, but the quality for this version is good. It reminded me of the palette that was released for the very first Target’s Back To School promotion years ago. Unfortunately I trashed the packaging without looking on the back, so I have no idea what the palette is called. And I’m usually so thorough about such things.

Once I had taken stock of the Big Lots e.l.f. exclusives, I moved on to the cosmetics section. It was a complete wreck. There was product everywhere. 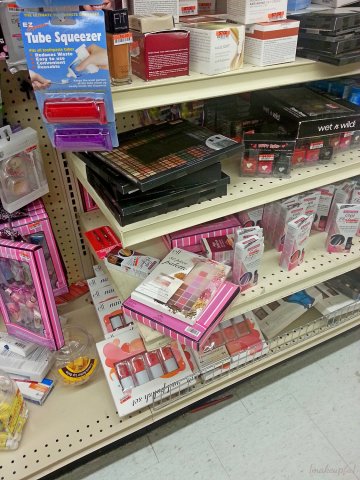 Apart from the e.l.f. items that I will discuss in a second, I found a slew of China Glaze crackle polishes (will they ever die?), as well as a bunch of Wet n Wild sets (none were vegan).

There were a ton of various e.l.f. promotions, though mostly from the Spring 2012 collection. I can’t believe there are still this many spring sets floating around two years later. You can read my review on the e.l.f. Spring 2012 4 Piece Nail Polish Set and 32 Piece Palette: warm eyeshadow that are pictured above here.

I also spotted one of the nail sets that I had been trying very hard to find: a 4-Piece Nail Polish Set in Trendy for the e.l.f. Spring 2013 promotion. I had wanted the Beachy version more for the Sunflower and Fairy Dust polishes that I have since acquired. But I had just bought a bunch of polishes, not to mention that I don’t really wear e.l.f. polishes that often and I already own half of the shades. After a long internal struggle, I satisfied myself by photographing the set and put it back. 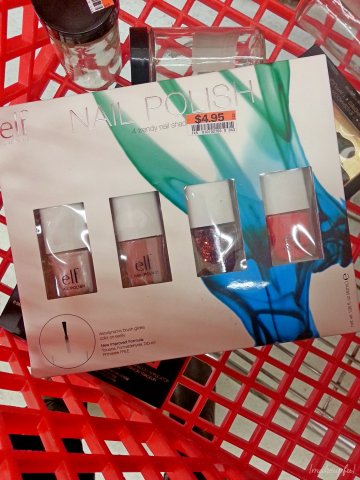 The set includes the following four polishes (from left to right): Metallic Elegance, Nude, Blushing Bombshell, and Mango Madness. To see swatches you can visit Beautylish (the original site, Beauty by Krystal, no longer has the images).

What I didn’t find

I still can’t find anything from the uber LE Python series. I keep hoping I’ll find it someday, but it’s becoming more and more unlikely. 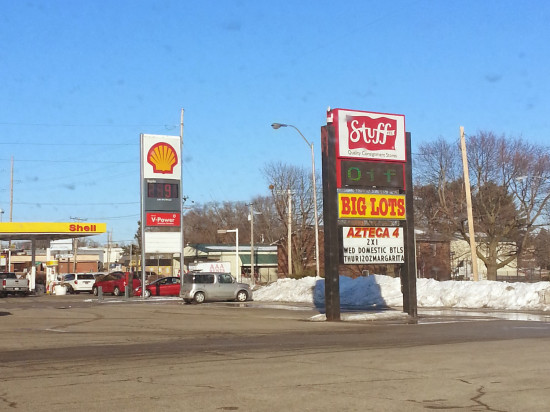