I’ve found that when I miss Target e.l.f. promotions, I can often find them at Gordmans—a T.J. Maxx of sorts in the Midwest (still wasn’t been able to locate the elusive e.l.f. Python collection, though).

Such was the case when I realized after the fact that I was interested in the 4 Piece Nail Polish Set that featured peachy corals and pinks. I had seen the polish set at Target when the Spring 2012 collection was new, but it hadn’t caught my eye at the time. I was disappointed to find everything sold out at my local Targets until I remembered Gordmans. Sure enough, I found most of the Spring collection on their shelves. 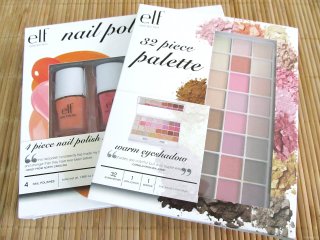 Not only did I manage to pick up a nail polish set, but I also decided to give the Spring 32 Piece Palette a try as well. Initially I was leery of this palette due to all of the pinks and yellows, but I thought I’d give it a shot. 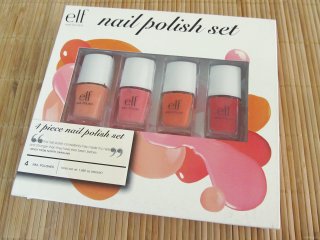 All shades have a creme finish. A great set of trendy colors for the spring and summer months.

This is the first time I’ve seen e.l.f. nail polishes with white, matte caps. Unfortunately, they are thin, flimsy and one has already torn. Very disappointing.

Fortunately the colours are as pretty on the nails as they are in the jar. There is, however, some colour separation with every shade and it is particularly bad with Smokin’ Hot. No amount of agitation seems able to fix this. There is always a layer of white film at the bottom of the bottle.

Some of the colours have odd names. I would have switched Coral Dream and Party Peach. And Flirty Fuchsia isn’t fuchsia at all, more a bright pink. Then again, I don’t think I’ve seen an accurately labeled fuchsia from e.l.f. 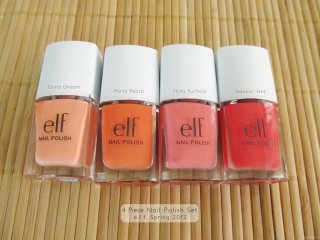 A very pretty, light peach shade. I did have some issues with streaking, though, even with two coats.

A nice coral shade that is not nearly as orange as photos indicate. Covers well with two coats.

From the swatches I had seen online, I expected Party Peach to be really orange, but I actually like it better than Coral Dream.

A bright pink shade, with minor fuchsia undertones. Even with two coats, I had streaking problems.

I looked up fuchsia on teh Wikipedia and think maybe e.l.f. was channeling Pantone’s 2001 color of the year, Fuchsia Rose.

It appears that Smokin’ Hot technically doesn’t have an apostrophe at the end, but that feels so grammatically incorrect.

This wonderful candy apple red covers like a dream. It has by far the best coverage, even with one coat.

There are problems with the polishes, notably the streaking and color separation, but e.l.f. did a good job assembling four trendy colours in one set. The price isn’t bad either.

Of the four, I highly recommend Smokin’ Hot and Party Peach. 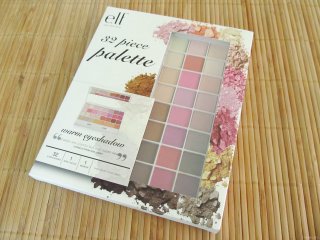 There are 32 eyeshadows in this palette, as the name suggests, most of them light-colored mattes. An unusual move by e.l.f. since their strength lies in darker metallic/shimmer shades. Also, many of their matte shades look similar when applied to the eye, i.e. pale, chalky color. 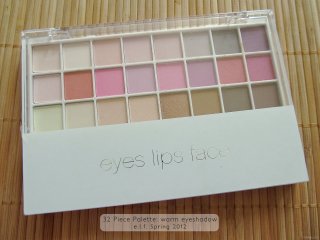 The packaging is white for the first time. It’s a refreshing change. Still flimsy like its predecessors.

This is a nice looking palette, aesthetically speaking, but I think there are too many hot pinks and yellows to be wearable for most people. The colours are pretty, but I would only wear about half of them on a daily basis. I have tried some of the colours, but I fear most will remain untouched. 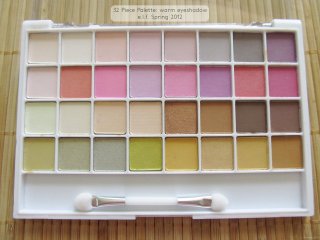 I was leery of the palette in the first place because of the pink and yellow shades, but I purchased it based on favorable reviews I had read. After purchasing and using it, I think my initial impression was correct. 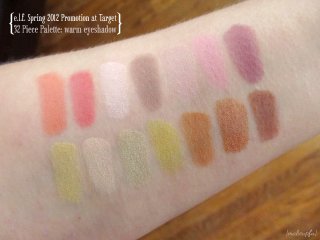 It’s not a bad palette per se and there are plenty of nice shades. But while unique from their traditional palette line up, I just don’t think this is one of e.l.f.’s best palettes. However, even with the iffy colours, $5 isn’t a bad price to give it a try if you’re curious.