I don’t know when it happened, but the Studio Minty Lip Glosses have been discontinued. They have likely been replaced by the Studio Glossy Glosses and Glitter Glosses.

I remember being super excited to try e.l.f.’s Studio Minty Lip Gloss when it first came out. I am one of the few users who actually like the plumping side of e.l.f.’s Essential Plumping Lip Glaze and wanted a similar, all-in-one minty lip gloss with colour. 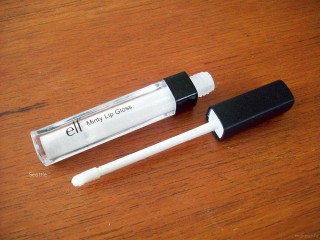 Rating: B
Shades Available: 8 shades
Where to Buy: Discontinued

It was during one of e.l.f.’s massive sales, that I first decided to try three shades: Seattle, Miami, and New York City. I later found more at the local Dollar Trees to round out my collection.

The packaging looks really promising. Until you see it in person. The rectangular tube would be cute and stylish if only it wasn’t so darn big and bulky. It seems e.l.f. has the right idea when it comes to packaging, they just have bad implementation. Reminds me of Victoria’s Secret Lip Gloss. 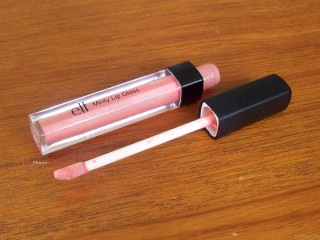 Like so many products by e.l.f., I soon discovered that the packaging is intentionally misleading. In a redux of the Plumping Lip Stain, the tube holds a very small amount of product. Most of the tube is clear plastic, distorting and magnifying the true amount of product it contains. The product reservoir appears to be only slightly larger than the width of the sponge applicator, and that’s not very wide. 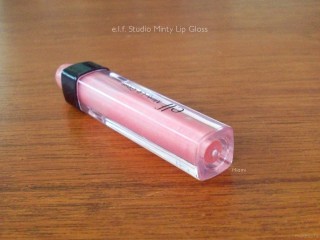 The plastic tube intentionally magnifies the real amount of gloss.

Also, the lid is not the highest quality. The top of my New York City shipped broken. The first time I attempted to unscrew the lid, the black shell pulled off the wand applicator part. 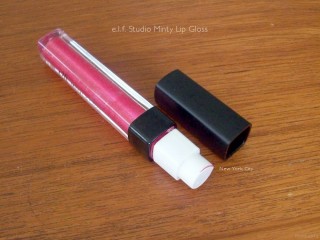 I pushed the black lid section back on, and it stays most of the time, but the point is that this has happened to a lot of customers besides me. Clearly this is a common issue with the glue used to attach the parts together. It didn’t occur to me until later that I should have tried to return it.

Each shade is named for an American city, an idea I rather like. All of the shades are very sheer and feature lots of chunky glitter, something that disappointed me, since I was hoping for a product similar to the plumping gloss of the Plumping Lip Stain that had a pearly finish.

Before I continue on to the individual shades, I have to comment on the aftertaste of the Minty Lip Glosses. When first applied, the glosses have a nice (in my opinion) minty feeling, but after a few minutes it dissolves into this really icky, sugary aftertaste, reminiscent of sucralose. I can’t stand it. It’s up there as one of the worst tasting e.l.f. products, right beside the Super Glossy Lip Shine SPF 15.

I wasn’t looking for a clear, minty and sparkly lip gloss and wouldn’t have bought this shade had it not been for the name. I lived part of my childhood in the Puget Sound region and just had to get it. Honestly, Seattle could have been vibrant green and I would have ordered it.

Not much to comment on, except that Seattle is a clear gloss with lots of chunky, glittery sparkles everywhere–and they are noticeable. This isn’t like some of the other e.l.f. products that have obvious shimmer in the tube, but not on the face. No siree! You can definitely see these sparkles.

Can’t stand Florida (lived in Pensacola for six months), but I love this shade. Miami is a straight up sheer peach shade with some sparkle. The glitter is noticeable, but not overwhelming. Great for a nude look.

Some of you may remember that e.l.f. released a bunch of limited edition 2009 Holiday products for Target, including an Essential Hypershine Gloss and Essential Super Glossy Lip Shine in New York City. These two products were very sheer, with little colour payoff, and clearly came from the same dye lot. 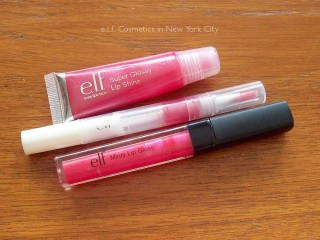 While similar in more ways than one, this New York City Minty Lip Gloss is a noticeably different shade. It is still a vibrant, hot pink in the tube, but also has little colour payoff on the mouth; either a good or bad thing, depending on one’s perspective on the colour hot pink.

Originally I was not too pleased with this shade, but after trying it again, I find it applies as a pleasant, sheer pink. Though this shade does have some glitter, it’s not as noticeable as Seattle.

I had high hopes for e.l.f.’s Minty Lip Gloss and was disappointed by what I found. Since originally purchasing them, I have considered and rejected reordering the glosses several times.

First, the packaging is intentionally misleading and I dislike that e.l.f. continues this practice. Either be a little more honest or raise the price. I would much rather pay $3 USD for the e.l.f. Mineral Lip Gloss than the same for this product.

Second, and I cannot stress this enough, I don’t like the sucralose aftertaste. This is the primary reason I don’t wear the glosses on a regular basis. And let me go on the record that the Super Glossy Lip Shine flavour doesn’t bother me that much, so I have some pretty high flavour tolerances.

Of course, I know in the end I’m going to break down and order some more Minty Lip Glosses (Nashville looks awesome o(@_@)o ). But when I do reorder the glosses, I’m going to do so in a sale, because I don’t want to pay $3 USD for a misleading product with a horrible aftertaste.

Bottom Line:
This product is probably best suited for younger consumers looking for a sheer product with lots of sparkle. 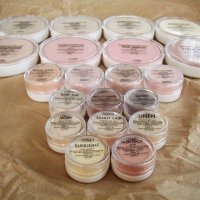