When I think of the e.l.f. Studio line, invariably the original, cool toned e.l.f. Studio Tone Correcting Powder, aka Complexion Perfection, comes to mind. Not only has it been around forever, it’s widely available at retail stores. As an example, I’ve found it at Target, Kmart and Hyvee grocery stores.

I have collected all three versions of the e.l.f. Studio Tone Correcting Powder over the years, with the most recent acquisition of the Warm version during the e.l.f. 9th Anniversary Sale in August.

Each of the palettes include four different shades pressed into a single pan.

The main problem the e.l.f. Studio Tone Correcting Powders face is that they are mostly translucent and therefore don’t work as advertised. It seems most reviewers use the powders as setting powders for the face and/or under eye area instead of as a color corrector.

The powders are packaged in the classic, matte black plastic compacts that e.l.f. Studio is known for and feature a huge mirror inside. There are no applicator wells. It is just one huge pan. There are little silver labels with the shade names on the bottom of each compact. 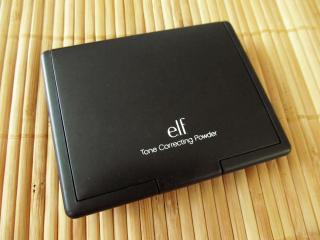 My original Tone Correcting Powder (Complexion Perfection) compact in Cool is much clunkier than the other two. Somewhere along the way, e.l.f. decided to thin out the plastic to make the compact sleeker and a wee bit smaller. The compacts look much better now.

The Tone Correction Powders are silky smooth and finely milled. I do have some problems with dryness while using the powders, so those with dry skin beware.

Despite trying all three versions, I don’t see much color correcting. I put Warm and Cool on each side of my face and could not see a difference between them. And if you apply too much of Warm or Cool you can end up with a whitish cast, so don’t pile it on.

Unfortunately, the product is incredibly powdery and particles start flying everywhere the moment the brush hits it.

When I first bought the Tone Correcting Powder, I thought you used a specific color for whatever skin problem you had. If you had dark under eye circles, you would use the yellow shade. If redness, then the green.

Turns out you’re actually supposed to swirl a brush through all the colors to blend and apply it to the face.

But I don’t see how this would work because you’ve just made a new color. For example, foundation is made with a bunch of colors like iron ochres and red/blue/yellow lakes, yet no says that the yellows and blues in the foundation will correct certain colors when you apply it to your skin. This is because they’ve been to combined to create a flesh color even though the individual color particles are still there floating around. I’ve used foundation for the example, but the same holds true for eyeshadows and blushes.

So, I still think that using the colors individually works better than using them combined.

The e.l.f. Studio Tone Correcting Powders currently come in three shades/palettes, with two ostensibly being color correctors and the other functioning more like a highlighter.

The original Cool palette was originally named Complexion Perfection and has four shades for color correcting, like yellow to combat purple areas or green for redness.

I’m not sure exactly why I bought this other than I’ve tried to order it several times and always put it back. While the Warm version is closer to my skin tone, it doesn’t really matter because it applies mostly translucent.

Most notably, there isn’t a green to help reduce redness.

I’m really clueless as to why this is considered a tone correcting powder. It’s just shimmery. I don’t understand why e.l.f. didn’t put it with the Studio Bronzers and call it a highlighter version.

Then again, the Shimmer Tone Correcting Powder does not have much shimmer once applied to the skin, despite how it appears in the pan. It’s much more subtle than one would expect and can easily be worn during the day.

Like many e.l.f. products, I don’t consider the e.l.f. Studio Tone Correcting Powders to be amazing. However, I don’t think there’s any harm to try them when they are so inexpensive.

Just be aware that there’s really not any difference between the Warm and Cool palettes and the Shimmer version is exactly what the name indicates.