Pros: Glitter is evenly mixed, color is a nice nude shade with a little kick
Cons: Formulation is a little thick, no ingredients listing

I was really interested in Lacey’s Pumpkin Spice Latte by Femme Fatale Lacquer when I stumbled across it on Instagram last year. I didn’t realize it had an extremely limited run until I tried to purchase it. This year I was able to pre-order it.

This LE polish has already had it’s 2013 run, but due to its popularity it might be available next year. Look for an announcement early fall on the Femme Fatale Lacquer Facebook page. 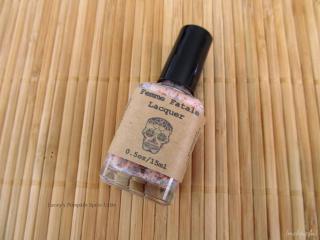 This polish is the most expensive polish I’ve bought (I usually balk at anything over $4). That’s how much I wanted to get my hands on Lacey’s Pumpkin Spice Latte. This is also the first indie polish I’ve purchased.

The polish was packaged in a small, Tyvek bubble mailer. Aside from the polish, I received a PayPal receipt with a handwritten thanks, business card a ticket for a raffle drawing.

The nail polish is packaged in a 15 ml rectangular glass bottle with a short, glossy black handle. Pretty standard stuff. 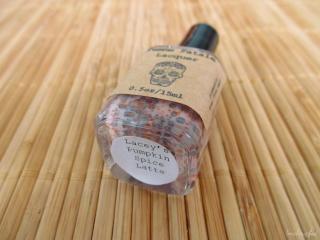 The Femme Fatale Lacquer label is a kraft paper sticker featuring the company name, weight, a skull illustration logo, and warnings. There is a circular sticker with the shade name on the bottom.

An ingredients label is conspicuously absent.

All polishes sold by Femme Fatale are cruelty free and 3 Free. From the website:

Each polish is made with clear suspension base combined with micas, pigments, and/or glitters which are all non toxic. All polish bases used are 3 FREE and none of my products are tested on animals! I only use stainless steel mixing balls for all my polishes.

The polish covers very well though I found the formulation to be a little thick. Since I don’t often wear nail polish, my skills in general are lacking and I had some difficulty arranging the glitter. After working the glitter into place, I usually had polish built up along the sides of my nails.

As such, I won’t be showing swatches. You can find swatches of Lacey’s Pumpkin Spice Latte at PackAPunchPolish and Lace & Lacquers. 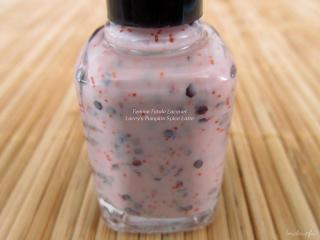 I think it lives up to hype. One thing I love is how the polish is a neutral shade, but with a little kick. It’s a nice and subtle glitter polish, if there ever was one.

I am so happy I finally got my hands on this polish. I hope to wear it a lot during the autumn season.

Now I just need to work on my glitter arranging skills.