I was super excited when this product initially came out. I was hoping for an e.l.f. version of the Urban Decay 24/7 Glide-On Shadow Pencil. The Studio Waterproof Eyeliner Crayon came out the same time as the e.l.f. Essential Jumbo Eyeshadow Sticks.

Unfortunately, the Studio Waterproof Eyeliner is a disaster.

I bought two eyeliners during last year’s Black Friday sale. After I received the eyeliners and had a disastrous experience with them (more on that later), I checked the reviews on the e.l.f. site and discovered the eyeliners had been removed from the site. That’s unexpected since e.l.f. almost never discontinues products. I figured I was not alone with my terrible experience the product was a dud, and consequently e.l.f. promptly removed them from their website.

I was surprised to later find the eyeliners back on the site. Judging by the universally terrible reviews, the formulation remains the same as when I purchased it.

Judging by the product description, you are theoretically able to use these eyeliners as either liners or as a lid color. The latter is the reason why I purchased them. Unfortunately, they work as neither.

I realized a couple months ago that I don’t have many critical reviews up on {makeupfu}. This isn’t because I’m trying to please some sponsor or I’m really good at picking wonderful products (I’m not). Mostly, it’s because I want to recommend good, quality vegan products to my dear readers. And I also tend to banish the bad products and not think of them again. I’ve since realized that I’ve done a disservice to my readers, and have started writing more reviews on dud products.

That leads us to today’s review. This of the first “F” rating I’ve assigned to a product (updated to 0 stars). The Studio Waterproof Eyeliner Crayons received this rating because it does not work. Normally, I try to give products a fair shake, but I truly believe this is one of the worst cosmetics products I’ve ever tried.

I don’t care if these eyeliner are waterproof or only three dollars, this is a bad product. I refuse to even link to the product directly.

The eyeliners are packaged in a plastic tube with a twist-up bottom and a clear plastic lid.

They are somewhere between the chunky tubes of the e.l.f. Essential Jumbo Eyeshadow Sticks and the thin tubes of a regular eyeliner. 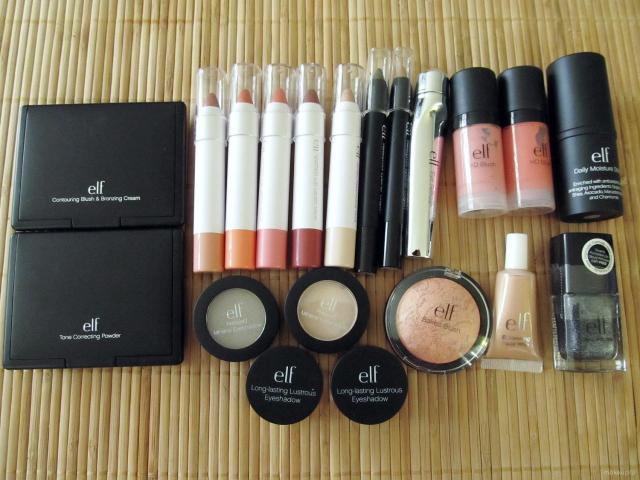 Here, you can compare the differences between the Studio Waterproof Eyeliner Crayons
and the Essential Jumbo Eyeshadow Sticks

They’re average and work, but there is nothing either wonderful or terrible about the packaging.

After a few attempts at swatching, the Brown eyeliner didn’t break, but rather detached from the bottom.

I’m not going to beat around the bush. The formulation is terrible and that’s what makes the rating so low. This is a very hard and solid product.

Like I mentioned earlier, the eyeliners don’t work. That may sound weird, but they really don’t. A hard coating forms over the crayon and won’t produce any color. I have to rub the liners on the back of my hands until the outer layer of the crayon comes off and then the color appears.

They look so nice. Before you try them. 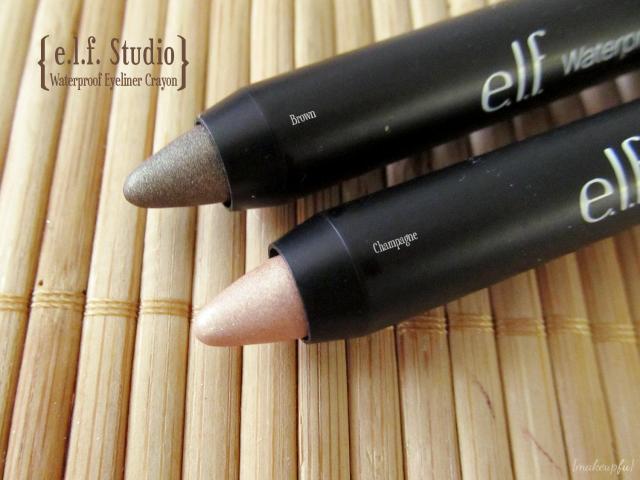 Close up of the e.l.f. Studio Waterproof Eyeliner Crayon in Brown and Champagne

The waterproof claim does hold up fairly well. One of the problems with having to rub the eyeliners against your hand to get the color started is that you end up with eyeliner marks on your hand.

There are seven shades, but I bought two in Brown and Champagne.

The colors themselves are lovely, provided you can press hard enough to have them show up. I think the lighter shade would have worked well as a lid color of it was softer. 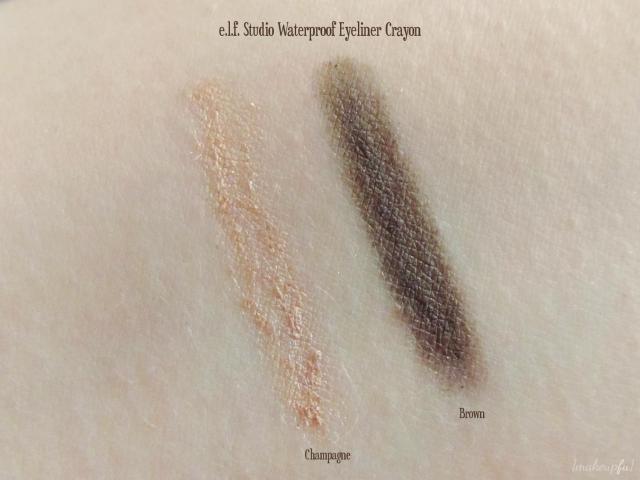 Swatches of e.l.f. Studio Waterproof Eyeliner Crayon in Brown and Champagne.
This swatch of Champagne is more accurate than the other photo.

This is a pearl brown with strong green undertones. The micro-glitter isn’t too noticeable once applied.

I have much more difficulty producing any color with this one, as you can tell from the swatches above.

I strongly believe that no one should buy this product in its current incarnation.

Hopefully, if we don’t buy the Waterproof Eyeliner Crayons, that will force e.l.f. to reexamine the product. I would love for e.l.f. to reformulate this product. The liners have so much unrealized potential and the colors are nice.