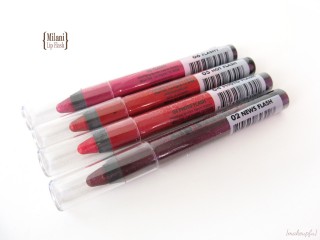 The Milani Lip Flash line appears to be discontinued. I found all of the following shades at my local Dollar Tree. I’m not sure how the timeline works out, but these lip pencils appear to be clones of the Urban Decay Super-Saturated High Gloss Lip Color.

Technically, I’m not sure that this product is vegan, so I’m putting it on my “probably vegan” list. Milani doesn’t have a vegan list, as far as I know, so it’s up to the individual to decide for themselves. The Lip Flashes passed my vegan threshold but others many find some materials objectionable. I have posted the ingredients for transparency’s sake.

I recently learned that Milani is cruelty-free, as well as vegan friendly. For some reason, I always thought Milani was not cruelty free, so I never looked very closely at their products. You may see Milani nail polishes at Dollar Tree, but I usually avoid them because it’s such a quagmire; I’m still not clear which polishes do and don’t contain guanine.

I’m a little annoyed with myself because I had all these photos taken, and had even started editing them, when I found the Star Flash shade on a subsequent Dollar Tree visit. I really hate it when I have retake all of the photos because I bought a new shade. I need to just buy everything in the beginning.

The Lip Flashes I found at Dollar Tree were packaged in a hanging blister pack. This must be an anti-theft tactic since I’ve never seen Milani packaged as such in drugstores.

If I have to be brutally honest, I don’t exactly have the best lipstick application techniques. Maybe it’s one reason why I prefer lip gloss. That’s why I really like the lip pencil format. It’s so much more precise than using lipstick.

Ingredients for the Milani Lip Flashes

The pencils themselves are well-designed and you get a lot of product. The labels are similar to the actual color of the pencil—with the exception of Star Flash—and that makes them easy to pick out in your makeup drawer. 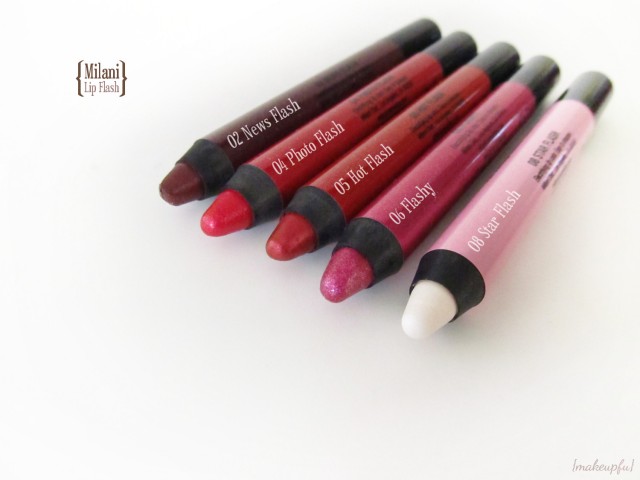 Milani did a great job matching the label to the actual product color
(e.l.f. should look to Milani for inspiration)

The formulation of the Lip Flashes are similar to lipstick. One reason I don’t usually wear lipstick is because I find it drying. The same is true here.

Due to the pencil format, you do need to apply the lipstick carefully to ensure even coverage. Otherwise, they glide on smoothly. 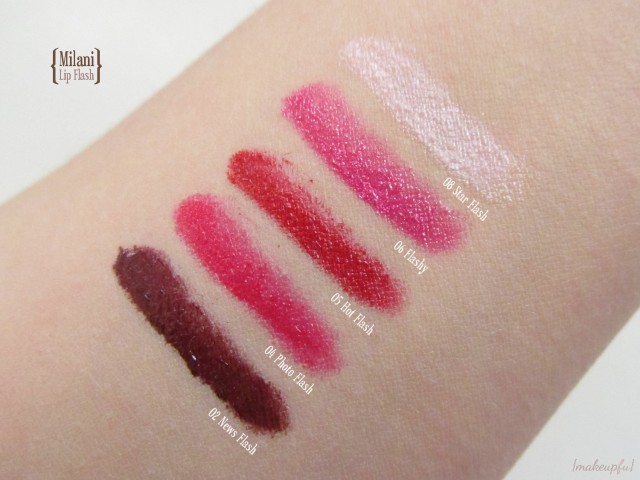 Swatches for the Milani Lip Flashes

The pigmentation is out of this world. Frankly, they are so pigmented and bright, that I don’t feel comfortable wearing them out of the house when I’m out doing errands. 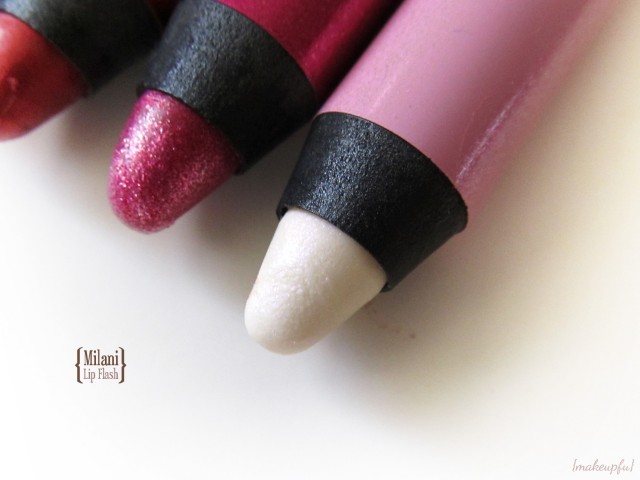 There is definitely an iridescent sheen to all of the shades. They are like the duochromes of the lip products world.

In addition to the trademark shimmer all of the Lip Flashes have, two of the shades I own have noticeable, large glitter flakes.

There are eight different shades. Between the two visits at Dollar Tree, I found six, including the brown, 01 Lip Flash, that I did not buy and is not pictured. The swatches I’ve seen online for Lip Flash are really pretty and I’m completely kicking myself for not buying it.

Every pencil has incorporated the word “Flash” into their shade name. 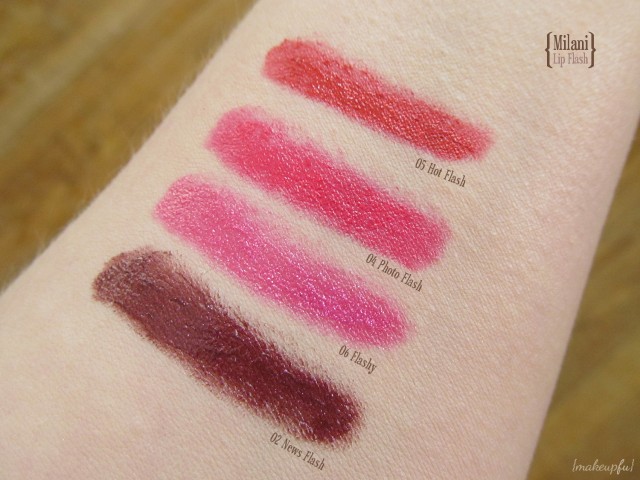 You can sorta see the iridescent flash in this photo

I can’t believe I actually passed on 01 Lip Flash because I thought it was too dark and brown, yet turned around and bought this shade.

It’s a very distinctive and pretty, dark purple that borders near brown, but it doesn’t work for me. I think I need to be four or shades darker than my skin tone (or either really bold or into goth—of which I am neither).

I have found that if I remove it with a tissue and then apply a clear lip balm, there is enough color left to look good.

A dark pink, with large glitter flakes. It looks very similar to Hot Flash, but when applied it is clearly pink, not red.

This is probably the best vegan red lipstick ever. It’s about as true red as you get without using carmine.

Flashy is a fuchsia with tons of chunky glitter flakes. I think there’s more glitter than lipstick in here.

I totally thought I could pull off this shade, but instead I look like I’m in a sci-fi movie. It’s a very interesting shade, but definitely not appropriate for everyday wear. Due to the purple iridescent shimmer, it comes across as a near white, lilac color.

Star Flash emphasizes every line and imperfection in your lips. It turns out to be the least wearable shade of the bunch.

As hard as I tried, my camera was inadequate to capture the purple luminescence. Both the swatches and product photos ended up washed out in all the images

I’m totally torn on this product. I absolutely love the super pigmentation and bold colors, but I also don’t think I could wear any of them in my normal activities. So they just sit sadly in my makeup drawer.