Do you like thrift store hauls? I know that I always enjoy seeing what others have found on their excursions. Normally I’m scouring the shelves for things like dishes and bakeware, but this time I focused on clothing. Okay, okay. It’s actually because there was nothing of interest in the dishware section. Zip.

I needed to go to my local Goodwill this past Tuesday in a mad, last minute dash to find a vest for my son’s school project. Surprisingly, we found a suitable item on our first attempt. We ended up spending around twenty bucks for everything, although there were some other non-clothing items in that total.

Up first is this brown double-layered skirt I got for $3.38. I just love it. The tulle isn’t a full-length underskirt, but rather a couple of layers attached to the bottom of the underskirt.

I was super excited about this tie dye skirt because I love muddy colors like these. This was also $3.38. I’m not sure if it’s designed to be a skirt/dress combo, but it definitely doesn’t work on me as a dress.

The length is a really good fit for me, since it hits me on the middle of my shins. Makes me wonder where it’s supposed to hit on normal sized people. Below the knee, maybe? 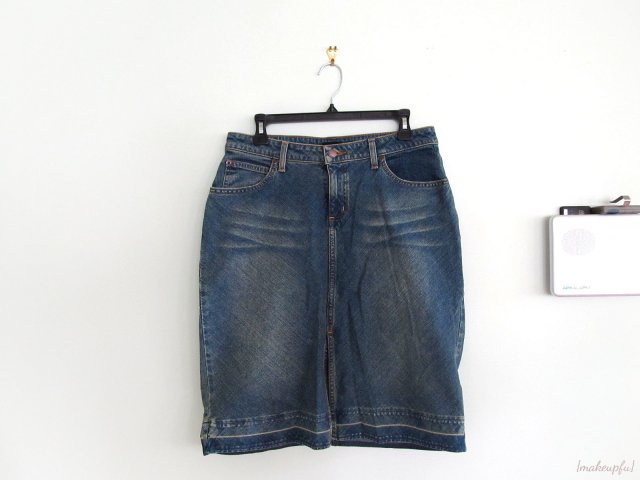 I have a lot of short skirts. And I don’t often wear them because I’m not comfortable wearing short clothing (I also don’t like exposing my knees). Due to my phobia of accidentally exposing myself, I was happy to find this knee-length jean skirt. This one was half off at $1.69.

I was super excited to find this vest! The very first time I watched the video for SNSD’s Mr. Mr., I knew immediately that I wanted my costume for Halloween this year to be based off the black & white, vest-and-fedora-wearing dance section. Fortunately, I own almost every single item needed for the costume. The only thing missing was a vest. I couldn’t believe that I found something suitable on my first attempt. It’s a little large, so I might bring it in a bit on the sides if I don’t ultimately wear a jacket over it.

I have a bad track record when it comes to Halloween. A couple of years ago I wanted to dress up as Ranka Lee from Macross Frontier (sometimes it helps to be super short). I planned ahead and ordered a wig and costume online in July. I received the wig…but never got the costume (I did get a refund). Last year I tried to be Leez from Kubera, but I guess I decided to late and couldn’t find anything suitable.

I tried on everything and it looks like the outfit works! I have this pink/purple plaid shirt I was planning to wear, but I might switch to a white button-down. I’m also considering using the Ranka wig this year to be a Sunny inspired costume, considering we’re about the same height anyway. 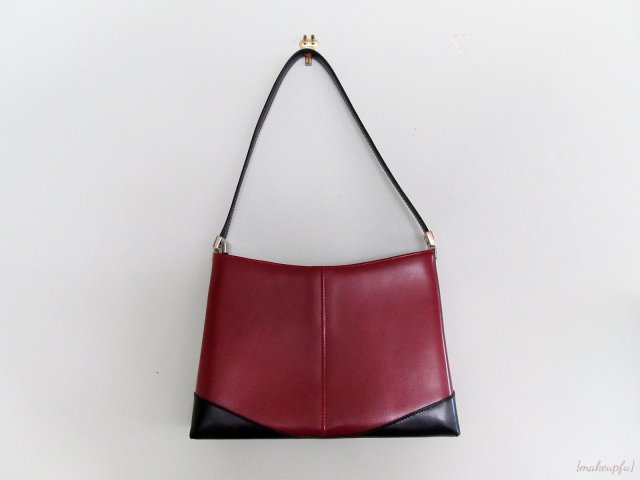 I also got this nifty red purse for a couple of bucks, as well as a pair of jean shorts for $1.69.

When I searched for the shorts section, I found the main rack and picked up a few things to try on. It wasn’t until we were leaving that I spotted the many, many displays at the front of store. I guess the menfolk in my life are rubbing off on my (lack of) observational skills. 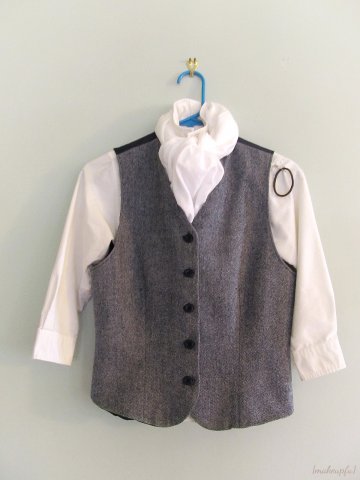 So, my son was Alexander Hamilton for his 4th grade school project. This vest is actually a woman’s item (shh, don’t tell my son!), but it fit well enough. We already had the cotton button-down shirt, and in a moment of desperation, grabbed a flour sack towel I had bought to embroider and used that as a cravat. I thought I might make one, but discovered online that cravats have a very specific shape. I had zero desire to pull out the sewing machine I haven’t used in years and fiddle with something that would be used for just one day.

I had my son wear a pair of khaki pants and we used one of my hair ties to pull back his (longish) hair. He’s really sensitive about tight-fitting clothing so I even though my history-obsessed self wanted to get super accurate, I had to satisfy myself with putting together something he would willingly wear for an hour.

We actually had six weeks to prepare for this disaster, but several miscommunications with my kid left us unprepared and scrambling at the last minute for props and costume ideas. Fortunately, the 18th century happens to be one of my favorite eras in Europe/American history. I still can’t believe we pulled a relatively believable representation of Hamilton in a day. I may be biased here, but I thought my son looked really cute.

I also learned on this little adventure that modern printers can detect the pattern on the newest bills to prevent you from printing money. You would hope the printer would realize that if you’re printing out a bill the entire length of letter paper (well with in the legal size requirements set by the Secret Service for printing color copies) you’re not going try spending it at Nordstrom. We had to settle with giant—and laminated—versions of the two previous designs.

I hope you enjoyed this haul as much as I have!