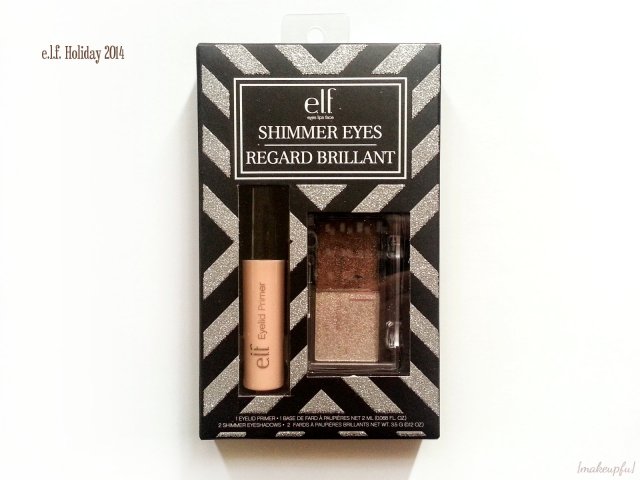 A look back at the two piece—sometimes three piece—e.l.f. Holiday Shimmer Eyes set for today’s Throwback Thursday installment. This eye duo was available during the Holiday 2014 season, containing two eyeshadow colors and an Essential Eyelid Primer. The set retailed for $3 USD.

e.l.f. is a cruelty-free and mostly vegan-friendly brand, with the exception of a few Essential brushes. Visit the brand here. 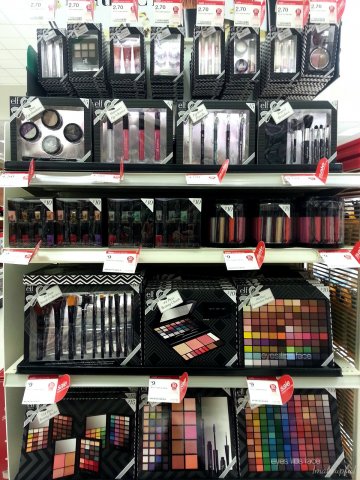 e.l.f. Holiday 2014 end cap display at Target.
The Glitter Eyes Set is the third box from the right on the top row.

The Essential Eyeshadow Primer in the shade Sheer is packaged as a round tube instead of the tapered bottle of the permanent line. The Holiday version contains less product than the regular one, at 2 ml/0.068 fl oz versus 5 ml/0.17 fl oz respectively. 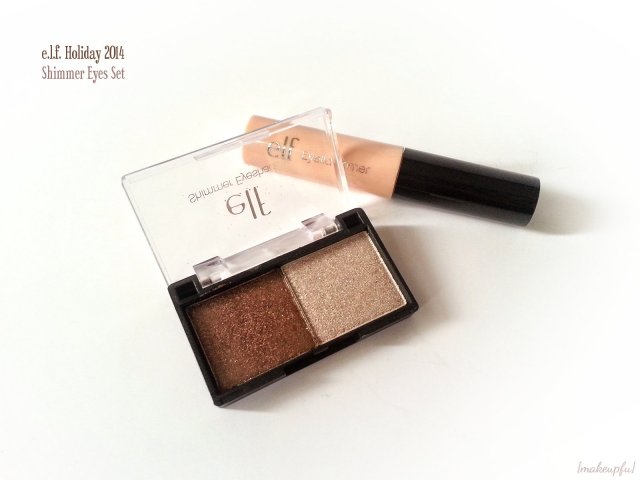 The eyeshadow colors are packaged in a rectangular plastic compact. I personally think the compact looks cheap, though the plastic is sturdy enough. The two square pans sit in the bottom of the black plastic base. The lid is completely clear, with the words Shimmer Eyeshadow below the e.l.f. logo. I’ve rarely used the eyeshadows, but the silver lettering has almost completely rubbed off over time.

There are no brushes or sponge-tipped applicators included in this set.

The formulation of the Shimmer Eyeshadows is atrocious. I expect the light glitter shades to be horrible, since they are a common addition to their LE palettes, but I was surprised that the brown was likewise terrible. Both shades are essentially large glitter flakes barely pressed together to make an eyeshadow. Just touching them with an eyeshadow brush causes the product to flake everywhere. 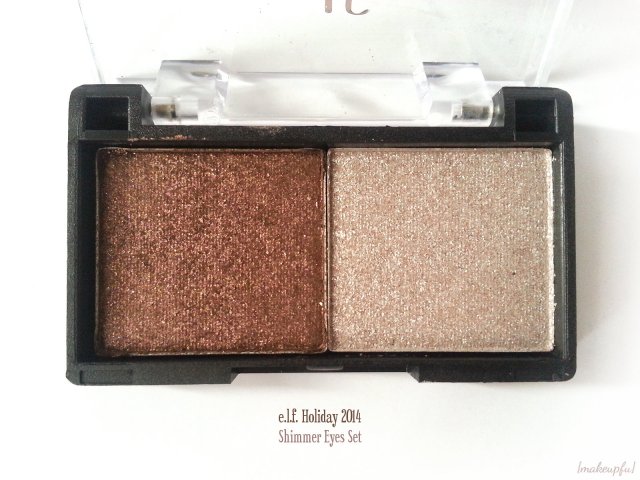 Don’t even bother trying to apply these shadows dry. They flake all over the place while barely giving any coverage. Foiling is the best way to apply the shadows, though the brown is very patchy and doesn’t want to stick to the brush. You’ll still get tons of fallout with either color, even with foiling.

The included Essential Eyelid Primer probably does not have enough tackiness to deal with the large glitter flakes. I used the e.l.f. Essential Glitter Primer for the swatches in this post.

The Essential Eyelid Primer comes in the shade Sheer. Though it is a light beige color, it should be sheer enough to work with most skin tones.

The two Shimmer Eyeshadows are a champagne and a coppery brown. Both have a glittery finish. And I do mean glittery. The colors are very pretty in the pan, but the brown doesn’t show up well on the eye. It’s very patchy and you’ll need several layers to build up the color.

The champagne color is very pronounced and does a great job catching the light. I couldn’t get a good photo of this shade because the light kept hitting it, concealing the pretty faint pink in the color and instead making it appear bluer than it is.

If you can make the shadows work, and ignore all of the fallout, the eyeshadows are very pretty. However, they have a very glittery finish that is not suitable for most occasions. Plus, have I mentioned the fallout?

Overall, I’m disappointed in this set. This isn’t a Shimmer Eyes set, it’s a Glitter Eyes set. And that’s exactly what the Target version calls it. e.l.f. has produced some very beautiful shimmery eyeshadows, so I don’t know why this set was such a miss.

I had thought I saw this set recycled for the 2015 Holiday season, but maybe not. If it is reintroduced in the future, give it a pass. Even at $3, this set is not worth your time.