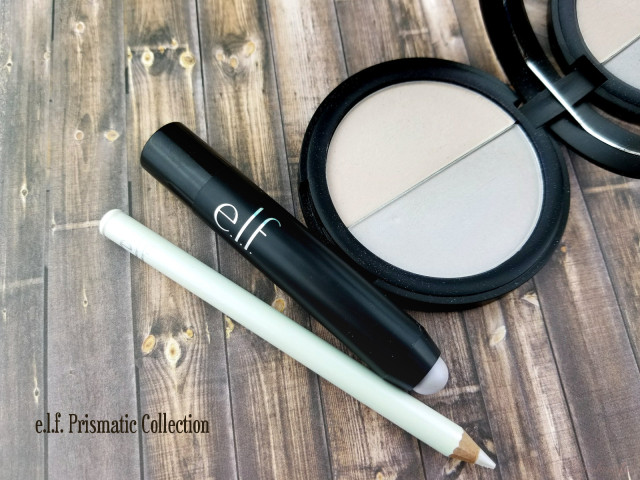 Hi all. Long time, no blog.

Today I’m here with one of e.l.f.’s newest collections, the Prismatic Collection. You may be more familiar with this line by its original name, the Holographic Collection. About a month after its debut, the collection was renamed since there is nothing holographic about these products, aside from the holographic labels. At least it saves me time telling you that these are not true holographic products.

Normally I would divide these up into three different posts, but I find myself short on time these days.

All e.l.f. products are cruelty-free and vegan.

These products are part of a haul I ordered at the beginning of November. 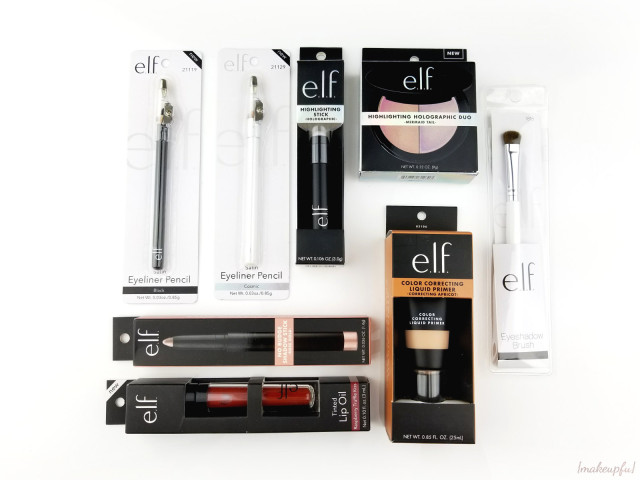 e.l.f. haul, including the Prismatic collection

I bought the shade Mermaid Tail because I wanted to try something very different from the normal highlighters I wear. I have warm undertones so I typically stay clear of purples and baby pinks. I initially planned to try the warm Siren’s Call, but thought it prudent to only buy one shade. They are $8 a pop.

The packaging is the standard matte black compact that e.l.f. has been using often as of late for their powders and highlighters. The e.l.f. logo is holographic foil, though it isn’t particularly strong. Works well enough for the price.

The Highlighting Duo come in three shades. The pink and lilac in Mermaid Tail, while not quite as light as the above photos, are significantly lighter in person than how e.l.f. depicts them online. I was extremely surprised when I opened the duo, expecting a lot more pigmentation. The pink has a color shift of a darker pinkish color, while the purple has a bluish shift.

Not gonna lie. I was not pleased with this highlighter when I first received it. I knew it wouldn’t be a true holo product, but I did expect more pigmentation and generally something more unicorn-y. That’s not what this is. There’s already a lot of interesting pink, purple, blue, and green highlighters on the market, even vegan ones. I feel like e.l.f. could have given us something really crazy, but they played it safe. Even just putting some green color shift in the pink shade of Mermaid Tail could have been a step in the right direction.

This is a very subtle product. I don’t think I can emphasize that point enough. The first time I applied the highlighter I could barely see it. You know how bloggers love to talk about highlighters having that lit-from-within glow? That’s not really here. I, who likes to stick mostly to neutrals, can wear either shade on a daily basis and not feel uncomfortable.

The highlighter is buildable. I like using the e.l.f. contour brush because its stiff bristles can pick up a lot of product in one go. Do be warned, however, that you begin to see mica flakes the more product you layer on.

I know I sound like a Debbie Downer, but I want to manage expectations. There’s also the possibility that these shades don’t show up that well on lighter skin. After the initial disappointment, I’ve come to like the Highlighting Duo and think I’ll purchase Siren’s Call in the future. It’s just not what I thought I was buying.

So far there’s just the one shade, but I kinda feel like e.l.f. will expand the line at some point. The Highlighting Stick is an okay product. It’s not super amazing, but it’s also not terrible.

The Highlighting Stick is packaged in the tube as e.l.f.’s other highlighting and concealer sticks. The main difference is the holographic foil e.l.f. logo. It hasn’t happened yet with this product, but the lids on my other e.l.f. sticks like to crack.

Cosmic is a light violet-blue shade. It is more purple than the lilac in Mermaid Tail.

This product is much more noticeable once applied to the skin than the Highlighting Duos, but I noticed that it’s very easy to completely blend the product away. To keep that sheen, blend it just barely into the skin. Enough to get rid of the harsh line, but not any further.

This is basically the same product as the Highlighting Stick, just in a smaller form.

I have tried this product a few ways. I tried it alone on bare eyes and didn’t really like that. Just looked kind of weird. I think the eyeliner looks much better on the waterline.

Another way I tried the eyeliner was over a darker eyeliner, specifically the e.l.f. Intense Ink Eyeliner. I do not like it when makeup products transfer to other makeup items. Fortunately, there was minimal transfer from the Intense Ink Eyeliner to the Eyeliner Pencil. While it looks more blue than duochrome applied this way, the Eyeliner Pencil does work well when used over a dark eyeliner.

The Prismatic Eyeliner Pencil uses the same packaging as the other e.l.f. eyeliner pencils. The white coating does have a nice pink and green color shift. Also, the e.l.f. logo uses holographic foil.

The lid has an attached pencil sharpener. It’s handy to have a sharpener on the lid, but the plastic tends to crack fairly easily.

At this time, one shade is available. It’s a bluish violet, just like the Highlighting Stick.

If you want to try out one of the Prismatic Collection products, I recommend the eyeliner pencil. You can still use it as a highlighter, as well as an eyeliner/shadow. It’s also only a dollar.

These Prismatic swatches really don’t like to photograph. I tried different backgrounds and different lighting. I couldn’t get the duochrome to show up in the photos no matter what I did. These were the best I could do.

Adequate swatches. For reference, my arm is not that dark.

Worse swatches. These are lighter than in person, though my arm looks closer to my skintone.

Overall, the Prismatic Collection is an average offering of products. There could have been some real standout products here, but e.l.f. did not deliver.