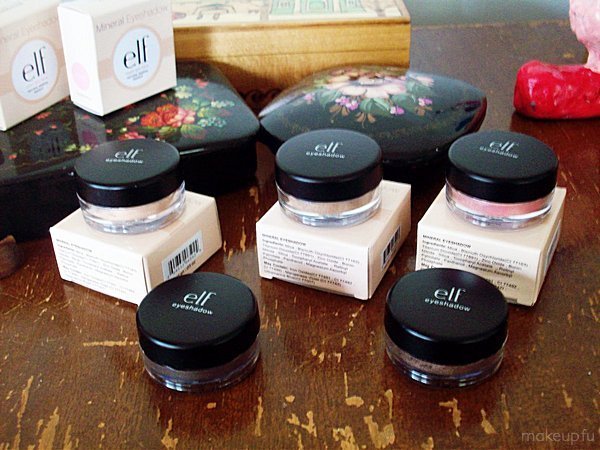 Update: Unfortunately, the Mineral Eyeshadows have been discontinued along with the Mineral line.

Back in April, I bought five Mineral Eyeshadows from the e.l.f. mineral line: Elegant, Celebrity, Sweet, Confident, and Socialite. Each comes in a plastic transparent sifter jar with a black lid and holds .03 oz.

For those of you unfamiliar, the e.l.f. mineral line is supposed to be a knock-off version of the higher priced equivalents on the market. By and large, they do a good job making an economical, (mostly) vegan alternative to companies like bareMinerals. The costs vary from $3 USD for eyeshadows to $8 USD for the Mineral Glow products. On the mineral foundation level, I feel that e.l.f. completely misses the mark by only offering a scant five colour choices. Then again, I haven’t tried the e.l.f. mineral foundation.