I picked up a couple of Urban Decay Lip Junkie Glosses back on April 1st as part of Ulta’s Twenty-Something Days of Beauty thingy. Each UD gloss for only ten bucks! Normally, they’re around $20 USD.

As the day of the sale drew near, I waffled as to whether I would even go. Beauty trips can be a pain to finagle when you have a husband and two young boys. Mind you, this was after I had poured through tons of online swatches and user reviews. I think I was probably getting cold feet over buying $20-$30 worth of lip gloss.

On the day of the sale, I discovered via the website that Ulta was limiting customers to only two glosses each. I hadn’t seen this tidbit mentioned anywhere in the print ads.

In the end, I obviously went to my friendly, local Ulta and picked up two glosses: Wallflower and Runaway. I had wanted to get Naked, that was out of stock online. Because of this, it was what had precipitated my desire to go to the physical store rather than purchase the glosses online. Naked was also out of stock locally, but turned out not to be vegan anyway. I’ve only looked at the Urban Decay display in Ulta a couple of times and hadn’t noticed that purple paw print used on the website to denote UD vegan products also appears on the signs below each product. That’s nice. Now I don’t have to carry a list on my iPod anymore.

When I arrived at Ulta, I was surprised to see that there was not a single sign indicating the $10 “Beauty Steal” (that’s really not a good sales slogan for a beauty product). I even tracked down an employee to verify the UD glosses were on sale. She grabbed a sales ad to confirm it. o(@=@)o I grabbed the two glosses I wanted, considered grabbing a third, then dashed to the cash register (hubby + boys were waiting in the car). One of the glosses rang up at full price, prompting the employees to consult the ad and each other to see if only certain shades were included in the sale. Once the cashier had manually adjusted the price to reflect the sales ad, I realized that I could have grabbed a third gloss and no one would have been the wiser. Oh well.

The Urban Decay Lip Junkie Glosses have a nicely constructed plastic tube that are fairly large. They have the usual solid plastic, wedge applicator. 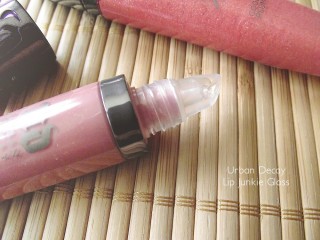 The applicator for Wallflower was erroneously double drilled, so the gloss was kind of hard to push out in the beginning. I didn’t think it was a big deal and haven’t felt a need to return it. 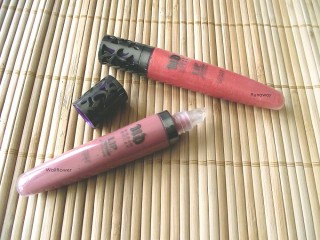 My one complaint is in regards to the lid. It looks nifty, but feels surprisingly plastic-y and cheap. A light squeeze results in audible squeaking as the lid and the silvery overlay push apart.

I find the Urban Decay Lip Junkie Glosses to be a good product, though I would hesitate to drop $20 on a single tube. The glosses remind me of the e.l.f. Super Glossy Lip Shines, in shape…and also the yucky scent/flavour. Given how many complaints I’ve seen lodged at the Super Glossy Lip Shines, I’m surprised that Urban Decay would use a similar berry scent. Maybe I need to look harder, but I haven’t seen that many comments about the icky taste. 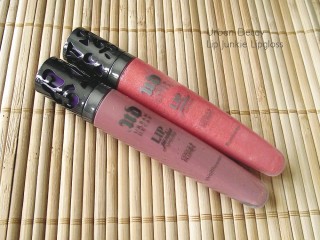 Do you know how much effort I put into making the shade name look like it’s printed onto the tube?
If only I had used the correct font, it would have been so much more convincing…

Like the e.l.f. Plumping Lip Glazes, the UD Lip Junkie Glosses don’t really work as promised. I do like the mint flavour and resulting tingle, but that’s the extent of the effect. If you’re interested in a plumping product, I suggest you look elsewhere.

On to the individual shades. I found the selection to be limiting and somewhat redundant. For those interested, almost all are vegan, with the exception of two or three. 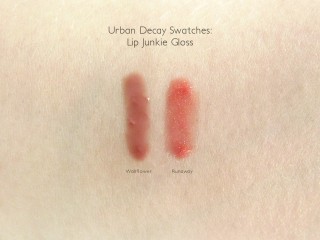 A very nice, sheer neutral shade. Reminds me of e.l.f.’s Super Glossy Lip Shine in Malt Shake, albeit with a slightly bluer undertone.

Wallflower does not contain glitter and the colour is neutral enough to be used more as a lip enhancer. It doesn’t have a lot of colour payoff. Of the two shades I bought, I wear this one less.

From what I can tell, this shade is sort of like a peachy/coral version of Naked. Unlike Wallflower, Runaway is chock full of shimmer. Though it has a lot of colour in the tube, all of the Lip Junkie Glosses are intended to apply sheer to the mouth. Runaway is definitely a warm shade, so those with cool undertones probably need a different colour.

I’ve been wearing this shade several times a week.

I do like the Urban Decay Lip Junkie Glosses and am very happy I dragged my family along to pick them up during the sale.

However, I find it hard to spend that much on a gloss product when there are plenty of other viable glosses out there. If I had a choice, I would at least stick with the Urban Decay Ultraglide Glosses, since the scent isn’t as overwhelming and the colour payoff is better.