I’ve had my eye on Ophelia’s Apothecary on Etsy for some time, particularly the lip tints.

I took advantage of their Christmas in July 20% off promotion, purchasing two lip tints, a Soap on the Go and a set of Summer Bronzing Solid Perfume Crayons. I also received a Fig soap end slice as a sample with my order. I haven’t tried it yet, but it smells nice. I ended up paying a little over $30 USD for the whole kit and caboodle. Though the turn around time was stated somewhere around a week when I ordered, it took nearly a month to receive my purchase. To remedy the situation, I was offered a shipping discount promo on a future order. 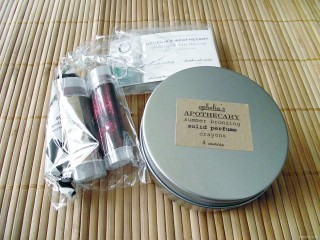 My first order from Ophelia’s Apothecary

Despite the lengthy processing time, I am very pleased with my order. Overall the products are high quality, though I have a few gripes with the lip tints packaging.

As some of you may have noticed, I have a real thing for lip tints. Because I have dry lips, I am always on the lookout for balms, and in particular, tints. I like to have some colour on my lips to avoid looking washed out. I really wanted to get the tube glosses, but wanted to try the lip tints first.

All lip products from Ophelia’s Apothecary come standard in an oval tube. It’s stated that this is to prevent the annoying rolling off your nightstand. (^_^) That may be, but I discovered that they are trickier to apply than those in traditional round tubes. I turn the tube so it’s vertically narrow and apply that way. I kinda prefer the traditional round tubes better. I’m impressed that each lip balm arrived sealed in shrink wrap. The plastic has two rows of perforation down the side for easy removal.

Each lip tint has a Victorian inspired label with the company info and ingredients listing. The font on one of the lip tints was teeny tiny and difficult to read. The paper used for the label isn’t suited for regular handling and is easily nicked, leaving white spots behind. Just from basic handling, I have tons of tiny nicks on the label. None of the other lip products I’ve purchased through Etsy have this problem. Also, the label for Black Cherry is really dark, making it difficult to read. 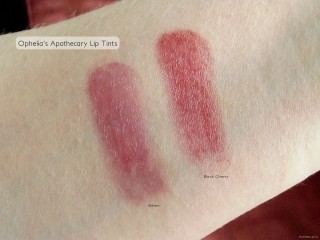 A newer lip tint from Ophelia’s Apothecary. I just loved this colour when I saw it. It looks about the same shade in person as depicted in the website photos.

It is a lovely cherry colour with a subtle hint of shimmer. Nothing too outrageous.

Unlike a lot of other lip tints, this has a lot of colour payoff. It behaves more like a sheer, moisturizing lipstick. On my fair skin, Black Cherry is fairly dark, though not enough to make me look vampy. Just a tad darker than I wear on a normal basis. It is probably a perfect shade for those with medium skin tones.

There’s not a strong flavour here. Just a bit of sweetener.

From the pictures, Bitten looks like an earthy, brick red shade. It is not. This is a berry shade nearly the same colour as Black Cherry. Don’t get me wrong. This is a lovely colour; I just have a difficult time pulling off colours with cool undertones. Normally I wear warm neutrals and coral pinks, but when I’ve paired Bitten with green shadows and pink cheeks, it works well.

Bitten is a pure sheer shade with zero shimmer. It doesn’t have the same level of colour payoff as Black Cherry, but almost.

The best thing about Bitten is the mint flavouring. It has the absolute perfect minty taste. I just love it. I wear it more than I would normally just for the minty flavour.

I was really intrigued by this little set. I love the concept of solid perfume–though I’ve never bought any before–and I like the idea of it simultaneously being a bronzer. 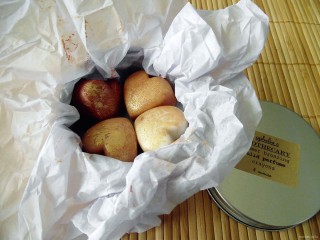 The four solid perfume hearts each have a different scent: Love, Banilla Buttercream Frosting, Creamsicle, and Bergamot & Violet. They arrived wrapped in tissue paper, housed inside an aluminum tin with a screw on lid. There is a paper ingredient listing located on the bottom. 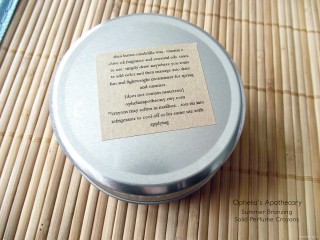 Though the solid perfume hearts are listed with four different scents, I don’t smell much difference between them. I’m not sure if this is because the scents mingled during shipping or because they are similarly scented. It doesn’t really matter to me; they all smell good. It’s a nostalgic scent, a memory from my childhood that I just can’t put my finger on. 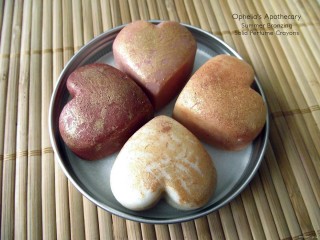 I was worried that the solid perfume hearts would be on the small size, but they are generously portioned. They arrived in the middle of August but were not melted. They are kinda soft and squishy when I pick them up and rub ’em against my skin. I suppose I could refrigerate them, but I’m not too concerned.

Here’s one of the Ophelia’s Apothecary Summer Bronzing Solid Perfume Crayons
in my hand as a size reference.

I’m very fair, but there’s not a whole lot of colour payoff on the bronzing side, mostly from the dark pink one, but they still work well as a subtle fragrance. There’s also some shimmer.

Soap on the Go in Bamboo Sugarcane:

One thing that bugs me when I’m out and about is having to use non-vegan, mainstream soap in public restrooms. I don’t want to use Dial or whatever. A while back, someone on Etsy sold this jar of tiny cut up soap squares (I’m thinking it was Epically Epic). I’ve (figuratively) kicked myself for missing that opportunity. 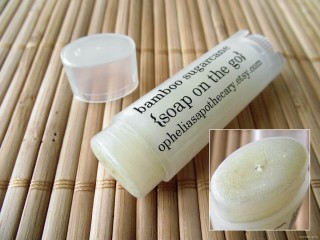 Ophelia’s Apothecary Soap on the Go in Bamboo Sugarcane

While surfing on Ophelia’s Apothecary during the sale, I noticed these Soap on the Go listings. It’s a little bit of soap poured into an oval lip balm tube. This label is clear plastic and is much clearer than those on the lip tints.

I decided to go with Bamboo Sugarcane instead of one a more floral scent. It’s a plainer scent than I expected. There is, however, lots of green shimmer in the soap.

I expected to use the soap by rubbing it across wet hands, but the directions say to slice the soap, then use it.

By slice it, I assume that means to push up a bit of soap up and use the lid to cut it. At least, that’s what I tried while I was out and about. The bottom of the lip balm packaging was really difficult to twist the first time. I don’t think soap is meant to be poured into lip balm containers. Once I got the soap out far enough, I took the cap and tried evenly slicing off a piece. The soap was really hard and I probably didn’t have it out far enough. I sorta managed to shave off some bits, but didn’t get a true slice.

Overall, I’m very pleased with my order, even though Ophelia’s Apothecary is on the pricier side of Etsy cosmetics. My main gripe is that Bitten was completely different from the website photos (and I own an LCD monitor reputed for its colour accuracy). I also think the lip tint labels are problematic. It’s great they’re going full speed with the Victorian feel, but readability and durability should take priority.

The shipping delays appears to be an ongoing issue. I don’t mind that it took as long as it did. I’ve read on other sites about shipping delays in the past so was prepared. However, better communication early on would likely alleviate some customer complaints.

Despite these complaints, I would still recommend the company. I can’t wait to try other products that Ophelia’s Apothecary offers, like their face and skin products.