I randomly came across You Stink Soap on Etsy last year and instantly loved the name. Fortunately, the company appears to be vegan centered so I only needed a reason to place an order.

That reason came after Thanksgiving in the form of a 15% off sale. The final total for the order was under $20 USD, not including the hefty shipping charges for all those heavy body products. 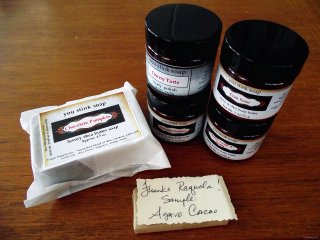 My order arrived quickly and without incident. Even with the holiday season in full swing, my order was shipped three days after receipt, as stated in the turn around statement by You Stink Soap, and arrived via Priority Mail in three days. The products I ordered were well packed in bubble wrap within a large envelope. I also received a soap sample as an extra.

I think this soap was the reason I first discovered You Stink Soap. In October I searched for a cold processed pumpkin soap and was immediately drawn to this one due to the addition of chocolate. I love pumpkin. I love chocolate. It’s a no brainer. 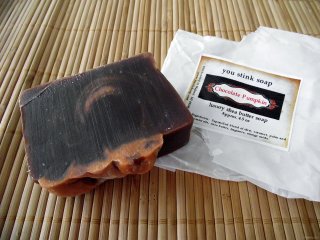 You Stink Soaps have a very generous cut, larger than those of DressGreen, to use a comparison. A cut of Chocolate Pumpkin is 4.5 oz and sells for $5.50 USD. The soap was packaged in a glassine envelope with a professional label. The soap cut I received wasn’t as cutely swirled as the product photo, but that’s a very minor complaint.

I really hoped for a sugary scented soap due to the pumpkin and chocolate combination. There’s a great Chumpkin cupcake that’s sold at my local vegan bakery Fair Grounds in Iowa City that I love. In my head that’s the scent I wanted.

The soap doesn’t smell anything like that, though it’s still pleasant. I personally don’t think it smells much like pumpkin and chocolate. At least it’s not how I imagine the combination smelling. I don’t notice a pronounced pumpkin scent and the chocolate is more dark bittersweet.

I have not used this soap yet so I can’t comment yet on performance. I sorta stocked up on cold processed soap during the holiday season while buying for others. Yep.

After a ton of waffling, I finally decided on Cherry Tarte. There are so many choices at You Stink Soap that it was difficult for me to make a decision. But I really love body scrubs so I knew I had to try at least one. 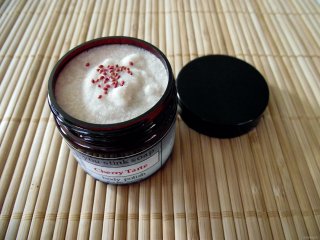 I went with a 3 oz travel size jar for $4.25 USD. The jars are shiny amber with hard shiny black lids.

The You Stink Soap body polishes are sugar based scrubs. The Cherry Tarte Body Polish I received was far more beige than the light pink shown in the product photo. I thought the sprinkling of cranberry seeds on top was a cute touch.

This smells divine. Normally I don’t go for the sugary scents in lotions (pumpkin excluded), but I make exceptions for scrubs and shower gels. It is close to how cherries really smell, not the cloying artificial junk I can’t stand.

The scrub works as advertised, but I was surprised, and not in a good way, by the waxy consistency. That was unexpected from a scrub product. The body polish is very stiff and doesn’t have the usual sugar scrub consistency. Due to this, I would recommend trying a travel size jar to see if you like it before plonking down eleven bucks for a full size version. In contrast, DressGreen also has a sugar scrub that likewise contains emulsifying wax, yet lacks a waxy consistency.

I knew I wanted to get the corresponding Pumpkin Chocolate Body Butter, but I ended up with two additional fragrances. I knew I didn’t need three body butters so I gave one away.

The travel sized jars hold 2 oz of product and are the same as those used for the body polishes. The body butters also sell for $4.25.

The consistency of this product is very thick, which is good in a body butter, but also very waxy, which is not so good.

Like the soap, the scent wasn’t what I expected. I hoped for a more traditional spiced pumpkin scent and didn’t get it. The Pumpkin Chocolate scent is nice, just not what I wanted. In retrospect, I should have purchased this scent as a body polish. I kept this body butter out of principle because I really wanted a pumpkin lotion.

I ended up preferring this scent over the Chocolate Pumpkin and chose to keep it for myself instead of gifting. The combination fruity citrus scent is light and refreshing.

I really like this scent as well, but instead gave it to my niece as a Christmas present. I paired it with Vanilla Cocoa and Patchouli Orange soap samples from barebare, along with a crocheted soap cozy I made, so it worked out well.

This scent is more sweet and sugary than the other two body butters I ordered, but I think I still prefer it over the Chocolate Pumpkin scent.

I have not used this sample yet, but it does smell very good. The simple name belies the complex scent. I can’t describe it well, so here’s the description taken from the product info on Etsy:

You Stink Soap has a lot of good products that are reasonably priced. There are also many unique scent combination offered by this company. My order was handled quickly and professionally. I didn’t have any questions or concerns with my orders so I can’t comment on that aspect of customer service. Labels, typically my biggest gripe on independent businesses, are professional, easy to read, and contain all the legally required info.

I do like the Chocolate Pumpkin soap, despite my complaints. I was very tempted to buy additional soaps with this order and had to restrain myself. In the future I do intend to purchase more You Stink Soaps. I have my eye on Cherry Tarte, Belgium Chocolate and Tea for Two.

Unfortunately, the body polish and body butters are too waxy for my liking. I don’t intend to purchase any more body butters, but I am open to trying additional body polishes.