I was at Coral Ridge Mall (Iowa City area) with the kids and hubby when I decided I should torture myself by checking on the e.l f. Holiday collection. After deciding for the umpteenth time against the 32 Piece Neutral Palette, I went to find the rest of my family. (I was so not telling them what I was up to).

We had just reconvened near the women’s loungewear section when I noticed large cardboard Christmas tree displays, proffering stocking stuffers. I was eying the rolled bundles of thong underwear, wondering how many women would like to find such a thing in their stocking on Christmas Eve, when I belatedly realized there was a ton of loose e.l.f. nail polishes in the adjacent compartment. (So I guess the ladies want thongs and nail polish for Christmas?). 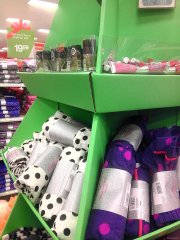 There are a bunch of colors. I think each compartment held two shades apiece. Of course I had to investigate all of the displays. Most of the shades I recognized, but I wasn’t sure about all of them. I picked up a pewter glitter/metallic shade called Futuristic. At first I thought it was Metal Madness–and was uber excited–but Futuristic is a straight silver color, not the dark charcoal of Metal Madness.

I’m trying my best to remember the shades. I know there was Copper, Mint Cream and Futuristic. I believe Party Peach was the orange shade paired with Copper. The other compartment had a red and a green/teal shade (Teal Blue, I believe). There was also a gold glitter (Gold Star or Golden Goddess) and a purple shade.

I also found a smaller offering of Super Glossy Lip Shines. There was Sweet Tart, a bright pink, a sparkly red, and a bright peach that I believe is Party Peach. What stood out to me the most (besides the $1.99 price tag for a $1 product) was the silver lids. I believe some years before they streamlined the product lines, e.l f. used to sell SGLS holiday sets with silver lids. Don’t think it justifies the 200% price increase, though. 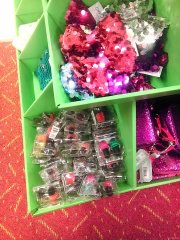 A subsequent visit to a local Target revealed more items in the girls section, where I found Mini Nail Polish Duos along with the Super Glossy Lip Shines. There were three different sets that I found of the nail polish duos. The only additional SGLS shade was Angel, sans SPF 15. 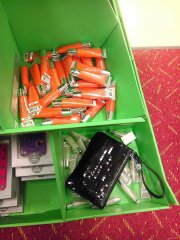 I’ll mention here that I took the time to note the colors I saw on the second trip, but apparently didn’t save the note. (=_=;)

These items are not sold online at either Target.com or at e.l.f., so you’ll need to go to the women’s loungewear and girls sections at Target stores.

A lovely silver close to a pewter shade. It looks metallic, but it’s a micro-glitter. Covers well in two coats. Could have saved myself a dollar since I found an identical version by L.A. Colors later at Dollar General. 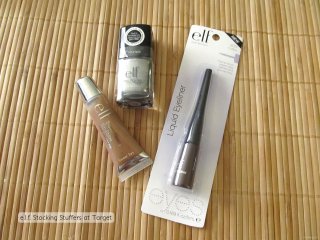 It looks like this might be the same as the new shade Liquid Metal, renamed for the holiday collection.

This is very pretty. I recommend Futuristic if you’re a fan of metallic.

You can find these mini nail duos in the girls section at Target. 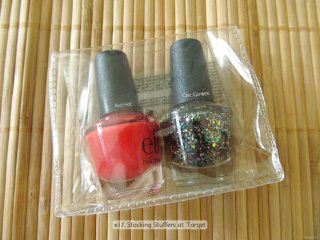 These cute mini versions are reminiscent of OPI bottles, and seem to be identical to those found in the 15 Piece Nail Polish Collection Target carries (also found online at the e.l.f. site and possibly available at Sears as well). 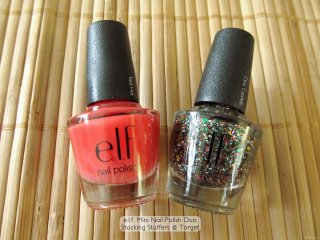 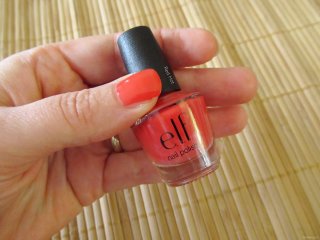 This is a nice, candy apple sort of red. It covers surprisingly well. 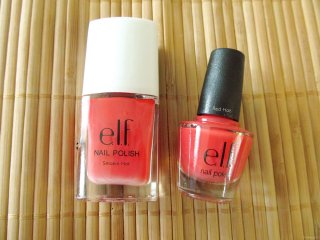 I’m pretty sure Red Hot is exactly the same as Smokin Hot. It even accumulates that layer of white at the bottom of the jar.

A nice multi-color/shaped glitter polish. While it looks like the glitter is suspended in a translucent black, it’s clear as far as I can tell.

I like e.l.f’s move towards these mini-sized nail polishes. I don’t paint my nails enough to justify a full size container. The set is good for oneself or as a stocking stuffer (and not just for girls!)

This is a peachy nude with fire glitter. Unfortunately, the glitter is the only interesting thing about this lip gloss. It applies on the sheer side. 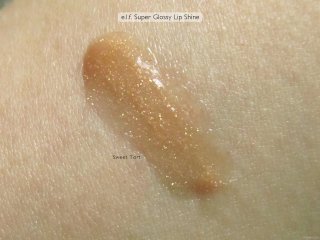 As mentioned earlier, the SGLS stands apart from its regular counterparts by having a silver lid. Like all other holiday/LE versions it does not contain SPF.

Only pick up Sweet Tart if you’re a collector.