I stopped in to my local Dollar General to grab a few things–and of course, check for e.l.f. products.

No dice. But I did find some new Wet n Wild products.

I love the Megalast Nail Polish by Wet n Wild. Call me crazy, but I’m dead serious when I say it’s my favorite line of polish–China Glaze would be second. There is something about the dusky, creme shades and idiot-proof formula that makes me adore it. The wide brush also really helps me apply the polish.

I’ve seen this line at drug stores and Kmart, but never taking up more than two shelves in stores. I was very surprised to see five or six shelves at Dollar General. There were so many shades I had never seen before, not to mention shimmer and glitter finishes. Most of these shades aren’t even on the Wet n Wild website. When I mentioned this to my husband, he said that Wet n Wild probably has a deal with Dollar General to provide exclusive shades.

And that seems to be exactly what happened. I dug around teh interwebz and found an article on Nouveau Cheap about Wet n Wild adding over forty (!) new colors to the Megalast nail collection. It has been confirmed that these are Dollar General exclusives. That post also has photos of ever Megalast nail polish shade.

I noticed what I think are a few dupes for polishes from their other lines. One I recognized for sure is last year’s Fantasy Makers Once Upon a Time that I own, which is also Make Them Boys Go Loco in the Fergie nail collection. It goes by On The 101 in the Megalast collection.

Since I’m trying super hard not to buy nail polish–and failing miserably–I picked up two green shades. There was a tempting mint that I think was called Retro Mint, and is greener than I Need a Refresh-mint, but it had a shimmer finish and I wanted a creme. You can find swatches of Retro Mint and I Need a Refresh-mint at Rambles of a Polish Addict. 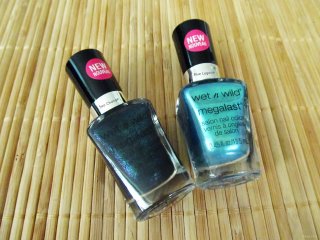 Aptly named. I’ve been really intrigued by duochromes and have so far picked up three or four of these green/blue duos. They’re never really duochrome when I apply them to my nails, though. I tried this shade, hoping for better luck.

While I’ve layered Blue Lagoon both on itself and over black, I don’t see as much of a duochrome effect as I would like. Bummer.

I compared it to my Wet n Wild Wild Shine Caribbean Frost and even side by side found them to be nearly identical. Caribbean Frost is ever so slightly more green, but it’s not noticeable once applied. 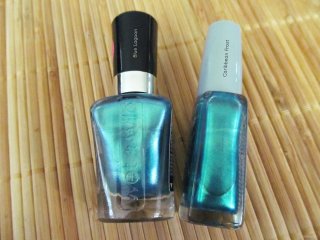 I could not find any swatches online, but it’s seriously almost the same as Caribbean Frost. You can just look at pictures of that and you’ve basically got Blue Lagoon.

If you already have Caribbean Frost, you won’t need this one. If you don’t have either and are in the market for a shimmery green/blue polish, I would recommend Blue Lagoon for the formula, wide brush and packaging.

This next shade is intriguing.

It looks black in the packaging, but contains tons of emerald/amethyst duochrome flecks, though it’s predominantly emerald. While you can see some amethyst when you turn the bottle in the light, I can’t see any when applied to my nails.

It’s not a shade I would wear often, but I really like it. I find unusual polish shades intriguing.

You can find swatches at BreezyTheNailPolishLover.

I cannot recommend the Wet n Wild Megalast Nail Polish enough. At $1.99, these guys are a steal.

If you have a General Dollar store near you, definitely stop by and pick up some Megalast polishes.