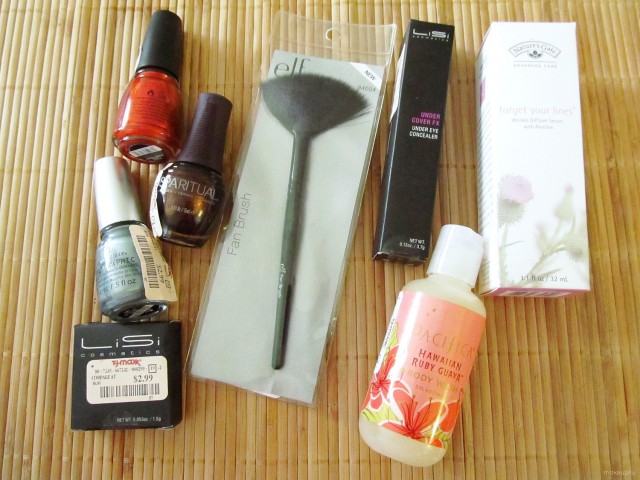 Still looking for butter LONDON nail polishes and still not finding them.

I ventured over T.J.Maxx this past Sunday. While I didn’t find any butter LONDON nail products, I did find a bunch of other polish. There were a couple of O.P.I. crackle kits–I don’t do crackle nails, so skipped that–some SPAritual, China Glaze, Calvin Klein, and other odds and ends.

The first polish I spotted was a China Glaze holographic polish in Don’t Be a Luna-tic and immediately grabbed it. It’s not my first pick if given a choice, but I’ve wanted to try a holographic polish and it was $2.99. I grabbed another China Glaze polish in Xtreme Thrash, a red (also $2.99), and a SPAritual polish in Native Soil for $3.99. I’ve never heard of this brand, but I was intrigued by the bold vegan text on the label.

Following a reader’s tip, I found some LiSi Cosmetics scattered among the e.l.f. remnants. There wasn’t much: a couple foundations, concealers and cream eyeshadows. I bought a Silky Eyes Cream Eye Shadow in Clay and an Under Cover FX Under Eyes Concealer in 01.

I spotted an intriguing collection of too faced glitter eyeliner for $5.99, if I recall correctly. After some Google-fu, I think found the too faced Starry Eyed Liquid Liner. I almost got it, but didn’t want to go searching online to see if it was vegan, and I’m also pretty sure I’m not going to wear light blue, glitter eyeliner any time soon. I doubt that many moms in their mid-thirties often wear such things. Not that we never do. More like, we don’t have many opportunities.

Rounding the cosmetics purchases was a mini bottle of Pacifica’s Hawaiian Ruby Guava Body Wash for $2.99 and a clearance e.l.f. Studio Fan Brush for $1. I’ve wanted the fan brush for awhile but never got around to buying it. But for a buck, I definitely couldn’t pass it up.

Not related to beauty, I got a weird flower vase thing (I have no idea what it is, but I like it) and a Japanese porcelain bowl with an adorable cat on it. I’m a huge fan of Japanese pottery and always on the lookout at T.J.Maxx after I found my holy grail sushi plates and bowls set there. I have an extensive dishware collection and these are my pride and joy. I’ve never found anything so epic since, but the possibility remains that I’ll find something equally awesome.

In the food section I found agave nectar going for $2.99/11.75 oz. Even “The Store That Shall Not Be Named” sells it for five or six dollars. There were small bottle of light agave and larger bottles of dark agave for $5.99.

I’m still in the middle of trying and photographing everything. Hopefully I can get some reviews out in the near future. I’ll do the reviews for each item type separately. I think that will make products easier to find on the blog.