Pros: Lipstick is great, the After Sun Shimmer Lotion is a good daily lotion, self tanner works well and smells good
Cons: Too many sun care products in light of an earlier box, new box packaging is flimsier than the original, no samples again

In many ways this was the most disappointing of the True Beauty Boxes (TBB), mostly due to a built up expectation that didn’t deliver. Also a contributing factor was the new packaging.

The main problem was the build up for an Organik extra. I received a teaser mailer alerting me to expect an extra goody from Organik–and that the box would be shipped the 25th of June. While the ship delay was mildly disappointing, the surprise sounded promising.

To quote the email:

With all the promoting, I did not expect the goody to be a 20% discount code to Organik. That doesn’t count as a goody in my book. Not to say it isn’t a nice gesture, because it is. I kind of feel like something fell through, given that the quote above implies two extras when we only received one.

I asked my husband, who was working as a manager for a fashion retail customer service center at the time, if a discount code counted as a goody. He said no.

To top it off, I didn’t even get the actual printed card. I received an email with the discount code telling me the cards ran out before they reached my box. 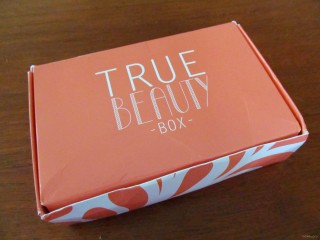 I must say I preferred the original white boxes, mostly because they are high quality and great to reuse. The new boxes, though nicely printed on all sides, are flimsier and easily damaged. My box was covered in dings from its trip from Washington to Iowa. Nor are they as easy to reuse.

Otherwise, the contents were packaged the same, wrapped in tissue paper and laid on a bed of crinkly paper filling, with the monthly description card on top.

Though the combined value for June’s Veganista TBB is a whopping $63 USD, double the monthly subscription rate, it felt like something was lacking. I think I would have had a more favorable response if the Organik hullabaloo hadn’t occurred.

No samples were included this month either. While I don’t need samples, the TBB site states several times that all boxes include samples, so it does become problematic when they aren’t there.

This month’s theme was all about summer, explaining the focus on sun care.

But the box wasn’t all disappointment, so let’s start with the best part.

I love, love, love lipstick (though I usually wear lip gloss/tints) and was super excited to find this lipstick by Lavera in my box. After one glance at the glaring orange sticker label, I was apprehensive.

However, what I found inside was the most perfect shade of peach. There is also a touch of shimmer, but it’s not really noticeable.

Swatch of Lavera Natural Lipstick in Peach Amber No. 2

The peach works wonderfully with my skin tone and gives me a MLBB look. It’s perfect for a natural/no makeup look.

The packaging is a sleek, shiny black tube, with the color sticker label on the bottom and a clear plastic window on the top.

I didn’t really get what this was at first–because it doesn’t have product info on the label–but it’s to be used after sun over-exposure (read sunburn) to restore nutrients to damaged skin. Strangely, there are little golden sparkles in it. The lotion has a loose, watery consistency and a lovely pale tangerine color. 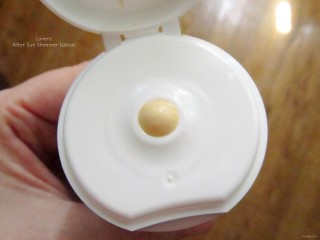 This photo doesn’t do the pale tangerine color justice

I had it for over a month before I tried it for its intended purpose. Before I just used it as after shower lotion. After a lengthy walk to the local farmer’s market and back, I discovered I had not applied enough sunscreen and decided to give the After Sun Shimmer Lotion a try. Nothing adverse happened when I applied it, but honestly I think aloe vera gel would have worked better. 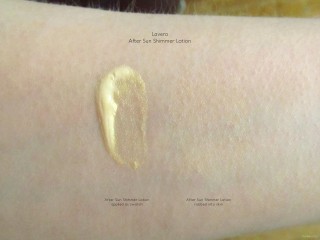 The shimmer is not visible in some lights and completely obvious in others. Natural light seems to bring out the shimmer more. The glitter is tiny and golden, but still quite noticeable in daylight sun.

I love the scent. Fragrance isn’t my strong area so I’m not sure how to describe it. Kind of subtle and grown up.

I’m kinda on the fence with this one. I don’t think it quite works for sun damaged skin–and I really wonder who thought it was a good idea to add shimmer to such a product. I don’t want any sort of glitter near my sunburned skin. On the other hand, this is a great lotion for daily use.

Even though I previously received a self tanner in April’s TBB, this self tanner is different, advertising itself as a “tropical tanner”, meaning it gives a dark tan for face and body. While it gives a noticeably darker tan than the other self tanners I own, I don’t think it’s all that dark by itself. Maybe I just have skin that resists the fake tanning substance.

While the packaging says the tan will be visible in 3-4 hours after application, I didn’t see anything until the next day, albeit this seems to be normal for me.

The consistency is on the watery side and prone to separation.

Aside from the extra goody fiasco and lack of samples, the products themselves are of excellent quality. I love the Lavera lipstick and definitely recommend it, especially to those with warm skin tones.

I think overall the box should have been more rounded out, and definitely could have used less sun related products in light of the April box.