The full name for this product is the Amazonian Clay BB Tinted Moisturizer Broad Spectrum SPF 20 Sunscreen. tarte has the most ridiculously long product names.

I hadn’t exactly planned to pick up this Amazonian Clay BB Tinted Moisturizer from *tarte Cosmetics during the Friends & Family Sale, but I had that weird situation where I was $0.10 under free shipping. I had wanted to try this BB Cream, so I figured I might as well get it when it was 30% off.

While I had been dying to try a vegan BB cream, I hesitated on this one by tarte despite the good reviews I had read because it’s a tinted moisturizer turned BB tinted moisturizer. Whatever that means. I went with Lavera Beauty Balm (reviewed here) because i wanted to try a product that was ostensibly a BB cream from the beginning.

So anyway. Tinted moisturizer turned BB cream. Friends & Family Sale. I purchased it because of the good reviews I read.

During checkout I was told to check my order, so I ran down the list. Call of the Wild Eyeshadow Palette. Beauty & the Box Brewed Awakening. Amazonian Clay BB Tinted Moisturizer in Agent 14….wait, what? I had somehow inadvertently clicked on the wrong shade. I wear Ivory, aka Agent 02, so that would have been bad.

* tarte is still a cruelty-free brand with many vegan options, but they have been acquired by Kosé, a Japanese company.

At 1.7 oz, there’s a lot of product here, about twice as much as you usually find in a BB cream. I don’t foresee myself repurchasing any time soon.

The squeeze tube has suede-like plastic with a cap covered in bamboo. One of my biggest pet peeves is when companies try to be eco-friendly but end up using more resources in the process. In this case, the cap is not bamboo, but plastic covered with bamboo. Sure the packaging looks cuter this way, but tarte would have been more eco-friendly by omitting the bamboo and just leaving the plastic cap. Or they could have used a recycled plastic lid. 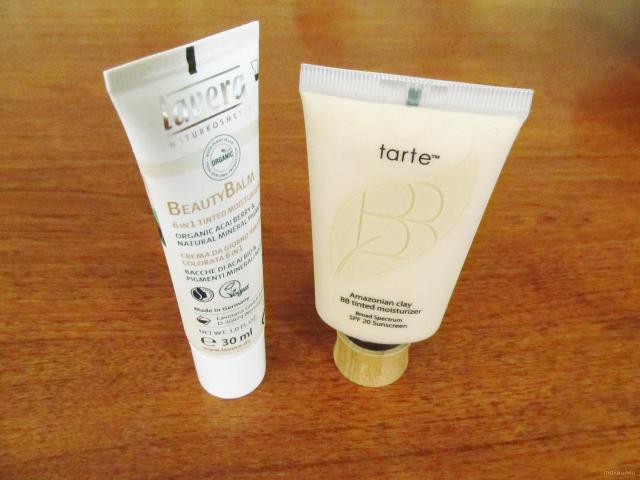 Anyway, the product is easy to dispense and I haven’t had any problems with this delivery system. I prefer pump dispensers, but tinted moisturizers are rarely packaged that way.

I’m not exactly sure what tarte means by BB tinted moisturizer. Sounds like a fancy way to say tinted moisturizer. I’ll let it slide because this is a good product and I don’t think there’s any American BB creams that are truly similar to their original Korean counterparts.

Though the tarte BB cream contains several types of dimethicone, I have not had any problems with it. Normally my face has a very bad, drying reaction to all types of “cones”. 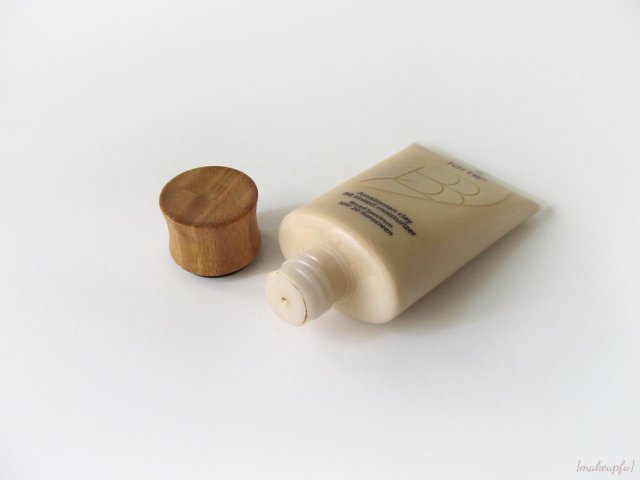 Like most tarte products I’ve seen, the much touted Amazonian clay (kaolin) is far down on the list of ingredients. I imagine the dimethicones contribute far more to the formulation than the kaolin. I’m not even sure why the company makes such a huge deal out of it. Kaolin is in tons of cosmetics already and I don’t think the Amazonian bit matters that much since the clay is processed. I’ve read why the Amazonian clay is so important on the tarte website, but it doesn’t sound scientific enough for me.

This BB cream has a creamy texture and provides light-weight coverage, just enough to enough out redness and minor imperfections in the skin (any one else thinking of Jurassic Park?). I still use concealer under my eyes and on any major blemishes I may have.

I find that I don’t need much product, just a little more than the Lavera Beauty Balm. So far I’ve only used my fingers to apply the BB cream, but I imagine you could use whatever applicator makes you happy, like a blender sponge or brush.

Of course, I still moisturize before applying because I have dry skin, but thankfully I haven’t found myself double moisturizing like I’ve mentioned in the past. I don’t use a setting powder due to my dry skin (normally you would use some sort of powder to set the BB cream). This is a hydrating product, much more than any other tinted moisturizer I’ve tried in the past, and most should be able to get away with not wearing a separate moisturizer underneath.

The Amazonian Clay BB Tinted Moisturizer would work best for those who have dry to normal skin. It might be a bit too much for those with oily skin.

Keep in mind that the BB cream only has a 20 SPF rating. If you’re going to be outdoors, you’ll need a secondary source of sunscreen.

Unlike the Lavera Beauty Balm that only comes in one shade, the tarte Amazonian BB Cream Tinted Moisturizer comes in eight shades with both cool and warm undertone options. I expected to be Fair (formerly Agent 00), the lightest shade, but the descriptions led me to Ivory (formerly Agent 02). Fair is for “fair skin with pink undertones” while Ivory is for “fair skin with pink and yellow undertones”.

Turns out Ivory is the exact shade I needed. While I will forever insist the Lavera Beauty Balm is too dark for my skin tone, this BB cream is perfect.

Since the product formulation is on the sheer side, I think the vast majority can find a shade that works with the eight available shades.

The Lavera Beauty Balm has medium coverage and is more concentrated, and that’s probably why it’s 75% less product than the Amazonian Clay BB Tinted Moisturizer. I would say the tarte BB cream has a dewy finish, though a setting powder probably mattes it to a satin finish.

At the end of the day, the tarte Amazonian Clay BB Tinted Moisturizer is little more than a tinted moisturizer. However, the creamy, light-weight formula makes a good product, especially for those seeking a sheer coverage base.

The only major problem I’ve had with this BB cream is the 20 SPF rating that could definitely be higher.