Throwback Thursday: NYX Tango with Bronzing Powder When Leopard Gets A Tan 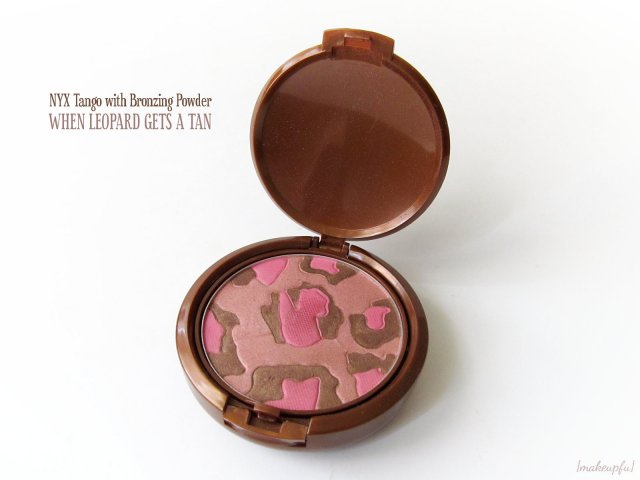 My apologies for not posting a Throwback Thursday last week. I was super ill and didn’t have anything to post that didn’t also take gobs of editing time or didn’t need swatches.

Today’s Throwback Thursday features the Tango with Bronzing Powder When Leopard Gets a Tan by NYX. This was released at a time when seemingly every makeup company worth their salt had a leopard themed blush/bronzer (except for e.l.f.; missed opportunity there). Up to that point all of the leopard bronzers I had looked at all contained animal ingredients, so I was super excited to discover that the version by NYX looked suitable for vegans. 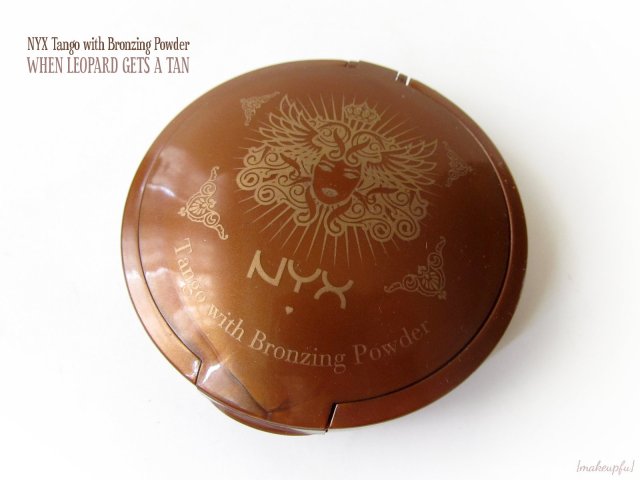 The Tango with Bronzing Powder compact.

I went to Ulta, waffled over the price and eventually left empty handed. When I ultimately made the decision to purchase the bronzer, I was horrified to discover that Ulta has changed its displays and all of the Tango with Bronzing Powders (TWBP) were removed.

While searching the clearance section, however, I stumbled onto the several of the TWBPs. There was another bronzer in the line that also looked okay, but I was in love with a leopard version and put it back.

This is an example of when procrastination pays off, considering I got the bronzer at $4.99 USD ($4.18 after a coupon). I don’t remember what the original price was, but I’m guessing somewhere around $10. In retrospect I think I should have grabbed both bronzers, at that price point. 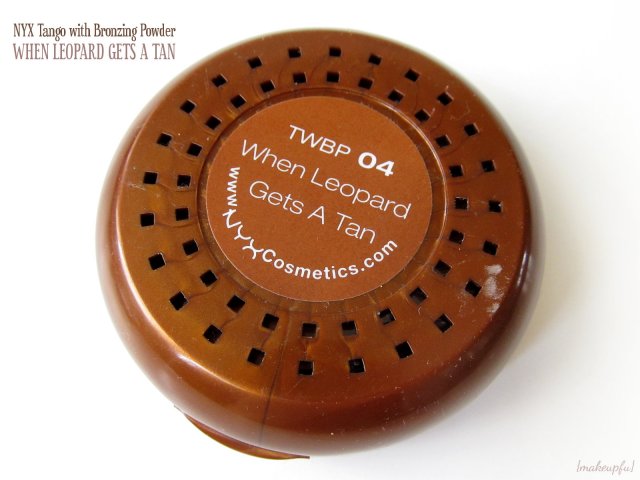 The bottom of the compact.

Afterwards, I got into my car and promptly realized that I bought the wrong bronzer and had to exchange it. Because I had used a coupon for the initial transaction, the return ended up being an ordeal, though it worked out in the end. So the lesson learned is to make sure you have the right item during checkout or it could end up being a complicated mess.

While the TWBPs no longer are available in stores, it turns out you can still buy them from NYX directly.

TWBP When Leopard Gets a Tan

There are three main colors in the bronzer: a shimmery/metallic bronze, a matte hot pink, and a shimmery peach. The finishes don’t matter, since they merge to become a super shimmer. It’s not glittery; there’s just a lot of shimmer.

I think I realized in the back of my mind at the time I bought the TWBP that the bronzer isn’t super compatible with my skin tone. While the peach shade works for me, the hot pink is too cool and the bronze is way too dark. This is definitely a bronzer that is more suited for those with medium and darker skin tones. I do pull it out occasionally and try to (lightly) use it. 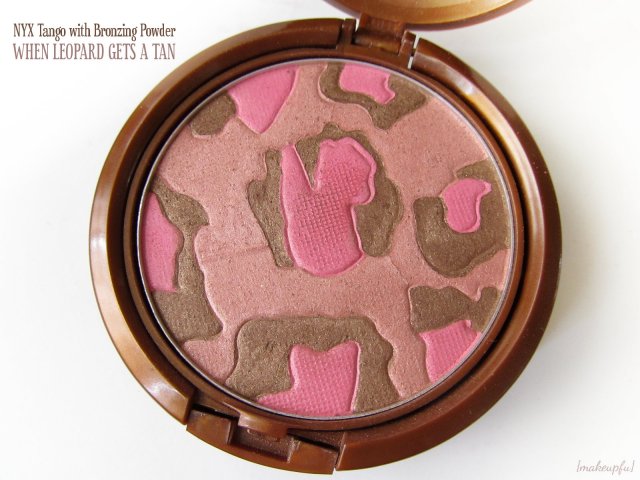 Closeup of TWBP When Leopard Gets a Tan. Here you can see how the bronze shade deposits itself over the hot pink shade.

You have to use all three shades swirled together because the colors are too close to use individually. I had to redo some of the swatches because they kept bleeding into each other.

The bronze shade has a habit of coating its hot pink neighbor. It’s almost like a scab of brown forms on top of the pink. I have to scrape the layer off the hot pink to get any color. Even then the bronze shade will just re-coat it after a swipe of the makeup brush. 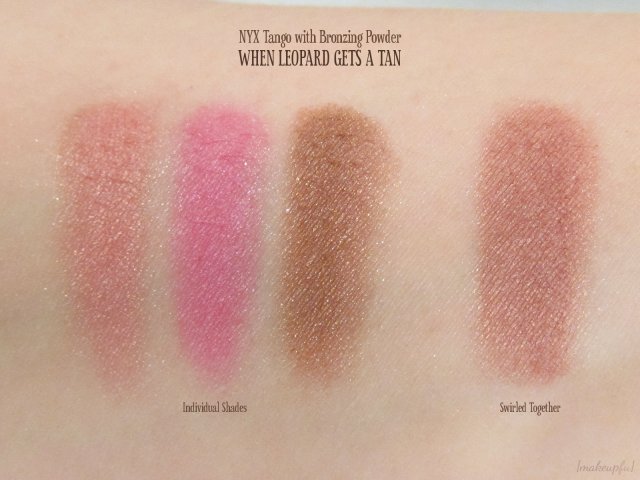 Swatches for When Leopard Gets a Tan

When blended together, they form an admittedly pretty—and unexpected—mauve/dusty rose shade. I’ve attempted to use the bronzer as both a bronzer and a blush, but neither seen to work for me. Most of the time it either kind of looks like dirt on my face or it comes off as way too dark. I think it goes back to the bronze shade coating the hot pink so the brush doesn’t pick up the pink and the peach can’t compensate. The bronzer ends up looking more like an unflattering, dark brown on me than pink. It doesn’t help that I have a lot of difficulty pulling off brown blushes. It’s a bummer.

It would have been nice for NYX to create a range of products featuring the leopard print design. Maybe four or five options to cover all skin tones.

I can’t find the box, so instead here are the ingredients posted on the NYX website:

The dark bronze, plastic compact is itself is a dual-layer affair with the pan layer lifting to reveal the brush compartment beneath. At first glance there doesn’t seem to be a mirror, but it is on the underside of the pan layer.

Bottom layer of the Tango with Bronzing Powder

One thing I did not realize when I made my purchase was that the bronzer comes with a brush that appears to have natural fibers.

I hope you have enjoyed this week’s installment of Throwback Thursday!

Have you had the same problems I did with the TWBPs or did you love it? Let me know in the comments below.