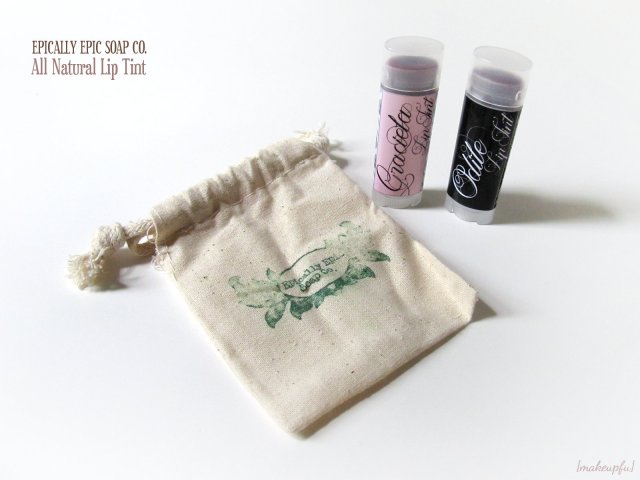 I was super excited to learn that Epically Epic Soap Co. had introduced a new line of lip tints with all-natural colorants. So far there are five shades, of which I purchased two. All shades are vegan.

Epically Epic Lip Co. tints are usually $3.75 USD, but the natural lip tints are $5 USD each.

Unlike all of the other lip balm/tints by Epically Epic, the natural lip tints are packaged in oval tubes. I’m on the fence with these tubes. I prefer the normal rounds tubes because I think they’re easier to apply, but over the years I’ve gotten used to the ovals.

All of the Epically Epic lip products are 0.15 oz. 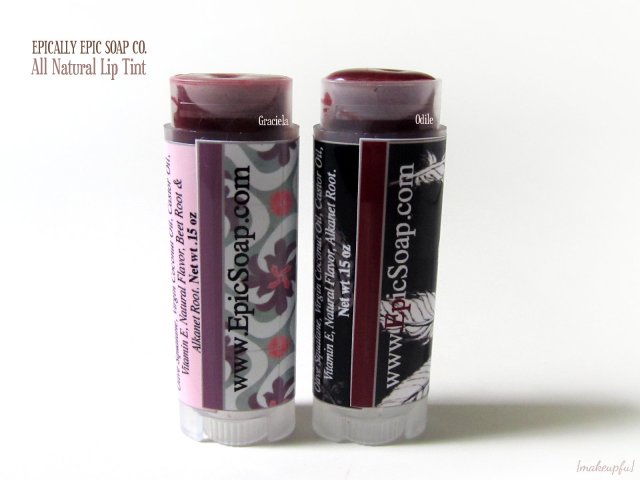 Reverse of the Natural Lip Tints.

I’m not a fan of the labels. They’re kind of sticky to the touch and I think they are the same labels as the ones used by Ophelia Apothecary. Those are easily damaged and almost all of mine have been scratched and scraped.

The labels for these lip tints by Epically Epic have a very different design as compared to previous lip balms/tints. 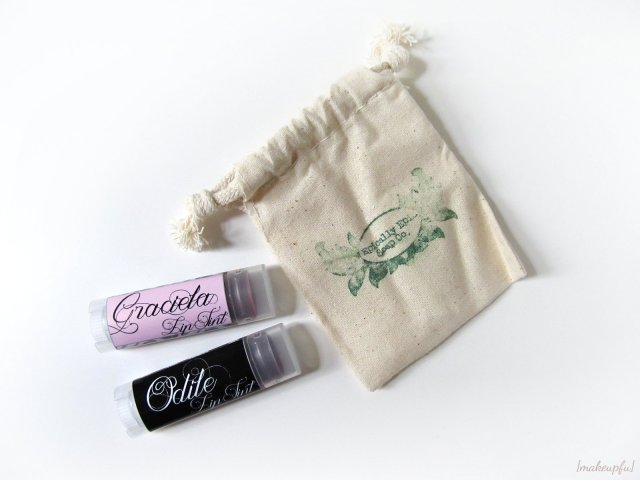 My two lip tints arrived in a muslin bag stamped with the Epically Epic logo. I’ve had several orders from Epically Epic before, but this is the first time I’ve received a cute little bag.

Epically Epic had some of the best lip formulas around. If you don’t like vegan lip products because you find them drying, definitely give any of the Epically Epic lip products a try. They are super moisturizing.

The natural lip tints are more sheer than color, but the shades I bought are dark enough for a fair amount of payoff.

All shades contain natural flavors that some might find bothersome. Specific flavors are listed below for both shades.

As I mentioned earlier, there are five shades to date. Two are pink/red based and three are an orangish brown.

All of the natural lip tints feature natural colorants. This means they don’t have micas or dyes, but instead contain alkanet root, cocoa, beet, and madder root, depending on which shade you order. I worried that the lip tints wouldn’t have good payoff, but I’m happy to report that they have moderate payoff, as should be expected, given their lip tint status. While you’re not going to get a lipstick amount of payoff, you will get enough that there’s a noticeable darkening of the lips. I like how there’s a visible reddening to my lips, but it still looks natural.

In the swatches, you can see that there is some little flecks of colorant. This is a byproduct of the natural colorants, but fortunately the flecks aren’t noticeable once applied to the lips.

My one complaint is that these two particular shades are similar to one another. Had I known, I would have chosen Carmen, a reddish orange shade. 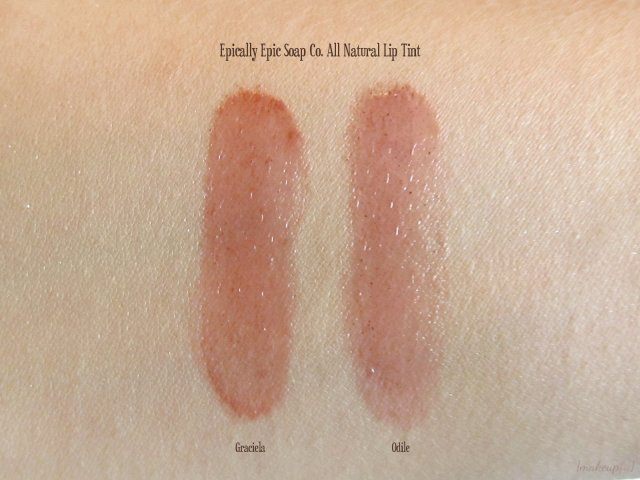 Swatches of Graciela and Odile

This is a pretty, sheer cherry shade. It gets its red from a combination of alkanet and beet roots. Though it is sheer as lip tints are supposed to be, it is also surprisingly pigmented, considering the color source. It’s very natural looking.

Graciela is naturally flavored with passionfruit.

This is more of a vampy red shade. It gets its red from alkanet root. It has a similar color and depth to Graciela, but with more of a purple, possible grey, undertone. Though it is darker in the tube, Odile is slightly lighter on the lips.

Odile is naturally flavored with red apple and blackberry.

Pros: Very moisturizing formula, none of the shades have shimmer, paraben-free, natural looking shades
Cons: Contains a natural flavor that some may not like, currently the line only has five shades

I’m always excited to see new product lines from my favorite indie companies. The new natural lip tints are a great addition to the Epically Epic brand and I hope the range is expanded in the future.