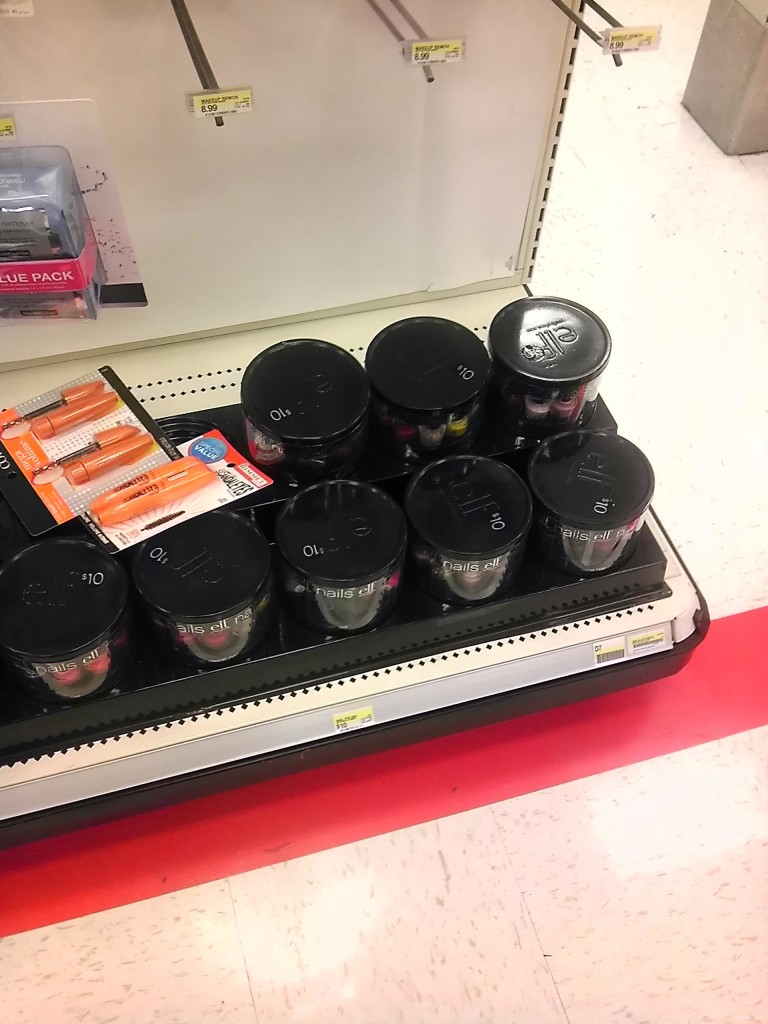 Update 8/26/2013: I went back to Target yesterday and took a good look at everything. I’ve updated the erroneously sections as needed.

There were two new nail polish sets for $10 USD (Update: The two nail polish tubs are unfortunately numbered, not named, so that makes it more difficult to keep track of the sets). I think there must have been ten polishes in each, since that’s how e.l.f. usually does things (Update: I did confirm that the nail polish tubs are 10-piece sets). Unfortunately, my camera phone didn’t pick up a lot of detail. Target was really busy and the sets were right at the front of the store, so I didn’t have lots of time to take good photos.

The sets have the same bottles as the 10-Piece Nail Polish Set introduced last year, but were packaged in a clear tub with a black lid, sort of like those plastic, gift paint can cylinders.

Both sets are made up of completely new shade combinations. While I can’t recall seeing any new colors, I do remember that one set had a yellow polish. So far, I have only seen this shade offered in sets and not individually. Update: The mysterious yellow is called Sunflower and is also available in the e.l.f. Essential 14-Piece Spring Nail Cube. I had overlooked the set earlier.

Update: Purple must be in this fall because I noticed a bunch of them.

The sets were located on the bottom shelf of an end cap that was nowhere near the main Glam U/Beauty School end cap display. My Target store usually puts the e.l.f. promotions on a back end cap next to where the main e.l.f. line is. I found the nail polish tubs right up front on the aisle nearest the food section (the bath & body/natural products like Giovanni and Jason one). There weren’t any other e.l.f. products on that display.

I have searched the Internets and cannot find any info on these bad boys. I’ll post an update when/if I find out more.

On my way to rendezvousing with my hubby in the gaming section, I found a cardboard display in the girls department that had a couple of nail polish trios for $3.99 USD. I think it may have been a back to school thing. But get this: one was labeled as e.l.f. while the other sported the e.l.f. Sugarkiss logo. I had a sneaking suspicion that Toys “R” Us wasn’t the only store getting the Sugarkiss label.

I recognized Mint Cream and Fairy Dust in the e.l.f. nail polish trio. There was also a . I didn’t actually pick it to check the names, but you get an idea of the colors.

Update: I tried to check the shade names but they weren’t listed on the packaging and the bottoms of the bottles were covered up. After comparing the two sets, I’m positive it’s Mango Madness because it’s definitely an orange. I got mixed up because the pink and orange shades are very similar.

If I didn’t own all of these shades, I would have been tempted to buy this set. It’s super pretty.

The e.l.f. Sugarkiss trio has Sunflower, a dark glitter— definitely Chic Confetti—and most likely Flirty Fuchsia. I was more interested in that yellow shade that’s been popping up everywhere than the other two colors (Update: It’s Sunflower, a different color than the e.l.f. Sugarkiss yellow). I’m pretty sure the other two shades were not LE or anything (Update: Chic Confetti is definitely not LE; Sunflower and Flirty Fuchsia are not new, but only in certain LE sets).