I think my local Walgreens have really upped their game, because I actually found the limited edition holiday e.l.f. sets. I haven’t even seen the sets at Target yet (I’ll be doing another little recon mission in the next couple of days). By the way, the holiday sets are different between the two stores.

Most of the holiday sets were located on top shelves above the hair accessories. This section is one aisle in from the cosmetics area at my Walgreens. I’m telling you it’s really inconvenient as a 5′ tall person to get a good look at the products when they’re well overhead. I made my husband get various items down to get a better look. It did not help that some of the sets were precariously perched on top of each other. I was afraid one of the displays would come crashing down when I attempted to remove a Beauty Book.

White and gold was definitely the theme here. The sets consisted primarily of the new geometric palettes. I’m getting a funny feeling that the limited edition palettes are not going to be so limited in the end.

Keep in mind that most of the sets include natural fiber brushes.

There was also a 12 Piece Nail Polish Set on the top row of an end cap filled with holiday sets. It’s similar to the Nail Cubes that are sometimes available at Target, but these were different because they were not cubes, but rather rectangles. This set sported mostly bright shades and includes the purple/gold glitter top coat also in this year’s Disney Villains Nail Cube (an Ursula color).

I didn’t need anymore of the geometric palettes, and I wasn’t feeling the eyeshadow duos, so I picked up a Beauty Book: Nude (there were two versions). 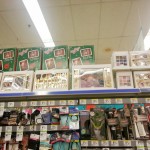 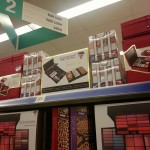 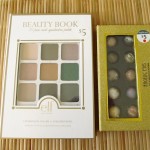