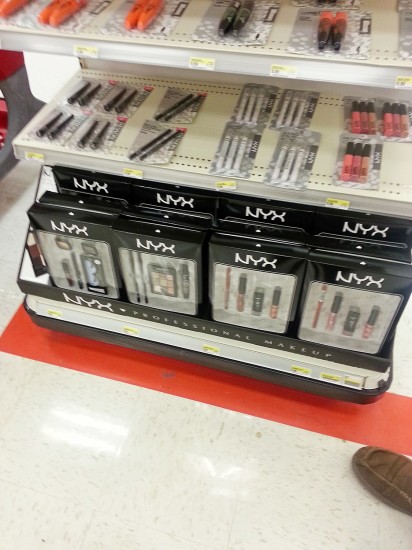 Apologies for the blurry photo…

Could it be true? NYX at my local Target?!

Actually, I’m not sure why I’m excited to find NYX at my local Target. I don’t buy too often from the company based on their unclear ingredients disclaimer…and also because there’s an Ulta a mile away that carries a full line.

I think I’m excited because even though I live in the second largest city in the state of Iowa, we rarely get anything good. While Cedar Rapids isn’t huge, it’s still about 300k metro population and not the pastoral countryside I expected when I first moved here.

Take Pacifica, for example. I just learned that most Targets carry a full line (or fuller line, I should say) of products. But both of the Cedar Rapids stores only carry the Radiant Multiples, Enlighten Eye Brightening Mineral Eye Shadow Palette, Tuscan Blood Orange Take Me There Set, roll on perfumes, and lip tints. And concerning e.l.f., it took our stores over a year to carry e.l.f. regularly after the announcement that Target would start carrying e.l.f. So though it will likely take months for Target to carry NYX regularly, they probably will carry the full line in the future.

I only hope that the Pacifica line will be expanded at some point. I’d really like to try that Alight BB cream.

The display was looking pretty funky when I found it. There were the sets on their own display on the bottom shelf of the endcap, and also some hanging NYX items–jumbo eyeshadow trios and lip gloss trios–as well as tons of other products lying on shelves. When I went back to Target the next day, the shelves had been converted to hanging displays and looked much more orderly.

First, none of the box sets are vegan. Sorry to get your hopes up. All of the sets had at least one product that contained carmine, including the eyeshadow palette and, surprisingly, the eyeliner pencils. Other products contained beeswax, and I think lanolin. The jumbo eyeshadow pencil trios were also not vegan. Beeswax, I think. 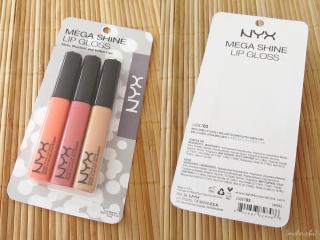 The only thing that looked okay was the Mega Shine Lip Gloss trio that I purchased.

Keep in mind, that NYX has been cagey about their ingredients, although they have insinuated in the past (list on site not entirely accurate, check labels) that the only things to worry about are lanolin, carmine and beeswax.

This stance, however, may be troubling to some vegans.