There are actually 43 makeup products, along with three applicators, that make up the 47 piece clutch. If you do plan to travel with this Total Face Clutch, you’ll need to bring along some additional tools.

Though I ordered my clutch through the e.l.f. website, the box is the same as the one you’ll find at Target, with the white box and glittery triangles. You can only see the second tray when the clutch is in the box, since the lid is still closed. I felt that was kind of odd, since it seems like the eyeshadows are the main draw of the palette.

Like most of the Winter Holiday 2013 packaging, the clutch is a white plastic, instead of the original black. 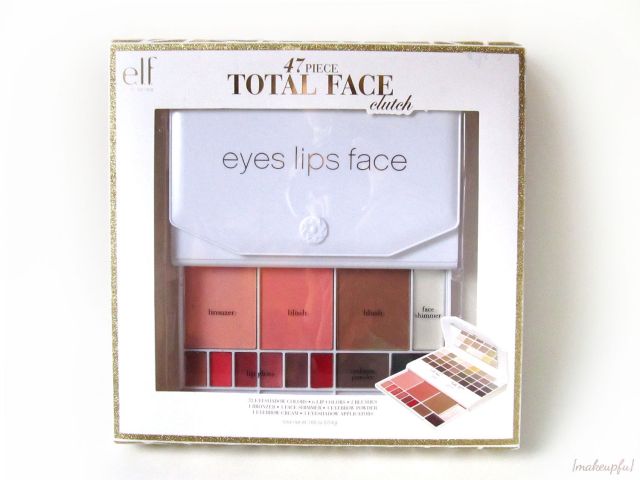 The box packaging is the same as Target’s

The packaging is a thin, satiny plastic. It does feel a bit flimsy. At first, I had difficulty opening the bottom tray until I noticed the half moon divot underneath. If you press lightly in the divot, the tray will pop out. 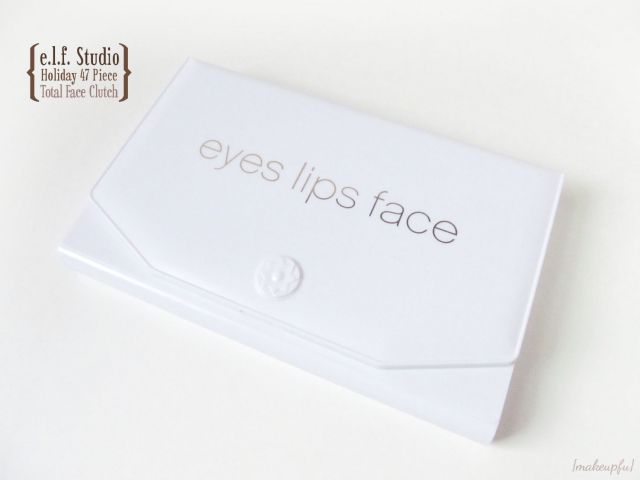 Despite the term “clutch”, this is your standard, two layer palette. It may look like a clutch, but it doesn’t function like one. The lid opens to reveal thirty-two pans of eyeshadows, as well as three recessed wells to hold the double-ended sponge applicators. Speaking of the lid, it contains one huge mirror. The three applicators are the only ones included with the clutch. There are no lip or blush brushes. That’s good for vegans, since e.l.f. usually includes animal fiber brushes, but it is odd from a practical standpoint.

The bottom tray holds two blushes, a bronzer, six lip glosses, a brow powder, and brow gel. The blushes and bronzers are surprisingly matte—a departure from the usual shimmers e.l.f. puts into their palettes. There are issues with the blush powders migrating into the lip glosses. 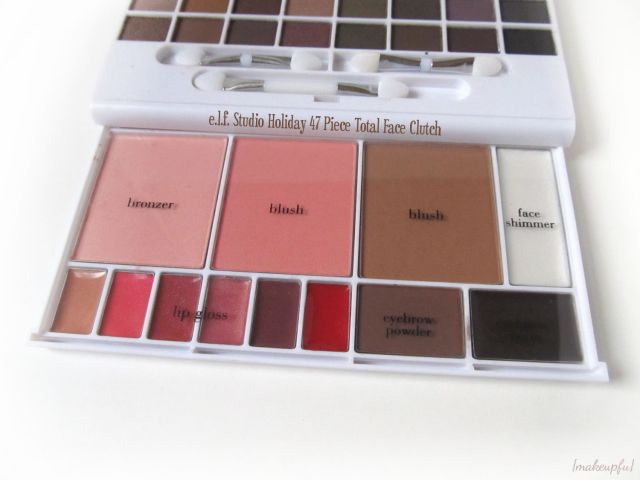 There’s a printing error on the plastic film for the blush and bronzer.

You’ll notice in the photos that the bronzer is listed as a blush and one of the blushes as a bronzer. The original Makeup Clutch Palette had the end blush and bronzer swapped. Apparently e.l.f. didn’t get a new insert liner with the correct listings.

Normally, I keep the plastic inserts, but this one kept getting in the way and prevented the bottom tray from closing, so I no longer keep it in the clutch.

Overall, the formula is good for all of the products. Nothing really stands out, but nothing, save one lip gloss, is terrible. Some of the shadows have a “creamy” consistency, especially the metallic shades. That helps with application.

If you have other e.l.f. products, the consistency for this clutch will be familiar. 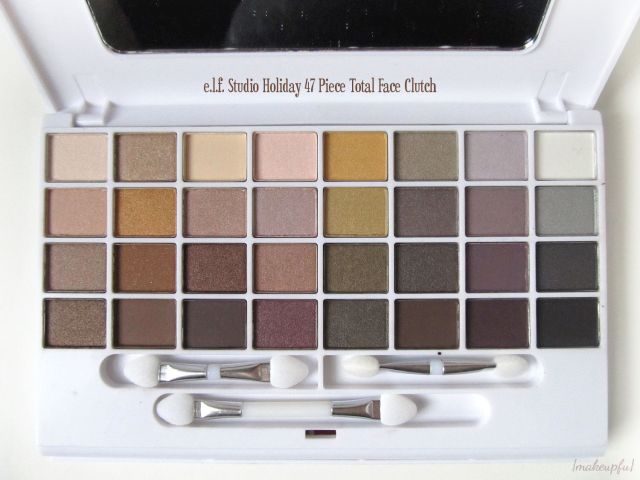 The top tray of the Total Face Clutch 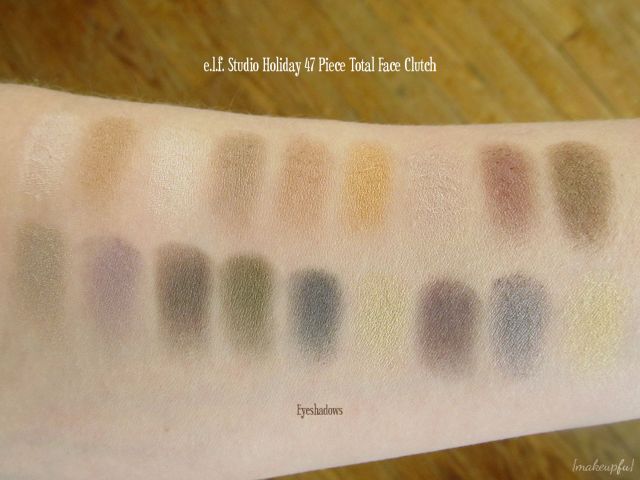 There are eight rows by four columns of pans for a total of 32 shades. The eyeshadows are more or less divided down the middle into warm/pink shades on the left, and cool shades on the right. All of the shadows are very pretty.

Almost all are metallic or shimmery. Only a few are mattes or pearls. Thankfully, there aren’t any straight up glitter shades.

The left side is very reminiscent of the Urban Decay Naked 3 Palette, with it’s rosy shades. I tend to focus on this side because these are my favorite kind of shades.

The right side has varying shades of green, purple and grey/black. I usually can’t pull off these types of shades, due to my warm skin tone, but the shades are muddy enough that I can get away with it.

There is some pigmentation issues, namely, you won’t get a lot of definition with the eyeshadows, but rather a “soft” look. This is very common with e.l.f. shadows. I still think they work well enough and you can get a wide range of looks with the clutch.

Try using the shadows wet if you want more definition. 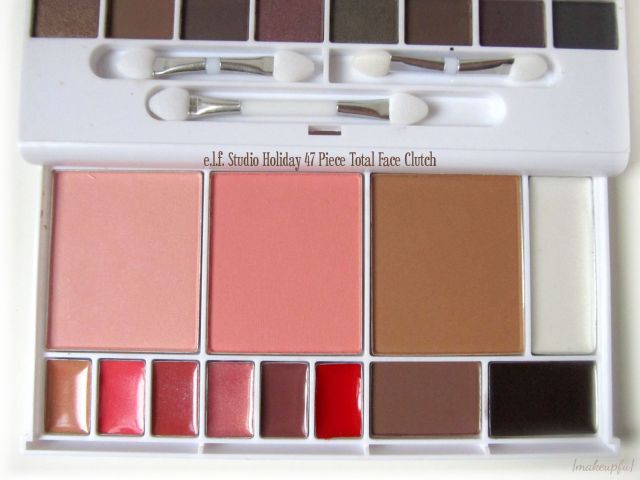 The bottom tray of the Total Face Clutch 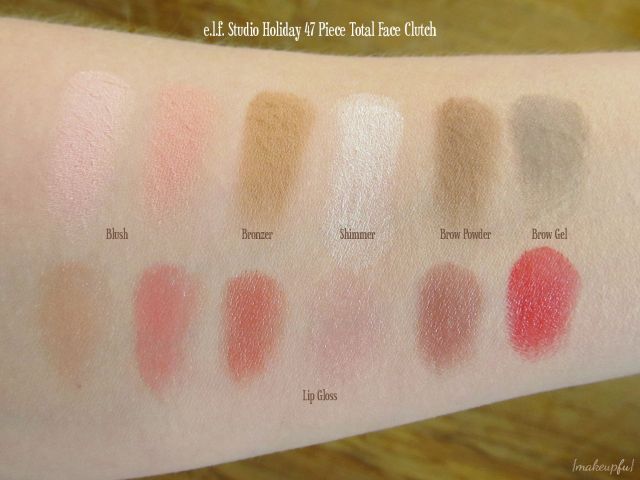 Swatches from the bottom tray of the Total Face Clutch

Overall, the clutch appears to be aimed at those with fair to light or medium skin tones.

There are two matte blushes included: a light pink and a medium pink. Both are really pretty, though the light pink is really light and probably won’t show up on darker skin tones. Both are matte.

It’s nice to see true pinks that are not made with carmine.

The bronzer is a medium shade and should work for those of us on the lighter end of the spectrum. e.l.f. likes to make darker bronzers, so it’s nice to see some lighter shades. Again, the bronzer is matte.

The white of the shimmer at first glance feels a little severe, but it works well as a highlighter, especially on the upper cheekbones.

There are six glosses in an array of shades. There is some issues with color payoffs—especially the lovely pink four shades from the left that has zero pigmentation—but most are workable.

The rest of the palette feels geared at those on the lighter end of spectrum, so these medium to dark brow colors seem out of place.

I bought my Total Face Clutch during one of e.l.f.’s 50% Studio, making it $5 USD. I wasn’t sure if I would like it—I didn’t hear many good things about the original Makeup Clutch Palette—but I figured it was worth a shot for five bucks. I had seen the clutch in Target earlier, but I couldn’t get a feel for the eyeshadows since they weren’t exposed in the box.

After trying it, I think $10 is a fair price for the clutch, even accounting for the flimsy packaging and pigmentation issues. There’s enough going for it to overcome the drawbacks. It the clutch retailed for $15 or $20, I wouldn’t be as lenient with my rating.

All of the colors are very pretty and would work best for those in the fair to medium skin tone range. These are the types of colors vegan don’t usually get in palettes because most similar offering usually contain carmine. It’s nice to get pretty pinks, not the usual orange offerings. 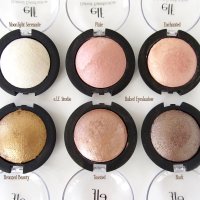