I’m so excited about my Petit Vour 2014 Limited Luxury Spring Collection Box! This is just a little teaser. I’m still in the middle of trying everything, so I won’t be doing a few review until I get a good feel for the products. But that shouldn’t take long. I’ve already tried most of them!

When Petit Vour released the Limited Luxury Box, I was excited, but hadn’t expected to get it as things in my household are tight at the moment. As a refresher, the LE box contains six all-vegan items that normally retail for $100 USD individually, but are offered in the box for $40 USD. And that includes shipping.

Unlike the monthly boxes, this box arrived wrapped in kraft paper. I was very surprised to find a black satin box instead of the usual pink. Here’s how the box looks when you first open it up and remove the info card. 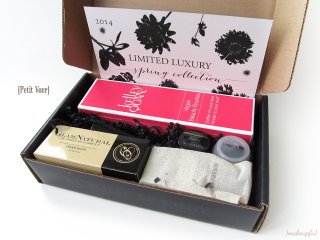 My box included the following items:

PV refers to it as the Spring Collection, so I’m thinking (hoping) there may be additional LE boxes in the future.

As I mentioned earlier, while I wanted to buy it, didn’t think I would be able to. Until last week. I got a couple of odd notices via my phone that I had won the Petit Vour contest. At first I was confused. Contest? What contest? Did I enter a contest?

At some point it dawned on me that the info card for the March box had said to take photos of the PV boxes and post them to Instagram and Twitter. I’m not sure how I forgot, but the contest was one of the driving forces behind my decision to change my Instagram account.

So I turned out to be the winner of the first PV photo contest! Definitely great timing. I was so excited that I could get my hands on the LE box (I did contact PV to make sure that it was okay and I was not taking advantage of the situation). To make up the $10 difference, I also purchased a set of NCLA strips in Candy Floss. I remember seeing them in one of the Vegan Cut’s Beauty Box and thinking they were cute.

So the moral here is that if you want to win a $50 gift certificate to the Petit Vour store, get some good lighting and upload some quality photos to Instagram! Tag your photos with the hashtags #petitvour and #veganbeauty. They’ll be holding the monthly photo contest until announced otherwise.