e.l.f. Essential: All Over Color Stick vs. Shimmering Facial Whip 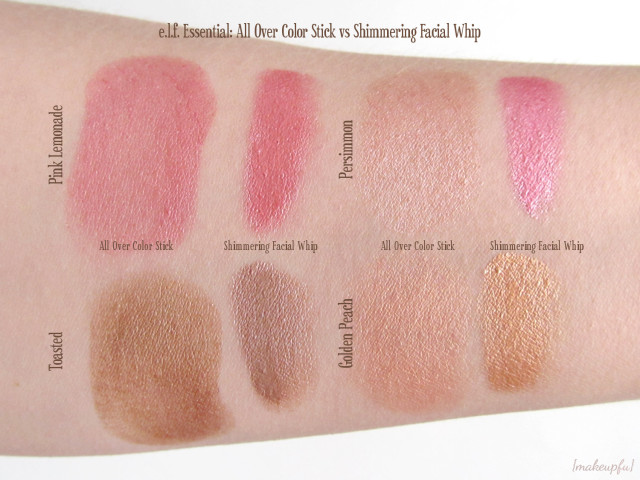 e.l.f. sports many products that share the same shade name. It’s always interesting to see the differences between the shades when presented in different products. Sometimes the products look similar, while other times they look nothing alike.

This time around is a comparison between the Essential All Over Color Sticks and the Shimmering Facial Whips. There are other shades available, past and present, but these are the four I own in both products. These face highlighters have been the backbone of e.l.f. for much of the company’s history. They also continue to retail for $1 each. Though both are touted as an all-in-one face product for the eyes, lips, and cheeks, I find they work better as blush/highlighter products.

I’m such a big fan of the All Over Color Stick—it happens to be one of my Holy Grail products—but the Shimmering Facial Whip just doesn’t do it for me. 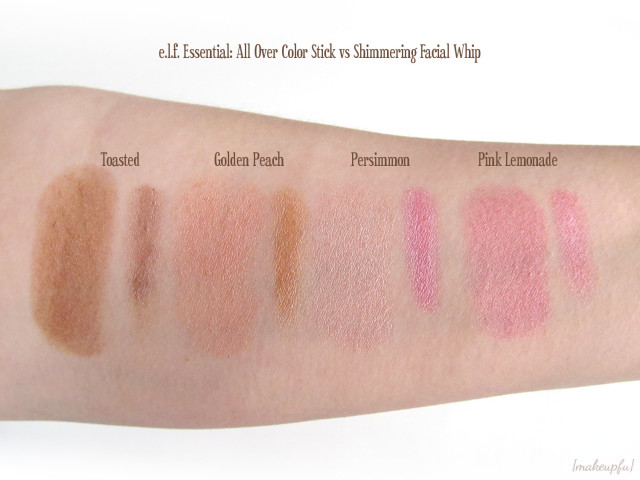 The All Over Color Stick version is more of a cool undertoned, light pink suitable for highlighting, whereas the Shimmering Facial Whip is a bright pink that stands alone as a blush.

Unlike the previous three pairs, the All Over Color Stick and Shimmering Facial Whip for Pink Lemonade are almost identical. Over the years there have been many incarnations of the shade Pink Lemonade, and the color has usually been consistent.

You can see other products with the shade name Pink Lemonade in the gallery of this post.

Ultimately, the main issue comes down to formulation as to whether you prefer one over the other. The All Over Color Sticks are a lighter, creamy consistency, whereas the Shimmering Facial Whips are more pigmented.

Be that the Shimmering Facial Whips will separate with time and will need to be replaced. I’ve already had to toss Toasted and Persimmon for that reason.