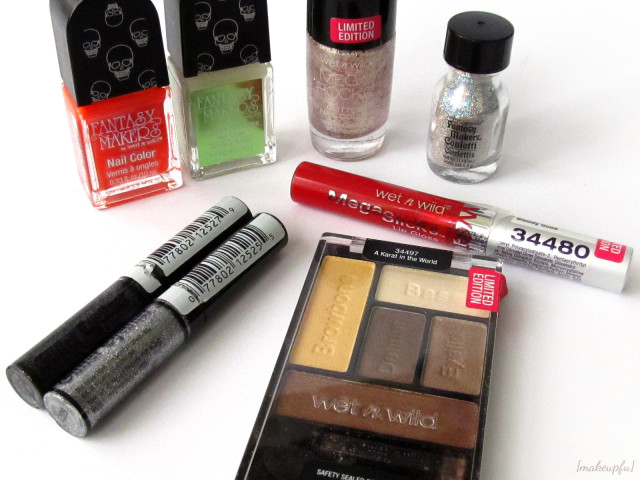 Fall and Halloween are my favorite times of the year. Since I’ve really gotten into the world of cosmetics—thanks to blogging—I’ve also come to expect some nifty LE products during the autumnal season. Last week I made a stop at Walgreens to see if they had any new Wet n Wild collections. While the fall collection was lacking, there were some good displays for Halloween cosmetics, as well as some straggling summer collections. For some reason I ended up with a lot of polish after this visit.

I think some people have had access to the new LE products from Wet n Wild, and their seasonal line Fantasy Makers, since August. I don’t know when my local Walgreens started carrying the products, but this is the first time I’ve been to Walgreens in over a month, since I gave up looking for the LE e.l.f. Disney Princess makeup sets and bought them online. Incidentally, my Walgreens had many of the Snow White sets (you can find more info here), including a couple of nail sets that weren’t available online. If you are interested in seeing what the nail sets look like, you can find a picture on this blog (scroll to the end of her post). In my searching, I also found a random Snow White hair band set in the Halloween aisle.

Apologies for the lack of photos. The last time I went to photography the Disney Ariel products at Walgreens, I got the distinct impression the store didn’t want me doing so and couldn’t get any decent shots. 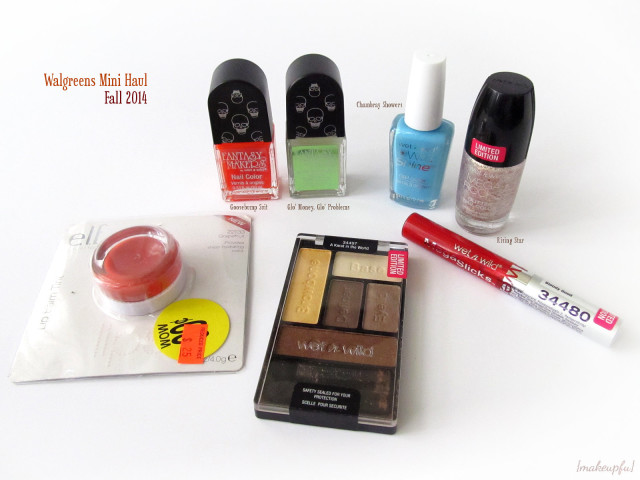 Despite all of my repeated visits to Walgreens over the summer, this is the first time I’ve seen anything from this collection. I only recall seeing the Wild Shine nail polishes and a few of the brightly colored makeup brushes, the latter having animal fiber bristles. Not sure if it’s included in this seasonal collection, but there is a yellow bristles foundation brush that has synthetic fibers.

I found some lovely new shades of Wild Shine polishes, and I would have purchased more polish if I had known they were on sale for $0.69. I picked up Chambray Showers (pictured above and below). It’s a robin’s egg blue I’ve been looking for and so far, am absolutely loving it.

I found a display for the LE Fall 2014 Matte Megalast nail polishes and Limited Edition Megalast Matte Collection, but the display only had polishes. I didn’t realize the display held lipsticks until I did a search later.

All of the polish shades at my store were available. I was tempted to buy a couple, but I had limited funds at the time, and I technically don’t need any as I can make any nail polish matte with the super awesome Wet n Wild Matte Top Coat (my review here). 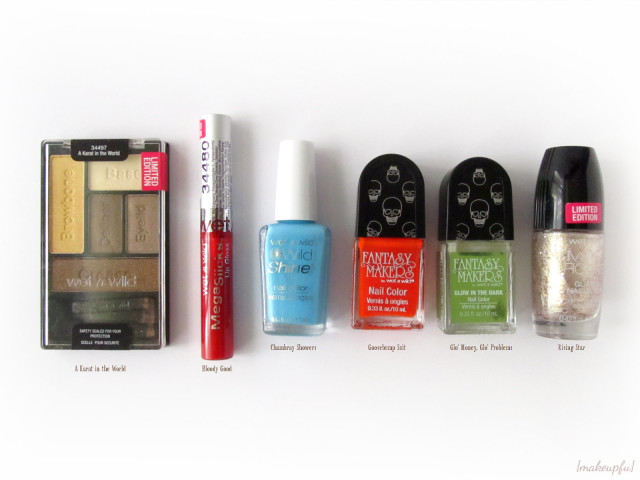 The display was a mix of LE and regular line products. You can see pictures of the display I saw at Nouveau Cheap. My display was picked over when I visited Walgreens.

Now for the really, really bad news: almost every single lipstick listed carmine on the label. Part of me wanted to discard that as a mistake or not applicable due to the “may contain” clause. However, recently Wet n Wild has begun using separate labels for products depending on whether they do or don’t contain carmine. Since MegaLast lipsticks don’t contain carmine in the first place, I can’t see why they would start using a new label at this point. This leads me to conclude the LE lipsticks really do contain carmine.

Have you ever looked straight at a product in the store, reached for that item, only to discover at home that you bought the wrong item? That may have possible happened during my visit. I had five or so MegaLast lipsticks in my hand, struggling to read the fine print on the labels and discarding anything from the regular line. I thought I had succeeded in finding an LE shade that would work, but when I got home discovered I had actually bought 901B Think Pink, a shade from the regular line and one I already own. I don’t know if I put the wrong shade back or if that was the shade I had looked at in the store.

I will mention that there was a 900B Pink Suga’ shade that did not list carmine. I had initially believed this shade was still in the regular line up, but my Walgreens doesn’t normally carry it. The Wet n Wild site, however, shows that the shade is still in their regular line up. If you’ve been trying to find this shade and your stores have a limited selection, like mine, you’re in luck.

I believe there was a nude color, probably Clothing Optional, in the LE collection that also did not contain carmine. I did not purchase this shade because it would not look good on me, but now I’m kind of wishing I had so I could double check the name and ingredients.

So, at best, there is one LE MegaLast lipstick not containing carmine.

Some of the Idol Eyes Creme Shadows in the display were from the regular line, but there were three new shades. I believe all are carmine free: In from LA (white), Who Are You Wearing? and Brunching Downtown. The two latter shades listed are a russet brown and a gold, but I don’t remember which is which. 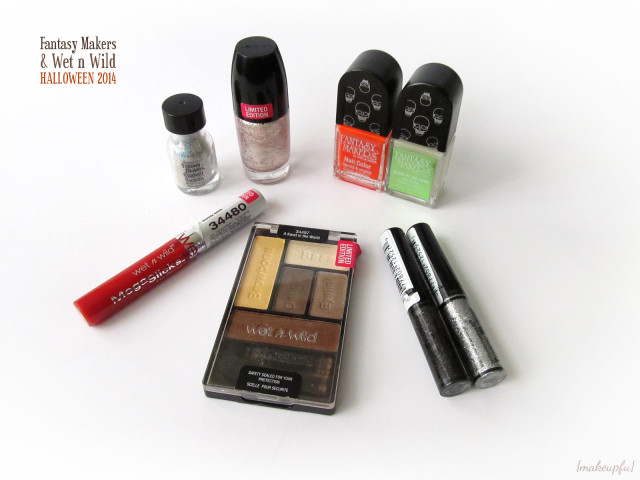 A few of this year’s vegan options in the Wet n Wild and Fantasy Makers 2014 Halloween collections.

If you’ve happened to read my previous review on the 5 Pan ColorIcon Palettes, you would know I am not a fan, to put it mildly. After loving the ColorIcon Trio Palettes, I was very disappointed with the consistency of the 5 pan version. I have recently learned, however, that the palettes are being reformulated.

It is rumored that the 5 Pan ColorIcon Palettes in the Fall 2014 collection are the reformulated versions. Due to this, I thought I would give them a second chance, providing there were vegan options. I’ve given up on looking for vegan versions of the LE ColorIcon Trios, as they always contain carmine, but I hoped I could find something in the 5 pan palettes. After comparing the palettes, I found the ingredients to be slightly different from each other.

The Halloween display at my Walgreens was mostly out of palettes, but I did manage to find two of the LE versions. 34477 Daring Downtown unfortunately listed carmine, but 34479 A Karat in the World did not list. The redo of 395A The Naked Truth, that I’ve previously reviewed, called 34496 Haute Hollywood was not available when I visited, so I could not purchase it and compare it to the original.

Please note that these have not been confirmed vegan by Wet n Wild.

I didn’t notice any of the new shades in the MegaLast Nail Polishes apart from Pot of Gold, which is a redux from last year. All MegaLast polishes should be vegan.

All Mega Rocks Glitter Nail Colors shades should be vegan (they’re basically just chunky glitter in clear polish anyway). The only new shade for this collection is 34493 Rising Star (pictured in the photos above).

I did not check these, but they should be vegan.

The regular line is not vegan, so I did not check for any new shades. 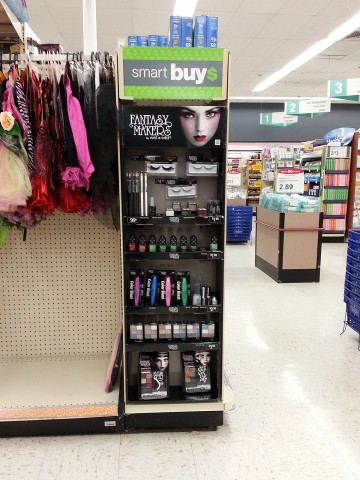 I thought I had seen all of the new LE Wet n Wild products, but a trip into the seasonal aisle revealed a Fantasy Makers end display.

This is great because I had so much trouble finding larger displays last year. Normally Kmart would carry a display, but my local store closed down last year. And Spirit stores are out as Cedar Rapids is not a large enough market to host such stores.

In 2012, I only discovered the tombstone nail polishes near Halloween and had to scramble to find anything. I ultimately found one polish at Ulta. In 2013 I was prepared, but as I mentioned earlier, my Kmart was closing down during that time and never received any Fantasy Makers products (I remember that they did have a display the year before, but for some reason didn’t make an impact; probably because I didn’t realize WnW carried vegan items). I could only find one black version at CVS.

I’ll go row by row, starting with the top of the display.

The eyeliners should be the ColorIcon Brow & Eye Liners in 656A White and 651 Black Black from the main Wet n Wild line. While the company lists them as vegan, they are in fact not.

The black Wild Shine nail polish should be the same as from the main line—424A Black Crème—and is vegan regardless.

The false lashes should be fine, too.

I forgot to check the ColorIcon Glitter Singles, but they look like the same products from the main WnW line. Double-check the ingredients for carmine. Otherwise they should be fine.

The lipstick in Black is not vegan.

Tombstone nail polishes, newly redesigned, should all be vegan. I believe there are six shades this year: Goosebump Suit (deep orange), Ghouls Rush In (a maroon), Roach Busters (a shimmery light green), Queen of Envy (a darker green), Witch Black, and Glo’ Money, Glo’ Problems (a glow-in-the-dark polish). I suspect Witch Black is the same as last year’s Darkest Hour.

I wanted to get Roach Busters, but my son liked Goosebump Suit, so that’s what I purchased, along with Glo’ Money, Glo’ Problems. This is the third year I’ve searched for the glow-in-the-dark tombstone polish so I had to get it.

None of the four Color Blast mascaras (purple, blue, pink, mint) I checked were vegan.

The Glitter Gel, Glitter Liquid Eyeliners in Whimsical (silver) and Fantastical (black) (I reviewed these last year), and Confetti in Glitz (also reviewed) should all be vegan.

I found one 6 pan glitter palette containing carmine and one without (the palette on the outermost right). While at the store, I did not notice that there were more than two versions.

I did not check these makeup sets, but they haven’t been entirely vegan in the past.

There are a ton of limited edition products this year from Wet n Wild. Apart from the disappointing amount of non-vegan products, there are still more options than I had expected.

Disclaimer: This list is not conclusive, nor verified with the manufacturer(s). There may be errors with the list. Always use your judgment when purchasing unverified vegan cosmetics.