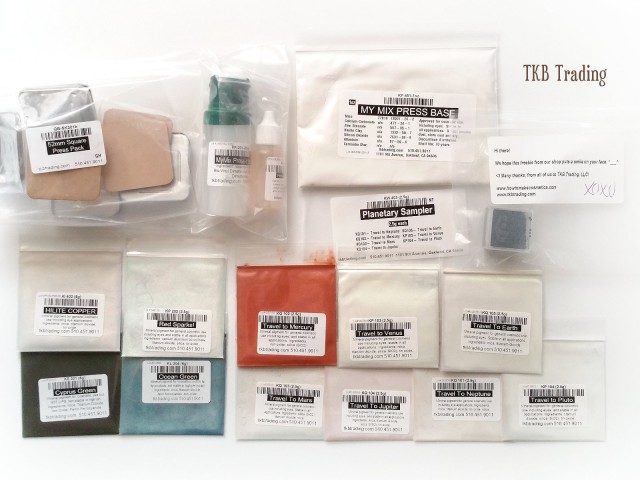 My recent order from TKB Trading

There have been a few eyeshadows I’ve had my eye on recently, but I’ve been reluctant to buy more makeup given how much I already own. Since I have a large DIY mineral makeup kit from TKB Trading lying around, filled with lots of lovely shades just waiting to be mixed into new eyeshadows, I thought it would be better to use those up before purchasing more makeup.

For those of you unfamiliar with TKB, if you’ve ever purchased indie makeup from sites like etsy, you’ve most likely bought cosmetics made from TKB ingredients. They sell tons of micas and base ingredients for mineral makeup, lip products and polishes.

Along with a preservative for mineral makeup, I ordered mostly color shifting—or interference—micas for eyeshadows. I love complicated eyeshadows. I had to get the Planetary sampler, being the space nerd I am. It does bug me that two planets are missing (Saturn and Uranus), but Pluto is still included. The set includes the following seven samples: Travel to Mercury, Travel to Venus, Travel to Earth, Travel to Mars, Travel to Jupiter, Travel to Neptune, and Travel to Pluto. I also picked up Red Sparks and Hilite Copper. Red Sparks looks kind of green in the packaging, so that’s intriguing. The downside is that there isn’t as much to the sample as there are in the others.

After looking at so many beautiful mica colors, I decided to round out my existing stash with a couple of green based samples in Cyprus Green and Ocean Green. I want to dupe the lovely Flower Shop by ColourPop, but don’t want to pay that much for a shade that probably won’t work well with my skin tone. I think Ocean Green will make a nice base for a dupe. One of the interference micas I picked up this order should turn it into a duochrome.

One of my main goals for this particular order was to pick up some products to try my hand at that famous rainbow highlighter.

You know the one.

I purchased a set of nine 52mm square pans plus pressing tools, a TKB MyMix Press Base, and the MyMix Clear Pressing Medium. I should have bought more of the pressing base in retrospect. One ounce seemed like a lot, but there’s not as much as I expected. I thought these larger square pans would work nicely for a rainbow highlighter, but after looking at the rainbow palette, I think the smaller round or square pans would have been better. Oh well. It’s not like these pans won’t work and I had some other ideas for blush/highlighter/bronzer combos.

I’ve watched many YouTube DIY videos on making rainbow highlighters, but so far they’ve all involved purchased highlighter and eyeshadow palettes, along with rubbing alcohol. While this will work, it’s a quick and dirty method that won’t produce the best results. Plus, using only alcohol to bind the ingredients together will make a very fragile palette. If you happen to have all these items on hand, and you just want something quick, then it’s not necessarily a bad route to take. But I’ve seen people spend a lot when they could have bought better supplies from TKB for less money and have much, much prettier results.

While all of the tutorials I’ve watched show the colors laid down and pressed in one go, you should use at least three layers, pressing after each one. Three layers is generally the standard when pressing your own makeup.

One thing I noticed about the rainbow highlighter everyone loves is the finish. This is pure speculation on my part, but I believe it contains a healthy amount of interference mica—or in cosmetics terms, the micas that make duochrome colors “shift”. Since the highlighter is not vegan, completely sold out, and I’ve not seen it in person, I can’t say this with complete certainty. However, I suspect that’s why people recreating the highlighter aren’t getting the finish they want. They’re using a premade highlighter and sometimes shimmery eyeshadow to get a shimmery finish, when they need some interference mica to get that ethereal glow.

If you don’t want to go with TKB and you already have a bunch of mineral eyeshadow lying around, I would start off with those. They’ll be much easier to work with than trying to crush pan eyeshadows without a standard coffee grinder or mortar and pestal. Duochrome mineral eyeshadows are even better.

So there’s a few tips by me if you want to try your hand at making your own rainbow highlighter. I’m by no means an expert in DIY mineral makeup, but I thought I’d throw out some info I’ve learned along the way.

I did receive an extra with my order. TKB tossed in some solvent resistant, black hex glitter for nail polish.

Just a warning if you do decide to buy from TKB Trading. While the vast majority of ingredients are vegan, there are some exceptions. It’s fairly simple to see which products are vegan. Just watch out for carmine and beeswax. Everything is cruelty-free and all of the stearic acids are vegan. Here’s a link to the FAQ.