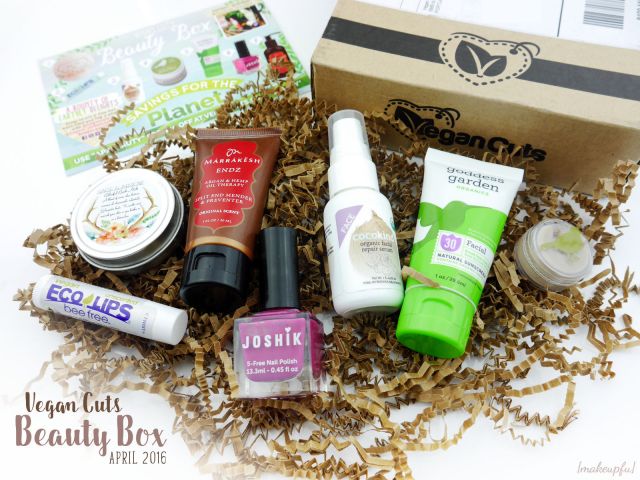 This is my fourth Beauty Box from Vegan Cuts since I cancelled my Petit Vour box subscription back in November. So far I’ve been very happy with the service and I find I do prefer it over Petit Vour.

For those of you unfamiliar, the Vegan Cuts Beauty Box is a monthly subscription service filled with cruelty-free and vegan beauty products. The box has now increased to $22.95/month, up from the previous $19.95.

The April box was amazing, chock full of vegan beauty goodies. There were seven different products for the face, hair and body. As usual there were lots of coupon codes for discounts, this time from Vegan Cuts, Joshik Polish and Cocokind. 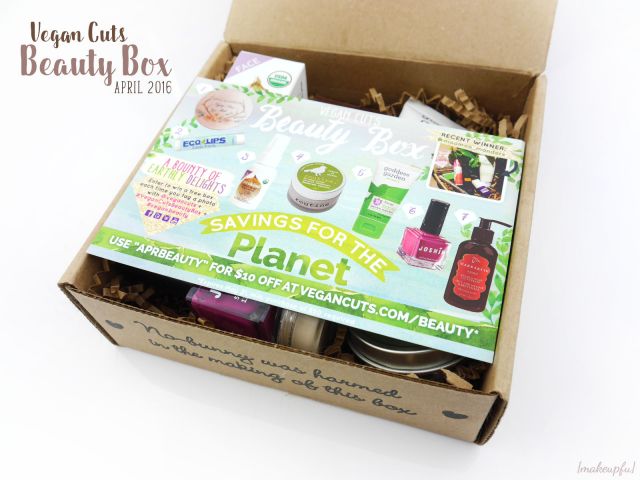 Subscribers this month received either a bath bomb or the bath melt.

My box had been left out in the sun on my porch in 80° weather and it completely slipped my mind that product melting could be a potential concern when opening the box. I ended up spilling a good deal of product when I opened the tin of this bath melt. Once it re-solidified, it seeped underneath the lid, making it difficult to open.

The bath melt returned to its solid state.

I was unsure on how to exactly use this until Sage & Arrow contacted me on Instagram. While in the bath, remove the lid and place the tin into the warm water until the product has melted. The tin also says you can use it as a lotion bar.

I haven’t used this yet, mostly because I don’t use oils in the bathtub, but it does smell nice.

Eco Lips is actually manufactured right here where I currently live in the small city of Cedar Rapids, Iowa, so I’m very familiar with the brand. Their products are everywhere.

Until now, I haven’t tried anything from Eco Lips. I think I may have tried a balm back when they were called Raining Rose, but that was a long time ago. Unfortunately, there aren’t many vegan products produced by Eco Lips. Besides the unscented lip balm, there is Lemon-Lime (the first vegan flavor, I believe), Superfruit, Pomegranate, Unflavored, Spearmint, and Sweet Mint. You can find those online here.

The balm itself is nice hard wax without any flavor or colorants. The label states that 20% of the product—the cocoa butter and coconut oil—is fair trade certified.

The Vegan Cuts card puts the value estimate at $2.50 USD, but I’ve not seen that price anywhere around here. It’s closer to $3. Even the Eco Lips website sells the balm for $3.49.

I initially thought this was a cream moisturizer by Cocokind, but it is a heavy, yellow oil. I’m really in need of a lighter moisturizer as we transition to summer. I’m using it since I don’t have anything else, but I think this would have been better suited in a winter box.

I have super dry skin so this product doesn’t bother my skin. However, you should be aware that coconut oil is high on the comedogenic scale, in case that is a concern for you.

This is the second sample I’ve received from Routine (the other was from a Petit Vour box, in Sexy Sadie I believe). It’s one of the better vegan deodorants out there, but still does little for me. Then again, traditional aluminum antiperspirants don’t work for me either.

You do have to use your fingers to apply the deodorant paste, something I’m not a fan of. It’s messy and the texture is very grainy.

I received the scent Lucy in the Sky. It’s not a very strong scent, but more faint and pleasantly earthy.

I first discovered Goddess Garden sunscreens at the new Lucky’s Market in Iowa City and had already purchased a sample of the sport version.

Despite the claim that this product works well under makeup, I have not found this to be true. It has a paste-like texture and looks cakey under makeup. I have very temperamental skin so I assumed it was just me having these issues, but after I was asked about my thoughts on the Goddess Garden sunscreen on Instagram, I discovered it was not just me who had issues wearing the sunscreen under makeup.

The product has a greyish-tan cast (the sport version is the same; looks a lot like the Routine deodorant) and a grainy feel, with an SPF rating of 30. The sun protection comes entirely from zinc oxide.

I would recommend this sunscreen on no-makeup days. If you are looking for a facial sunscreen to wear under makeup, I suggest the Alba Botanica facial sunscreen. It is on the oily side, so it probably won’t work for everyone. Otherwise, BB/CC creams and tinted moisturizers are your best option. 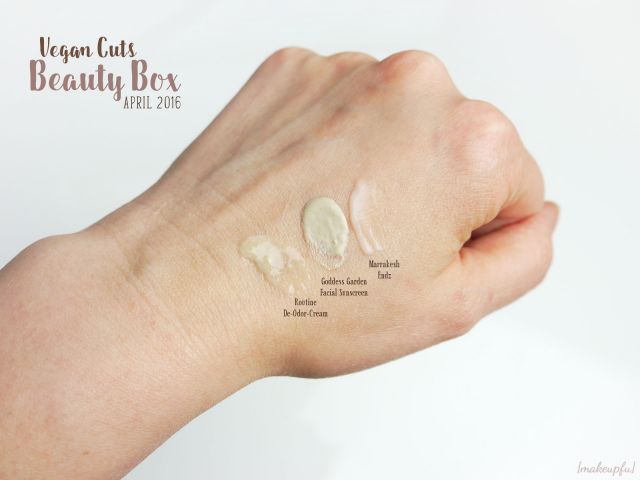 Comparison of Routine De-odor-cream in Lucy in the Sky, Goddess Garden Facial Sunscreen and Marrakesh Endz.

I don’t think I own any polishes in this shade—and that’s saying a lot considering how many polishes I own. While the Vegan Cuts card describes it as a cosmo pink, it looks more like a fuchsia to me. Either way, it’s a pretty shade and a good departure from all those deep red polishes in my collection.

This shade 254 (yes, that’s the name) is a 5-free polish. All Joshik polishes are PETA certified cruelty-free and vegan. 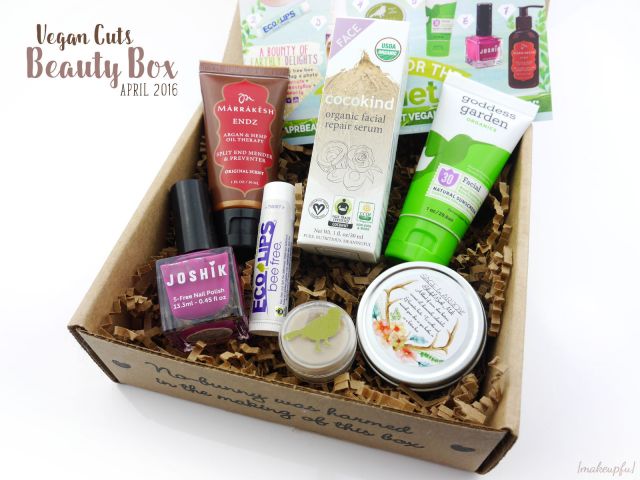 This hair products smells heavenly. If you’re a fan like me of warm spicy scents, you’ll enjoy this product. If this scent was a perfume or lotion, I would probably wear it every day.

Marrakesh Endz does a fairly good job of keeping my hair smooth and manageable, though dimethicone based serums—like Giovanni Frizz Be Gone or the Tara Smith Base Coat Serum from the previous VC Beauty Box—work better for me.

April was a great box featuring a slew of great vegan products to try. Vegan Cuts estimates the total value at just under $46 USD, so not too shabby. I really liked most of the products, the Goddess Garden sunblock not quite living up to my hopes.