Please note that it has recently been discovered that the Urban Decay Eyeshadow Priming Potions are not vegan. Everything else in the palette is still vegan. You can read more on the Urban Decay website.

Urban Decay has recently unveiled their Vegan Palette for the Fall 2010 lineup. The palette retails for $34 USD and can be ordered from the UD website, or purchased at/through Ulta. It features six eyeshadows (Minx, Urb, Gunmetal, Twice Baked, Smog, and Half-Baked), a travel-size 24/7 Glide-On Eye Pencil in Zero and a mini Eyeshadow Primer Potion Sin (w00t!) packaged in an adorable box covered with a plethora of animals.

Though I have been interested in Urban Decay products, I have not yet purchased anything due to the, uh, vibrant shades and cost (hard to justify $22 for lipstick when I have a whole drawer full of them, and I’d rather pay that amount for Zuzu Luxe). 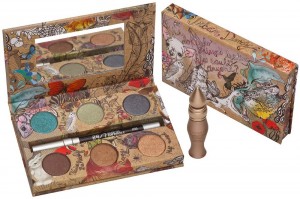 And while Urban Decay touts a cosmetics line with nearly half consisting of vegan shades, the reality isn’t as pretty. Shades that are purple, or with any sort of a true pink undertone, are not vegan, and the majority of the remaining vegan shades are those I wouldn’t wear (yellows and bright greens). I prefer companies who design an entire vegan fleet, so I’m not disappointed when I find an amazing pink-hued, beige eyeshadow that turns out to have carmine.

I’m not crazy about the shades that are included in the Vegan Palette. I don’t like a couple of the browns or the teal shade. I would have liked to see a palette that had any of the following: Roach, a shade I really want to try, Flipside (emerald/blue green), Green Goddess, Shattered (light blue/green), or Midnight Cowboy Rides Again (golden beige). Maybe in the future, Urban Decay will release another palette featuring some of their other vegan shadows. One can only hope this won’t be the last. o(^_^)o

Anyway, even though I complain about the palette, I’m still planning on purchasing it soon. Ulta does not appear to sell the UD Vegan Palette through their site anymore. The palette is as of yet still available through the Urban Decay site.