July’s True Beauty Box {Veganista} was a good one! Definitely one of the best months since my membership began in April–and a significant step up from June’s box.

It didn’t seem that way when the 17th came and went–the day the True Beauty Boxes (TBB) are supposed to be shipped–with not one word from the company. I received an email the previous month that June’s TBB would be mailed on the 25th, but had assumed that was a one time occurrence. Since the July TBB was also mailed out on the 25th, I’m guessing this is the mail date going forward.

First off, the box was mailed in a plain Priority Mail box (then stuffed in a Priority Mail envelope). Not the old, plain white reusable box with the printed band, nor the new printed boxes that I don’t like as much. I’m guessing the Priority Mail box was to save costs. Or maybe they ran out of the usual boxes by the time they got to me, but that’s okay. I’d rather have a cosmetics bag than a printed paper box. 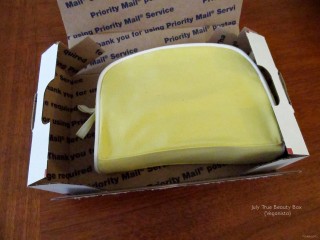 Looks lonely in there with no padding.

Inside I found a pale yellow cosmetics bag filled with goodies wrapped together in tissue paper. Normally there is a box filled with crinkled, paper filling and the products are wrapped inside tissue paper with a little card detailing that month’s products. The included card that was printed on much thinner paper than usual reinforces the thought that True Natural was trying to cut costs for the month. On the monthly card was a 15% off discount code for TrueNatural.com…and I’ve already used it to buy the Lavera BB cream. 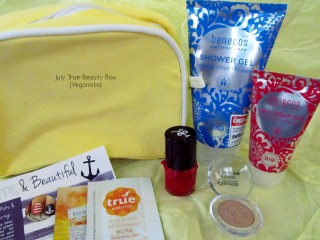 This month’s theme was “Red, White and Beautiful” in an obvious nod to American Independence Day. The theme worked better for the Flirt boxes because they contained red lip gloss, white eyeliner and blue nail polish.

The Veganista box had to make due mostly with red and blue packaging, and the yellow cosmetics bag isn’t helping. Not too big of deal. I’m thankful there’s a vegan beauty box subscription at all.

This was a very nice touch. According to the label, the bag is made from 100% organic cotton. The fabric is a little on the thin side, but I like the pale yellow color/white piping and the organic fabric.

For some reason, I had assumed everyone received a yellow cosmetics bag, but it appears that they are all different colors.

This is a gel with a light, clean, citrus scent. Not much to say. It cleans the body and isn’t drying. I like it, though I’m not sure I would actually buy it. I like a little more scent to my shower gel.

I initially thought this was some type of hand lotion, judging by the small packaging. It wasn’t until after I read the description on the card that I realized it’s actually face moisturizer (with an oddly suggestive caption: “for smooth moments”). This was great timing because I happen to be running low.

To be honest, I have extremely dry skin and didn’t expect much. I need super duper, thick cream. I even had to switch from the DressGreen Protective & Moisturizing Face Cream I adored to Alba Botanica Hawaiian Moisture Cream because I apparently need something developed in a lab.

Despite the label, it’s not a cream but rather a lotion. It’s almost jelly like. To my surprise, this is an excellent moisturizer that works even on my dry skin. I don’t know how benecos managed to make such a moisturizing product, but they did. This is definitely on my short list for when I need to repurchase moisturizer and may even replace my HG Alba Botanica Hawaiian Moisture Cream.

benecos Natural Eyeshadow in So What?

This doesn’t quite fit in with the red, white and blue theme, but I’m always a sucker for eyeshadow. So What? is a lovely warm, neutral shade reminiscent of Silk Naturals Bailey. 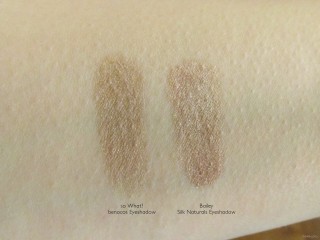 benecos So What? versus Silk Naturals Bailey

It looks shimmery in the pan, but applies as more of a pearl. The texture is smooth and velvety.

The downside is that my pan is wobbly in the packaging, the payoff could definitely be better and the size is on the small side.

I’m fortunate the nail polish was encased in bubble wrap because this sucker leaked all over the place. 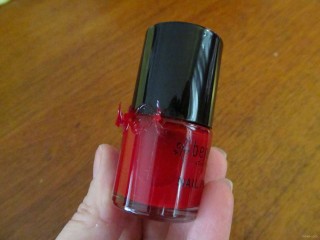 benecos nail polish is 5FREE!, meaning it does not contain formaldehyde, toluene, camphor, phthalates, or colophony.

I always love a good red. You should see my red polish collection. While Vintage Red is a candy apple red in the bottle, it applies more like a really maroon/dark pink that is typical with these sheer reds. It does not have shimmer.

Definitely happy this month. My favorites were the eyeshadow, moisturizer and cosmetics bag.

I can’t wait for next month!