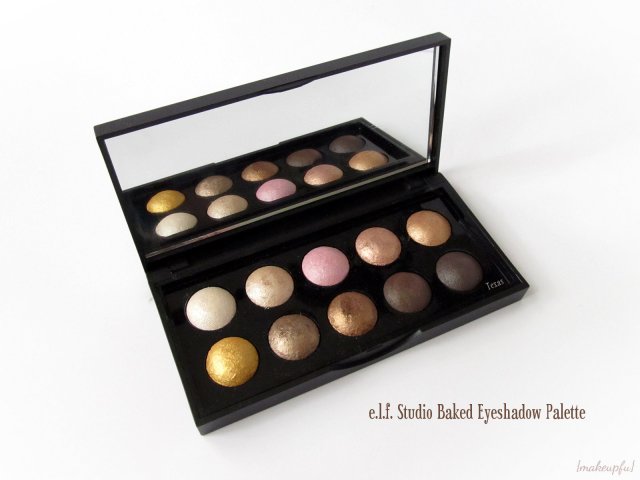 Since the e.l.f. baked shadows are some of my favorite products ever, I figured it was time for me to post a review. As usual, the palettes by e.l.f. are cruelty-free and vegan friendly.

To see my other reviews on e.l.f. Studio baked products, click here.

The baked shadow palettes are packaged in the usual matte black plastic of the Studio line. Unlike the usual smaller palettes of the Studio line that have rounded corners—e.g., e.l.f. Studio Contouring Blush & Bronzing Powders and e.l.f. Studio Tone Correcting Powders—these palettes have squared off corners. After looking at many Studio products, I realized there isn’t another product that has a similar compact except the e.l.f. Studio Blush Palettes. I’m guessing the unique shape is owed to being a Sephora baked eyeshadow palette dupe. 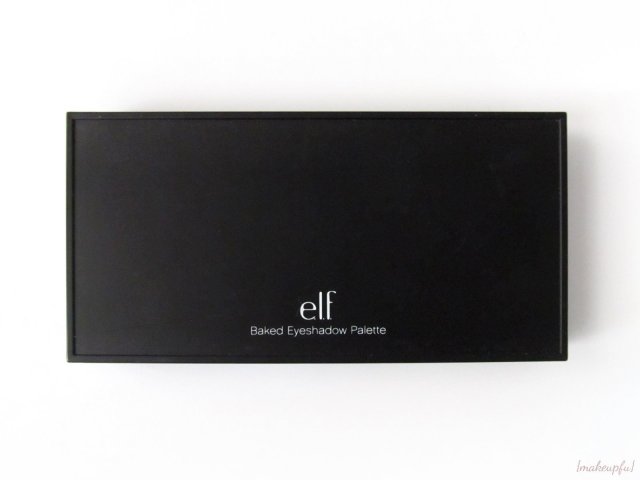 Overall, the shadow palette feel very durable. Inside there is a large mirror that takes up the entirety of the underside of the lid. The domed baked shadows are arranged five shades to a row. Like many baked shadow palettes there doesn’t appear to be a ton of product, but fortunately that baked eyeshadows are very concentrated and last a while. What’s noticeably lacking is a well for an applicator. It’s best to use a brush with the product, so I don’t personally mind the lack of an applicator well.

This has not happened to me, but I have read of many instances where the eyeshadows have broken when dropped, or were broken when ordered online. So do take care not to drop the palettes.

As I’ve mentioned many times on the blog, to most effectively use the baked eyeshadows, you need to use them wet with a good eyeshadow brush. Otherwise you won’t get the proper pigmentation. Any time I see users complaining about the lack of pigmentation, I always suspect they’ve used the shadows dry. I love that e.l.f.’s baked eyeshadows stay put and don’t crease when used wet, even without an eyeshadow primer. Another benefit to using them wet is that there won’t be any fallout, like what usually happens when you apply glittery/metallic eyeshadow. 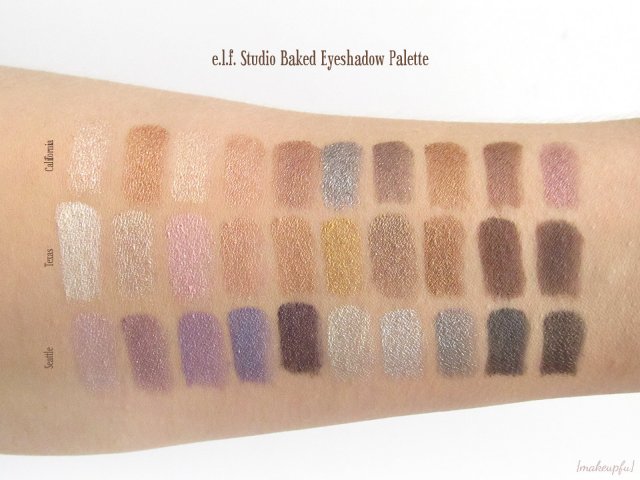 Swatches of the e.l.f. Studio Baked Eyeshadow Palettes in California, Texas and Seattle

All of the baked eyeshadows are shimmery and result in a pronounced metallic finish when foiled. If shimmery eyeshadows aren’t your thing, this might not be the best palette for you.

One issue I have with the baked shadow palettes is that applying multiple colors when wet is tricky and you won’t be able to use most of the ten shadows in one complicated eye look. At best you’re going to use three on the lid, one in the crease, and maybe one to highlight the brow bone—and that’s if you like a ton of shimmer.

There are currently four currently palettes: California, Texas, NYC, and Seattle. Originally there were two palettes—California and NYC—with Texas and Seattle being added later. I’m not sure if this is intentional, but the palettes named after states (California and Texas) are warmer shades, while the two palettes named for cities (Seattle and NYC) are cooler shades. It appears that California and NYC are dupes of the Sephora Moonshadow Baked Palettes In the Nude and In the Dark, respectively. I don’t have the palettes by Sephora, so I can’t comment on their similarities. 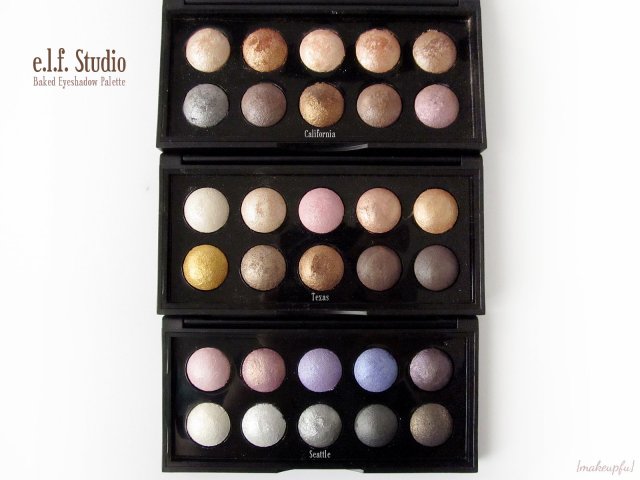 I currently own three of the palettes, with little interest in owning the NYC version. I have had many opportunities to buy it and have resisted every time.

This is the first Studio Baked Eyeshadow Palette I purchased. I bought the palette when it was at Target during the Glam U 2013 promotion. At the time it was sold for $8 USD instead of the usual $10. I went into slightly more depth with the color descriptions in an earlier post that you can read by clicking here. 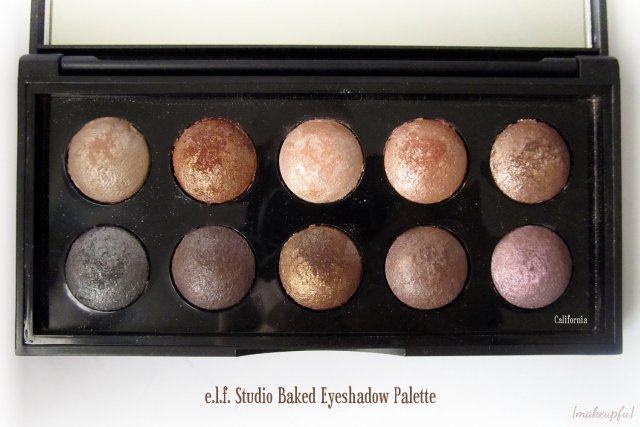 The shades in the California palette range from warm beiges and pinks, to a random pewter grey and lilac.

I go back and forth trying to decide if I like California or Texas better, although the Californian-born person in me rebels at the thought of liking anything from Texas more. There is a wider range of shade tones than is present in the California palette: you have a good mix of lighter and darker tones, as well as the standard medium tones. On the other hand, California is made up of mostly medium tones.

The Texas palette consists mostly of warm beiges and rosy golds with some deep browns and a random golden yellow.

I wouldn’t have bought this palette if not for the name. I spent half of my childhood in the Pacific Northwest and will always have a special place in my heart for Seattle. However, when I think of Seattle, I envision greys, deep blues and emerald greens. Not really purples.

Since my skin tone leans towards the warmer side of the color spectrum, this is a difficult range of colors for me to pull off. I rarely find myself reaching for this palette. Nevertheless, I do find I can wear some of the shades well enough.

The Seattle palette has a wide range of purples from lilacs to violets, as well as some whites and greys.

I find it best to start by applying the lightest shade first, progressively moving on to the next darkest shade. Let eyeshadow on eyelid dry completely, then gently blend with a blending brush.

I know that I insist on using the baked shadows wet, but I also like to take a dry crease brush and apply a dark shade to my crease and/or outer V. I usually aim for a soft effect in the crease. Using a dark shade wet can be too strong and more unwieldy for me.

Even though the palettes are a steal compared to other brands, some may balk at the much higher e.l.f. price tag. If the cost is really bothersome, pick them up during an e.l.f. site sale to get 40%-50% off the regular price. Or try the individual Studio Baked Eyeshadows first to get a feel for them.

The e.l.f. Studio Baked Eyeshadow Palette is a great product and one I highly recommend. Whether you lean towards a warm or cool skin tone, you will find a flattering palette.