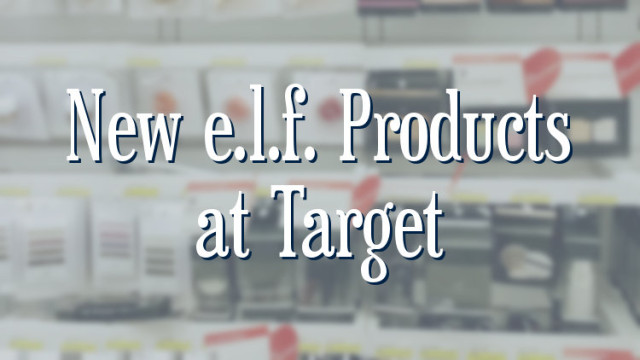 I thought I did a better job at photographing the displays until I got home and reviewed the photos. I kind of panicked when a store employee came by to restock and didn’t get as many photos as I had hoped. I’ll go through the items I noticed to let you know what I missed. Normally I resize my photos, but I have left a few at full resolution so you can more easily see if a particular product is available. 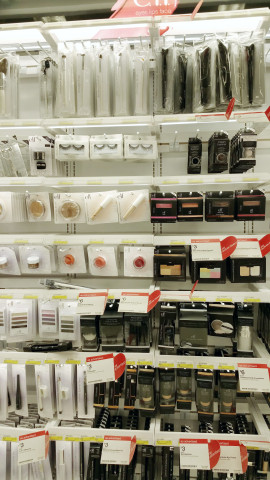 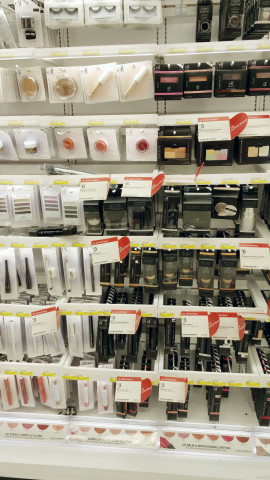 Some of the products left out of my photos are the Studio Blush Palettes (both shades, though the display only had the Light version stocked), all of the Studio face primers, two Studio Baked Eyeshadow Palettes (not stocked at the time of my visit, but there were tags on the display; I didn’t see which two, though probably California and NYC), Studio cleansing cloths, lots of Studio brushes, and more shades of the Studio Moisturizing Lipstick (my review here).

I noticed that the face primers had different colors than are shown on the website/I own. The Studio Hydrating Face Primer that I purchased back in November is a whitish gel in a white bottle. The version at Target is packaged in a bluish translucent bottle with a little water drop below the main text. The Studio Poreless Face Primer is likewise depicted in a white bottle on the website, but is in a pinkish translucent bottle at Target. I’m kind of disappointed that I didn’t get the new bottle.

To get started, the Studio BB Creams (my review here) are now available. At least I’m fairly certain that Target hasn’t carried them in the past. They retail for $6 USD. To the right are the Studio Flawless Finish Foundations. These are not new to Target; I’m just letting you know what’s not in the photo. 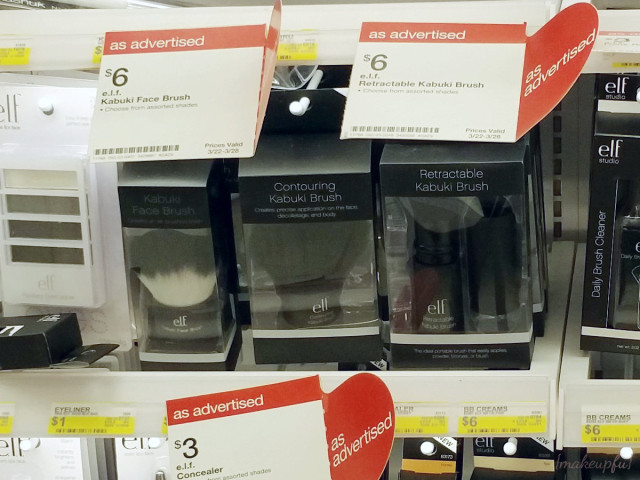 Target now carries the newly redesigned—and newly vegan—Essential Total Face Brush ($2). It’s the only Essential line brush at Target that’s vegan, apart from the old Essential Concealer Brush, although I did see gaps in the display that may be for some of the other new vegan Essential brushes. I didn’t have the means to double check since they were at the top of the display and I’m only five feet tall.

Concerning the Essential line products, there are three shades of the Essential Lip Balm Tint ($2): Peach, Grapefruit and Berry. To the left, there are two or three shades of Essential Smudge Pots ($2). It completely slipped my mind to look for the shades since I think I own all of these and it didn’t occur to me to check. From the photos I can see two of them are Cruisin’ Chic and Brownie Points (e.l.f. trivia time: Brownie Points used to be the name of a shade of an Essential Luscious Liquid Lipstick). I can’t tell if Cruisin’ Chic was doubled or if there was a third shade.

I expected Target to carry the two new Essential Flawless Eyeshadow palettes—Rio de Janeiro and Blushing Beauty—but there were no new shades. I was surprised to see the palettes at all because they aren’t a highly rated e.l.f. eyeshadow product. The Target website does list both new palettes as being limited to stores only, so they may pop up in the future.

Closeup of e.l.f. lip and eye products for the 2015 lineup at Target

Oddly, the Essential Lip Stain in Hot Tamale is listed as $6 at my Target, instead of $2. I didn’t go to the price checker to see if that is really the price, but it’s definitely an error and I’m guessing/hoping it will be fixed soon. I’m also sure Hot Tamale is a new shade to Target. I did notice that it’s not listed on the product card below, so I don’t know what that means.

You may have noticed in the photo above that Target has started carrying the Studio Hydrating Under Eye Primer ($3). I’m still on the fence about the effectiveness of it, but the price is low enough that you can try it without straining your budget.

I thought/hoped that Target would carry the new Studio Intense Ink Eyeliner, but I was out of luck. Maybe it’s too new of a product? 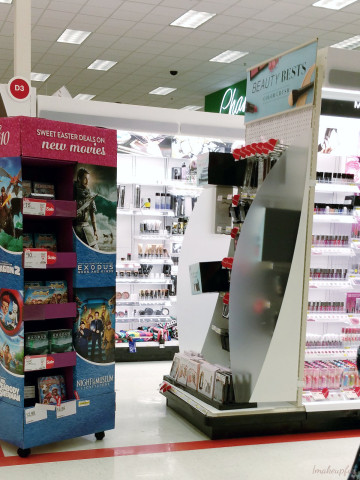 Located on one of the end caps, I found another e.l.f. display. I was really excited until I saw that it wasn’t much of a limited edition display. There are currently only a few items from what I’m guessing is part of the Spring 2015 collection. So far, there’s nothing yet on the official e.l.f. site. The rest of the display featured more Studio products. Maybe there will be more LE spring items in the future? I can only hope so, because this was disappointing. I have suspected/speculated for a while that Target may not be getting as many LE collections as they have in the past. Target no longer has an exclusive agreement with e.l.f., they have had a permanent line for years, and e.l.f. has begun collaborating with other companies, most notably Walgreens. 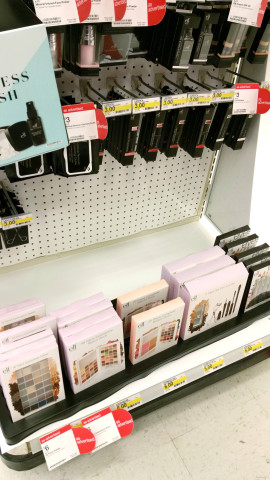 Much of the Studio items in the end cap display are already in the permanent section, but two items caught my eye: the Studio Eyelash Curler ($3) and a Studio Prism Palette ($6) in Naked. I don’t remember if either are part of the permanent display, though I’m fairly sure I worked have noticed a spot for the Prism Palette. It has a very wide packaging, like the Studio Baked palettes, so it’d be noticeable on the display, even if it wasn’t currently stocked, though the Target website seems to indicate that this is a permanent store product.

I did a quick check on Target and there are a couple of items that are listed as being available only through stores that I did not see. One was the Studio Baked Eyeshadow Trio ($4)—all four shades—so keep an eye out for them.

So there you have it. Lots of new e.l.f. products that were released this past year, along with some old favorites. To see all of my e.l.f. reviews, click here.

Excited about the new products at Target? Disappointed by the lack of LE spring products? Let me know in the comments below!