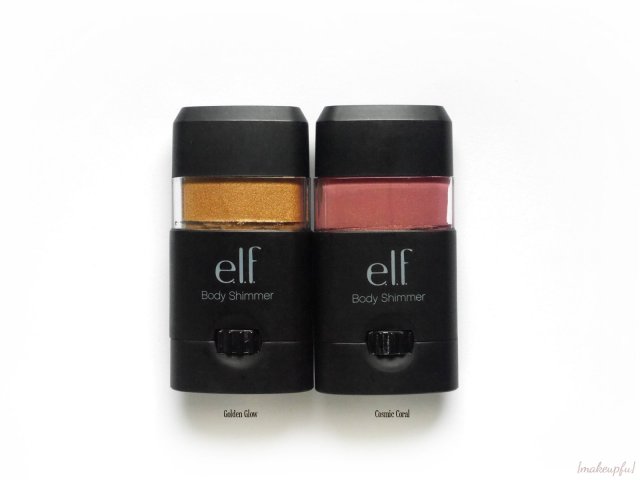 The short lived e.l.f. Studio Body Shimmer is the focus for today’s Throwback Thursday post. Originally the product retailed for $3 USD, like most of the Studio line products. What’s rather strange about the Body Shimmers is that I’m not sure when these were discontinued. It seems like one day they were on the e.l.f. website and then suddenly not.

The Body Shimmers are the only product by e.l.f. to use these deodorant-like tubes—perhaps an explanation as to why they were discontinued. Like most Studio products, the packaging is a satin black plastic, with a window of clear plastic located below the lid. The product is twisted up by an embedded dial that runs through the tube.

These containers would be great to be reused to make DIY natural deodorants. That is, if you managed to use all of the product in the Body Shimmers. 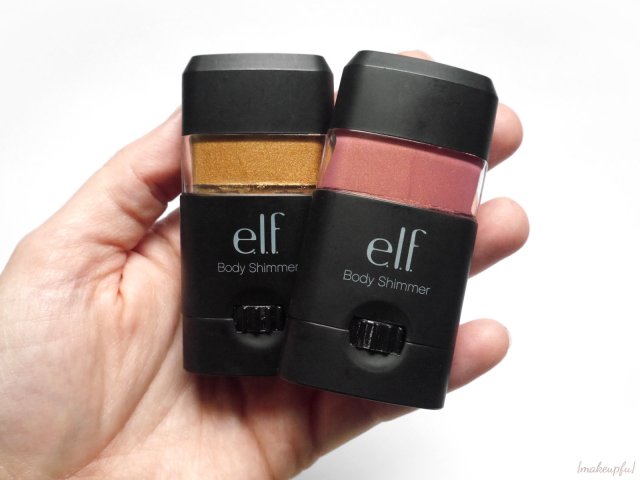 The e.l.f. Studio Body Shimmers are smaller than they seem.

The front of the product has the product type and company name printed in a greyish white on the front. A silver sticker graces the bottom of the tube listing the shade name, product weight, product origin, and shelf life. Unlike many e.l.f. products, the printed label does not rub off easily.

I haven’t had any issue with Golden Glow, but I cannot get Cosmic Coral to twist up. I suspect the spring mechanism may be damaged.

While four shades were available, I ended up purchasing only two: Cosmic Coral and Golden Glow. The other two shades were Mystic Moonlight, a whitish pink, and Blazing Bronze, a cool-toned bronze. You can see a swatch comparison of all four shades here on the Allura Beauty blog. 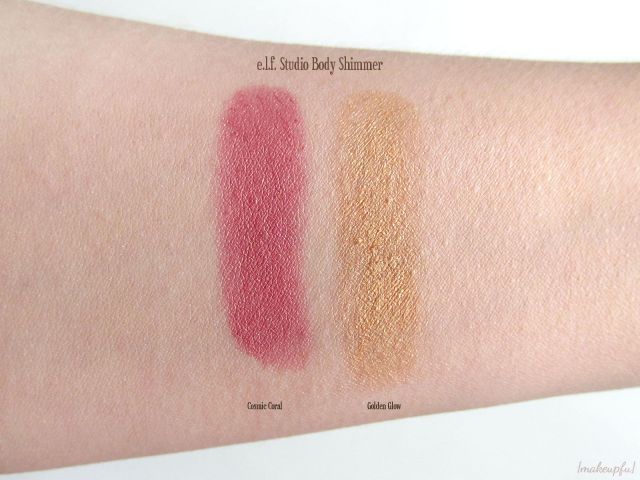 Cosmic Coral is actually a gorgeous shade, about identical to the Essential line’s Pink Lemonade, but with a beautiful pronounced gold shift. The shimmer has a fine consistency and is relatively subtle when fully blended into the skin. The product formulation has a smoother feel to it than that of Golden Glow. 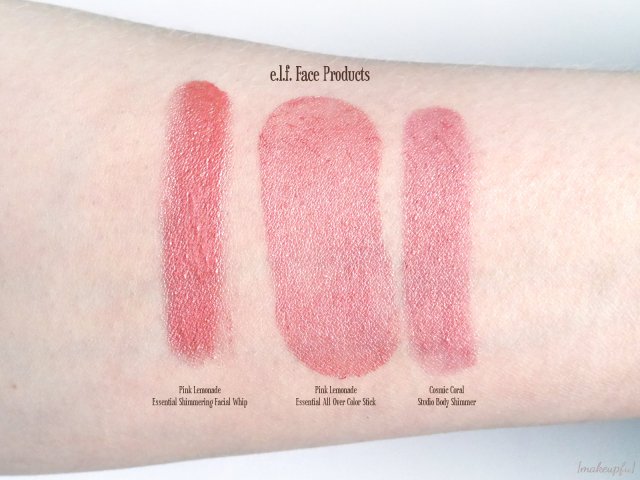 Swatches of the e.l.f. Essential Shimmering Facial Whip & All Over Color Stick in Pink Lemonade,
and the Studio Body Shimmer in Cosmic Coral

Golden Glow is, as the name suggests, a golden shade with hints of copper. Unlike Cosmic Coral, Golden Glow has some very un-subtle glitter, including the inclusion of some odd green flakes. I would recommend discretion when applying it to your face. The formulation is thicker and rougher than that of Cosmic Coral. 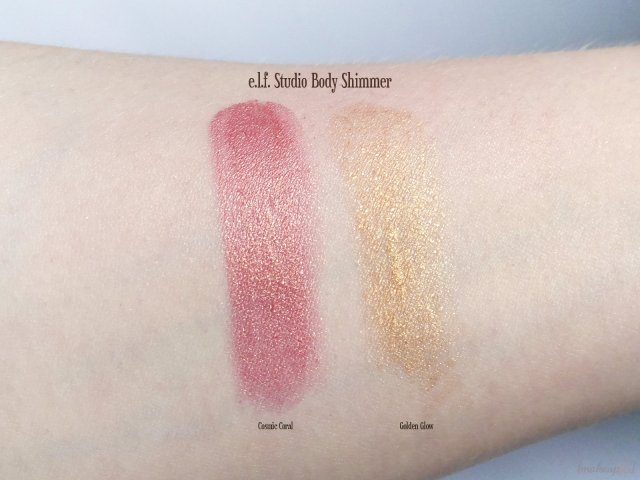 The gold shift in Cosmic Coral is a little clearer in this photo, while the glitter flakes in Golden Glow are also more visible.

Honestly, I’ve rarely used these Body Shimmers since I first purchased them. Cosmic Coral was too pigmented and Golden Glow too glittery. I was looking more for a face product to bronze and blush, but these didn’t perform as I wanted. I just didn’t take to the product.

The product packaging states that the Body Shimmers may be used on the face, eyes, lips and decollete. This is an odd catchall claim since most of the colors are very different from each other and it doesn’t make sense to use each shade for all four areas. Unless you want gold lips. Nonetheless, I decided to try the two shades I own on the various body parts suggested.

Both shades work well enough on the face, whether applied to the cheeks, upper cheekbones, forehead or nose, the main drawbacks being the large glitter flakes in Golden Glow and Cosmic Coral being much too pigmented to be realistically applied anywhere other than the apples of the cheeks. 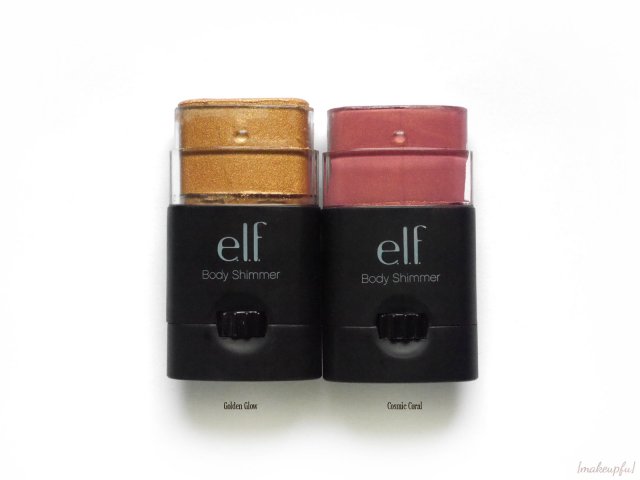 Using the product as lipstick had limited results as well. The similar All Over Color Sticks are advertised for use on the lips as well, but I feel those shades are not proper lipstick colors. That is likewise the case here. Obviously Golden Glow looks very strange, compounded by the dryness that prevented me from getting an even layer on my lips. Cosmic Coral worked better color- and consistency-wise, but the pronounced golden shift relegates this as more suitable for a cosplay convention rather than every day wear.

The two shades I own had mixed results in respect to the eye area. Golden Glow is mostly fine in respect to color, but Cosmic Coral is far too pink for the eyelids, at least for my skin tone. I quickly ran into some fading issues. There was barely any product when I checked about an hour after application. Not surprising since the product does feel greasy. Maybe I would have better luck in winter, but I doubt I’ll try to use the Body Shimmers again on my lids as neither are shades I’d wear as eyeshadow.

The e.l.f. Studio Body Shimmers are one of the rare Studio products the company has discontinued. I’m not exactly sure as to why, though they did appear to be one of the less popular products e.l.f. has produced. On the other hand, I can think of a few extremely disliked products of e.l.f. that are not discontinued.

I’d like to say that I’ve missed this product, or wish I had purchased the remaining two shades, but the reality is that they have sat in one of my backup makeup drawers for most of the time I’ve owned them. There’s something off about the Body Shimmers, as if they don’t exactly know what their purpose is.

If you are looking for a similar product, there are still a few shades available of the Essential All Over Color Sticks.