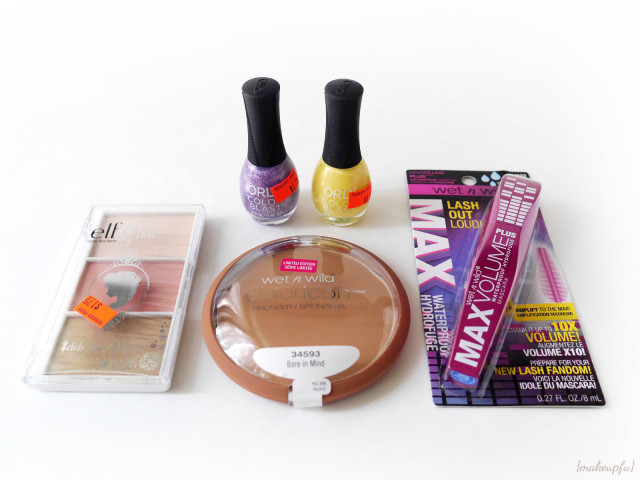 I randomly stopped by Walgreens to see what was happening in the beauty department, and possibly to see if they had put out some super secret Disney Princess Belle from Beauty and the Beast e.l.f. products. Of course I didn’t find anything. My Walgreens always gets LE products weeks after everybody posts their hauls on Instagram.

While the area where my Walgreens usually puts the Disney Princess collections was mostly empty, there also weren’t any new Belle products. That area did have a picked-over display of the Disney Princess Belle Soho makeup bags and I found the Disney Princess Elsa collection was finally on clearance, although there wasn’t much in stock. Mostly a bunch of Ardell lashes ($2 I think) and some ORLY Color Blast polish singles.The only e.l.f. product available was the Elsa Icicle Face Palette. There were also some Frozen themed cotton swabs and random socks. Not sure if the latter were on clearance. 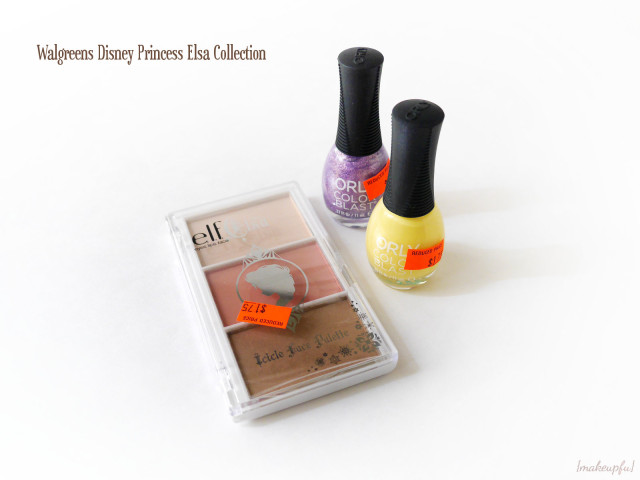 I had looked over the ORLY Color Blast polishes when they were first released, but I was not keen on spending $6.99 for nail polish. $1.75, on the other hand, is something I can get behind. However, it turns out the polishes were mismarked and rang up at $0.75 each. I think I’ll need to go back to pick up some additional shades

I bought Coronation Ball, a purple glitter, and In Summer, a yellow shade. I think Coronation Ball was one of the shades I originally had my eye on. At first I thought In Summer was just a pale yellow, but there are tiny red fire glitters that catch the light (but not my camera apparently). Very nice. I also considered Kristoff He Goes, but it looks very similar to the LVX Prussian Blue I already own.

I examined the new LE collection a little more closely this time. Turns out there were two end cap displays in my store, and I initially found the one located all the way in the back, not the one right next to the beauty department.

Here’s a quick overview of the display. It has a mixture of LE products with some permanent line items. There are two new matte ColorIcon Bronzers that look vegan-friendly. I picked up the lighter shade in Bare in Mind. I still don’t see what’s different about the H20 liquid eyeliner. They don’t seem different than the permanent line. The LE mascaras are all waterproof versions of the originals. Unfortunately, the non-waterproof versions that are vegan now (MegaImpact, MegaLength) have beeswax in the waterproof versions, except for the Max Volume Plus Waterproof Mascara, which appears to be vegan. I’ve had my eye on this mascara for a while, so I thought it would be good to pick up the waterproof version, seeing as I don’t have a lot of those. As stated in a previous post, the Balm Stains and Tints are not vegan.

I once again managed to not buy the MegaLast blue polish Sky Me Mine. I own literally over twenty similar shades so I don’t need it. But then I think about how the original version of the MegaLast I Don’t Need a Refresh-Mint was a dupe of China Glaze’s For Audrey (before it was reformulated to be more mint; the version I own is the second formulation) and this could be a similar shade. Then I consider caving.

As is usually the case, none of these LE Wet n Wild products were on sale. To emphasize the point, the ColorIcon Bronzers from the permanent line located in the California Dreaming display were marked on sale, whereas the matte ColorIcon Bronzers rang up at full price. Apparently putting LE cosmetics on sale is left to the discretion of each Walgreens.

Does anything from the summer collections catch your eye? Let me know in the comments below!