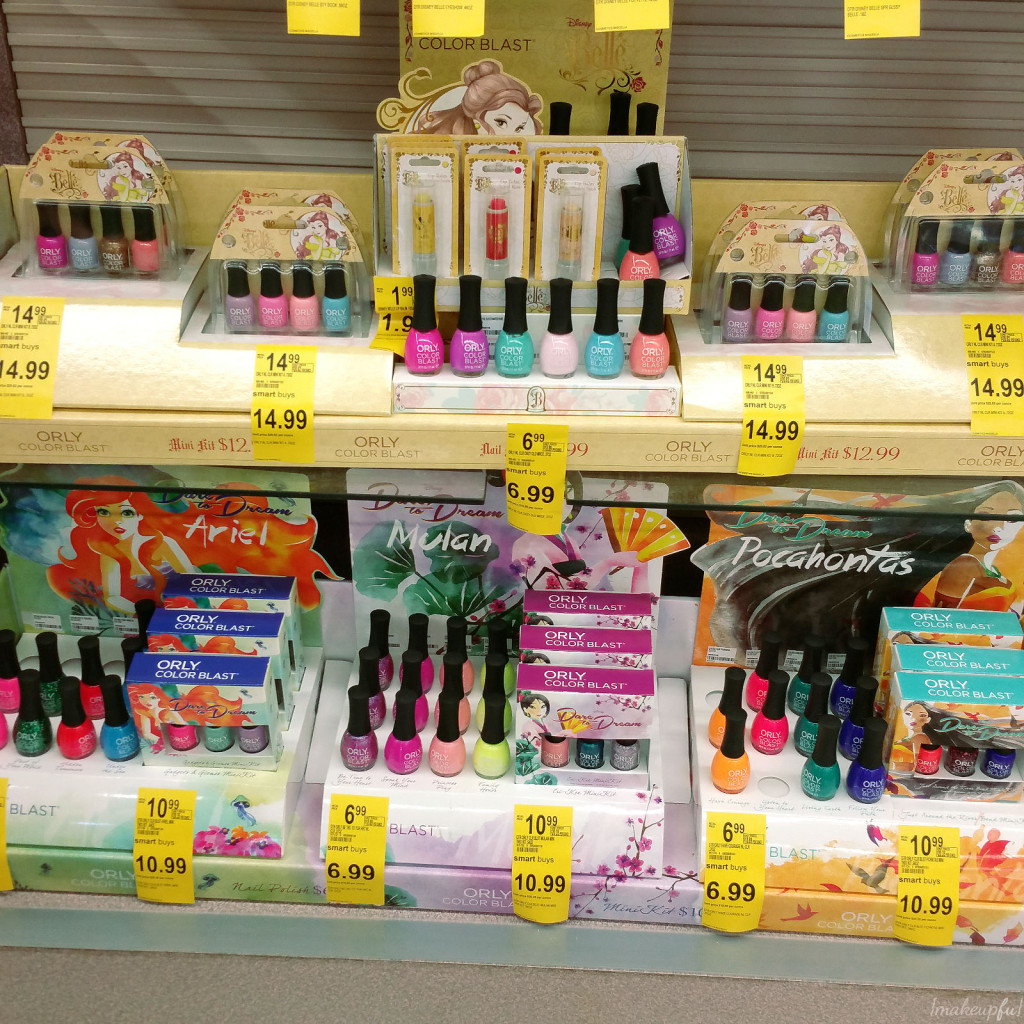 Much of the beauty portion of social media is abuzz over the latest Disney Princess Dare to Dream collection popping up at Walgreens, featuring newcomers Mulan and Pocahontas along with a sophomore appearance by Ariel. I stopped by my Walgreens to find only the Orly polishes available at the Cedar Rapids, IA location. The rest of the display was devoted to Belle products (now available online). The three shelves above the polishes were still very full, so I’m not sure what my Walgreens has planned for the Dare to Dream products. So far the Marion, IA store did not have any Dare to Dream products available. I plan to check my stores again on Wednesday or Thursday.

Unfortunately (or fortunately?), none of the products in the collections are by e.l.f. There are some more lip glosses by Townley, that I wrote about earlier, makeup bags from SoHo (click here to see earlier Disney themed bags from the company), polishes by Orly, with the rest of the products appearing to be manufactured by Markwins, otherwise known as the parent company behind Wet n Wild.

The Vegan Low Down

So what does this mean for vegans?

Unfortunately, the bulk of the cosmetics collection by Markwins, while cruelty-free, are not vegan-friendly. And some products are so close to being vegan, it’s depressing. I’ve seen the ingredients listing for the Mulan Beauty Book and it contains carmine, shellac and beeswax, so prepare for the other two palettes to be more of the same. The Ariel Eyeshadow Quads contain carmine. The Mulan Lip Glosses contain beeswax (but not carmine; grr, so close with those last two).

I don’t know yet if the Pocahontas bronzer is vegan, but I suspect the brush will have natural bristles. If the Mulan eyeliner collection is from Markwins then it is definitely not vegan. The company releases a ton of eyeliner collections during the holiday season and they have never been vegan. I have not seen the ingredients for the the Ariel Lip Set, but I suspect that they too are not vegan.

One sliver of good news is that all three shades of the Pocahontas Retractable Lumizer look vegan-friendly.

Once the Dare to Dream collection is fully released to my local Walgreens stores I will be able to have a better understanding of which, if any, Markwins products are vegan-friendly.

At this point, I am looking to pick up a Mulan cosmetics bag—what I was hoping to find when I visited—a Mulan lip balm by Townley, and the Mulan Orly Cri-Kee Mini Kit polish set (see a theme here?). Mulan is one of the two collections I’ve been waiting for the most since the Ariel collection was released, with Rapunzel being the other.

The Future of the e.l.f. Disney Princess Collections

At first I was very worried about the Dare to Dream collection because I suspected this indicated that e.l.f. would not be releasing Walgreens collections featuring Mulan or Pocahontas. But as I looked into how many princesses there are versus how each collection has been released—and while this is all conjecture and hoping—I realized e.l.f. will likely release Pocahontas and Mulan collections at some point. I also think it would be a very bad move to leave out two of the four minority princesses. That wouldn’t be very inclusive on e.l.f.’s part. The release of Mulan and Pocahontas could be an indication that there collections won’t be released until late next year. Ariel, also part of the Dare to Dream Collection, was the first collection by e.l.f. and Walgreens, and we’re now a year and a half after her release.

There are currently 11 official Disney Princesses—Snow White, Cinderella, Aurora, Ariel, Belle, Jasmine, Pocahontas, Mulan, Tiana, Rapunzel, and Merida. At this time Elsa and Anna haven’t been formally inducted, but of course they will be in time. In any event, e.l.f. has already released an Elsa collection for Walgreens. So that makes 13 princesses total and fits in nicely with e.l.f.’s four princesses a year strategy, with the possibility that Anna won’t have a collection, to even the number.

As I mentioned earlier, this is all conjecture, but I’m still holding out hope for an e.l.f. Mulan collection. I’m going to be so disappointed if she doesn’t.

To see more details and photos of the collections, click here to visit Nouveau Cheap.

What do you think about the new Walgreens Dare to Dream collection? Do you think e.l.f will ultimately release a Mulan and Pocahontas collection in the future? Let me know in the comments below!